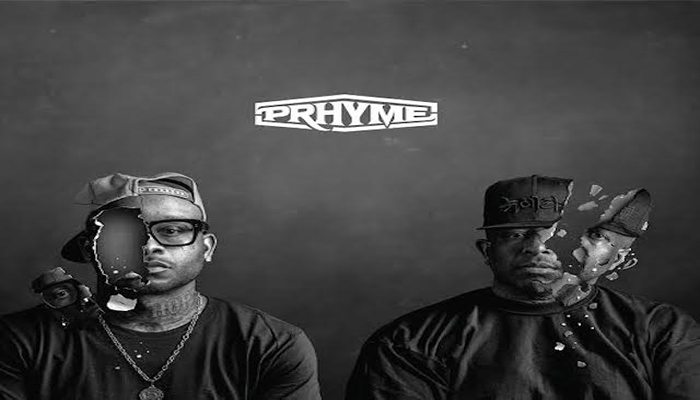 Royce Da 5’9” and DJ Premier’s chemistry together is rooted from the beginning of Royce’s career, as Premo produced Royce’s first hit single: “Boom”.  Fifteen years later, they have numerous hits together, but have only now decided to form a group and release an album under the name PRhyme.  We got The Bar Exam mixtape in 2007, where Royce mostly rapped over old and original Premo beats, but Prhyme

is the first project where the music is all original.  Both Royce and DJ Premier are stepping outside of their comfort zones so that this album wouldn’t be too predictable.  PRhyme features some things we’ve never seen from either artist: Royce working with more guest artists than any other album he’s made, and Premier making the beats by only sampling one artist – Adrian Younge (who produced recent albums for Ghostface Killah and Souls of Mischief).

The album starts out with the self-titled track, “PRhyme”, where Royce tells us to “gather round” as he immediately starts spitting some introspective raps about his former alcoholism, adultery, and money situation.  After rapping about how him and Premier are in their primes, this then leads into some boom-bap, classic-sounding hip-hop over the next few songs.  Those hoping to one day see a Slaughterhouse/Black Hippy collaboration get a small taste of it, as Ab-Soul makes a guest appearance along with Mac Miller on the second song, in a traditional format of 16-bar verses with scratched hooks.  Next is the previously leaked first single/teaser/interlude, “U Looz”, with DJ Premier rapping a little two bars at the end of Royce’s verse.

The next couple songs are slower paced, with Dwele singing the chorus on “You Should Know”, and “Courtesy” having a walking pace to it.  Royce continues to rap with the theme of being in his prime, and things continue to pick up in the second half of the album.  My personal favourite track comes next, “Wishin”, which features a guest verse from Common but stands out by having DJ Premier switch between slow and fast-paced beats.  The rest of the songs all have guest features, as Jay Electronica raps with Royce about the struggles one must go through before reaching their prime on “To Me, To You”, and Schoolboy Q and Killer Mike get in on a traditional freestyle posse cut.  The last song on the album, “Microphone Preem”, features Slaughterhouse making an obvious sequel to one of their first hit singles, “Microphone”.

While this album is short, clocking in at around 35 minutes, it’s pure quality hip-hop all the way through.  People who love hip-hop for the emceeing will enjoy dissecting Royce’s punchlines and following his internal and external rhyme patterns.  His flows continue to improve, as his rhymes don’t always land at the end of his bars, which keeps the listener guessing.  He also makes all the right references, sometimes quoting lyrics from Biggie, Jay-Z and Nas on their classic collaborations with DJ Premier.  I find Royce to be highly relatable, as he spills his mind out in rhyme form and raps about striving to be a better man, while also showing a sense of humour with his punchlines.  His technical skills are still on-point as usual, as he continues to make his rhyme patterns more complex and unorthodox.

Those who are more into the production side of things will love the way this album flows seamlessly from song to song, and the way DJ Premier is able to flip Adrian Younge’s instrumentals into a wide range of hip-hop beats.  It’s good to see Premier stepping out of his comfort zone and succeeding with this experiment.  Even with over two decades of quality music under his belt, Preem is still finding new ways to challenge himself.  Overall, it’s a great album that may have made our Top 25 List for 2014 if it came out a couple weeks earlier (or if we waited a couple weeks later).  I’d imagine most fans like myself look forward to hearing more PRhyme albums in the future.