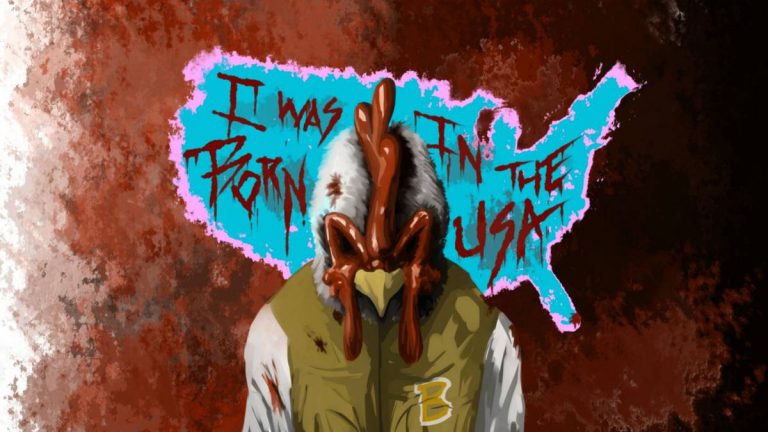 Blood, Sweat and Synths: A Journey into the dank underworld of 1990’s Miami.

It is an understatement to say I have been excited about the release of this game. Hell, I’d even go as far as to say I’ve been as giddy as a schoolgirl.

However, schoolgirls should not play this game. It is a brutally violent journey into the human psyche, cultism and slamming 80’s basslines.

Let’s back it up a bit. Hotline Miami (the first instalment in this phenomenal series) was a fast-paced, tactical top-down beat-em-up. Brought to us by the geniuses at Dennation Games and published by Devolver, this masterpiece allowed violence, thumping tunes and amazing storyline to invade my life.

You play the role of a masked man in a Letterman jacket (known by fans of the game simply as Jacket), receiving mysterious orders from your telephone. Upon getting your orders, you progress to a location and systematically murder everyone in the building. You have a choice of stealthily and tactically defeating your enemies with your bare hands and melee weapons, or grabbing a firearm and going ape-shit on everything in sight. Both methods are equally satisfying, although the game rewards you for taking risks.

In HM2: Wrong Number the style of gameplay is the same, although certain characters have different weapon mechanics. The story flits between this myriad of psychopaths, allowing the player to experience the story from multiple angles, rather than the Jacket oriented path in HM1.

Towards the end of the first game, it becomes clear that Jacket is being manipulated into killing the entire Russian mafia by a secret neo-nationalist cell known as 50 Blessings. His fate is shared by other such hitmen, but Jacket is propelled to fame in the time after the culmination of HM1 and his trial, and subsequent sentencing is broadcast for the world to see.

Wrong Number continues from Jacket’s legacy and focuses on how various groups had been affected. With the Russian Mafia weakened almost to the point of non-existence, crime is rife and unorganised in the city.  Playable characters include ‘Manny’ Pardo, an ageing detective with a passion for brutality and solitude; A group of 4 youths known as ‘The Fans’, imitating Jacket’s crimes to stem their ennui, and Martin Brown, an actor portraying Jacket in a film called Midnight Animal, who is slowly losing his grip on sanity. There are more characters who surface throughout the game, but I’m loathe to spoil too much of the story for you.

As far as gameplay goes, they have managed to improve it since the first game. The movement and aiming feel a lot smoother, as do the bullet interactions. New weapons allow for more variety in combat, as well as a heavier focus on intricate level design which allows for more succinct planning of routes. What remains the game-changer for me is that Wrong Number, like its predecessor, is infinitely playable. It doesn’t matter if I get brutally gunned down 300 times in a level as long as I nail it that 301st time, especially with the new mixture of characters making it very hard to get bored of a playstyle.

Now, I know I harp on about OSTs a lot, but music in video games is very important to me. Which is why I am delighted to announce that Wrong Number absolutely delivered. With resurgences from incredible producers, such as MOON, the soundtrack promises to have you bopping your head along with every caved-in skull.