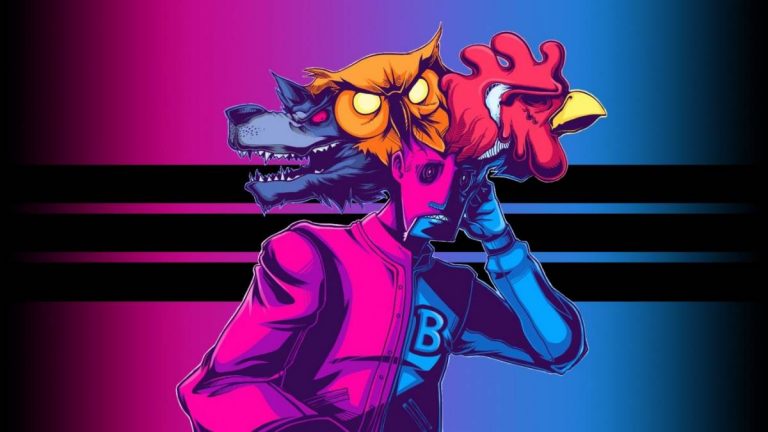 Jimmy Donnellan reviews Hotline Miami in anticipation of the sequel later this year.

It may be a bit slow off the mark to review this wonderfully bizarre 2D actioner in the year that the sequel is coming out but as it flew under the radar somewhat, it’s only fair that we jump on the bandwagon which is trundling along quite nicely. And what a bandwagon it is.

I mean it very kindly when I say that Hotline Miami is unlike any game that’s come out in the past ten years as its nostalgic and original qualities seep through every pixel. The tone and style reminds me a lot of the games your elder relatives would have on Mega Drive that you weren’t allowed to play, so you had to stick with Sonic the Hedgehog.

There’s a lot to be said for a game that opens with a scene which involves three people all wearing animal masks that somehow retains its credibility. You assume control of an unnamed hitman/manic (it really depends on your interpretation) in a nightmarish venture into his psyche and his biggest jobs and sure, the story may not be the most gripping or involving but it certainly keeps you wondering what the fuck is going on.

The gameplay itself is as difficult as you’d expect from a retro indie venture: the A.I is relentless and unforgiving as a single slip in battling through some cronies’ lair will see your face getting smashed in with a lead pipe in a millisecond. During my playthrough, I couldn’t help but feel that Hotline Miami deserves a place in the rhythm genre – learning the patterns of the enemies as you try to avoid detection and the inevitable shitstorm that follows requires a lot of dedication and will require lots of precision and timing. This is certainly no Call of Duty.

You may have read a review for Hotline Miami before and noticed the author fanboy’d something fierece about the soundtrack. Well, prepare yourself for much of the same here as the music in Hotline Miami is probably the best audio experience you’ve had in a game since getting in your first car in Vice City and blaring out Billie Jean. The mania of the electro perfectly complements the brutal gameplay and Drive-inspired aesthetics with tracks from the likes of M O O N and Sun Araw hitting home perfectly. You may find yourself constantly putting the controller down and just enjoying the sounds that come out of your demented, delectable 8-bit adventure.

At the start of each job, you are given the choice between several masks that are called people names and are often hilarious. Strapping up with a Peter the Unicorn mask is completely surreal but each offers their own power-ups, affecting the way you play. For instance, if you prefer you action to be on the stealthy side then you may want to opt for Louie the Chameleon but feeling slightly Rambo instead? Then Earl the Walrus is your guy.

The difficulty level of Hotline Miami is also strangely satisfying as previously mentioned, one little slip and you are done. However, the payoff is huge once you’ve cleared a building of enemies and make your way back to your Delorean-esque car, tiptoeing around dozens of corpses in the process. That’s not odd right?

It’s actually quite difficult to say anything negative about this almost masterpiece so I guess it’s just a case of nitpicking. Aiming can sometimes be ever so slightly twitchy and a feeling of repetition can creep in a little at the end but apart from that, it’s  very nearly perfect.

I implore you to pick up this modern classic if you haven’t already. It’s free on Playstation Plus to PS3 owners for the foreseeable future and the second instalment is out sometime late in 2014.