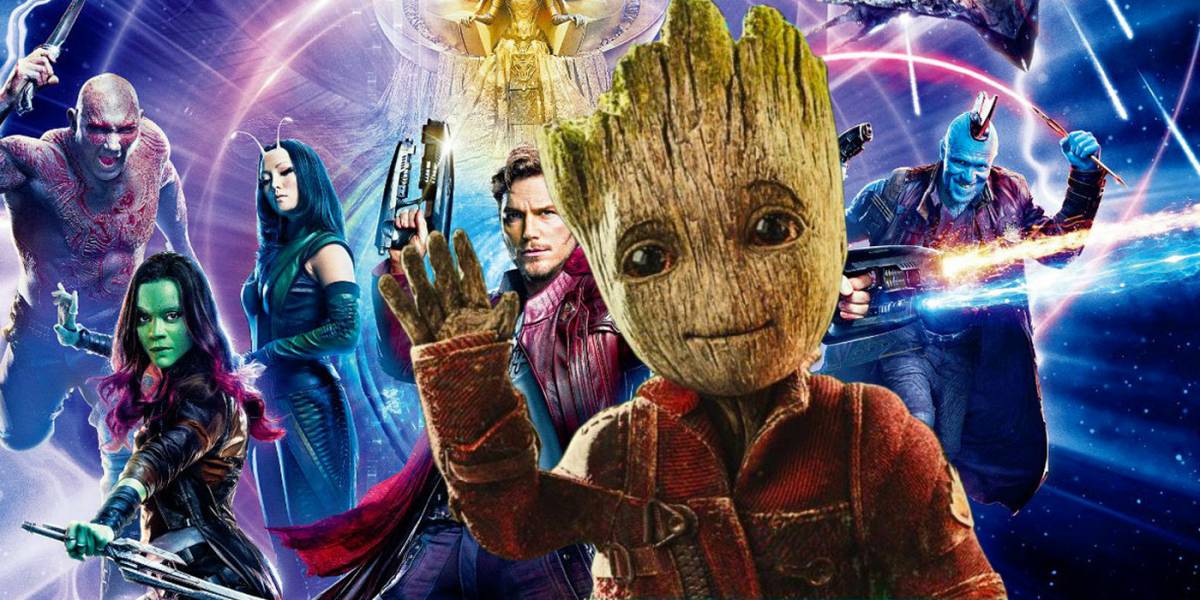 For the sake of full disclosure, I didn’t go into Guardians of the Galaxy Vol. 2 completely blind. I was aware that the first film had been released, I saw the posters, and – because I don’t live on the moon with my head buried in the sand – I was aware of the Grootnomenon. Which is why it was such a surprise to meet him in the form of a little CGI nugget dancing away through the opening credits, rather than as the better-groomed Treebeard I’d been led to expect. ‘What happened to him?’ I thought. ‘Is this his illegitimate son, also named Groot? Or did he get bonsai’d between films?’

To be honest, nothing particularly wrong-footed me – the main gang are all strong enough character archetypes that their motivations and group dynamics are fairly obvious from the get-go without the need for ham-handed exposition. Everyone understands the need to fight big gribbly monsters; possibly for fun and profit.

One common complaint about superhero movies – particularly in the light of countless reboots – is that everyone knows the origin stories. You don’t need to dedicate the first half of yet another installment to something everyone knows already. Peter Parker has been bitten by enough radioactive spiders for a whole horror movie’s worth of jump scares, and Bruce Wayne has lost so many parents it’s like he was born into a cult. So Guardians of the Galaxy Vol. 2 sort of felt like an antidote to this, even though a major narrative thread is Chris Pratt’s origin story – but this gels, because we don’t know it beat for beat already. I mean, I certainly didn’t.

The only scene where the narrative thread wasn’t immediately obvious was the one in which Sylvester Stallone turns up to unceremoniously boot Michael Rooker’s blue Texan alien out of the Ravager community. Even then, you could assume this was down to some kind of misdeed in the first one. Rooker’s actual relationship with the rest of the gang becomes clear very quickly just through context (and some dialogue that doesn’t slow things down too much), to the point that when he sacrifices himself for Pratt – even if you’ve not actually witnessed their surrogate father-son relationship – it lands properly and bears the weight it deserves.

Green Zoe Saldana also manages to fit in her origin story, or at least sibling drama with purple Karen Gillan that leaves you with a solid idea of what their childhoods were like and how that made them the people they are. Perhaps it’s a little predictable that Karen Gillan teams up with the gang after a minute or so of them talking things through, but it’s a superhero movie and they need all hands to the tiller against a threat to all life in the universe, so it sort of gets a pass.

This hits on another salient point – GotG does the whole ‘roving band of misfits and lunatics,’ in my opinion, a lot better than Rogue One did. Rogue One feels like it’s getting dangerously overloaded with protagonists, much less so GotG, even though I’m pretty sure they actually end up with a bigger gang. This is probably due in equal measures to the GotG gang being a lot more distinctive (literally painted different colours) and to them not instantly splitting the party once the climax begins.

While they walk a fine line, none of the gang ever fully degenerate into being straight-out comic relief. Even sub-par mutineer Taserface doesn’t, keeping up a veneer of genuine threat even while everyone he encounters mocks him for being called Taserface. Of the central cast, it’s the more SFX-heavy members run closest to being comic relief, with the most obvious example being Dave Bautista as volcanic The Hulk, but even his hilariously floundering attempts to grasp our puny hu-mon ways are tempered with a real sincerity about them. Rocky Raccoon cracks wise throughout, but this is what you’d expect from his sort of devil-may-care gunslinger. And as for itty-bitty Groot – well, his incompetence does seem a little too precious at times, but they don’t overuse it, and he pulls his finger out when it really matters in classic protagonist style.

Everyone’s clearly having a lot of fun, which I put a lot of stock in assessing most films – possibly none more so than Kurt Russell, who I initially mistook for Jeff Bridges. He serves as an appropriately omnicidal comic-book villain made of special effects, but beyond that is a wonderful, Faustian, tempting villain, the kind who seem like an honestly decent bloke until all of a sudden they’re very dramatically not.

He’s actually most of the way toward getting Chris Pratt on board with his supervillainy before the mask slips – amusingly, the plan is to get Pratt to join him so they can rule the galaxy together, as father and son. In fact, to stick with the Star Wars analogy, because heavens knows it’s giving me little choice, it’s famously said of A New Hope that you could grasp the story with the sound off, so strong is its visual direction, and it’s possible the same applies here. As I said earlier, everyone understands what’s going on when a ragtag bunch of misfits fight a gribbly monster. The planet of living statues are prideful and up themselves, as you probably would be if you were made of gold. And Kurt Russell starts off surrounded by such a delightful CGI-scape you might even think he’s ultimately well-meaning yourself (before he becomes a huge monstrous face).

I rate Guardians of the Galaxy Vol. 2 one and a half Return of the Jedis out of Star Wars, by which I mean it’s like the ewoks are more charming and not just a cuddly mascot built for the toy market.