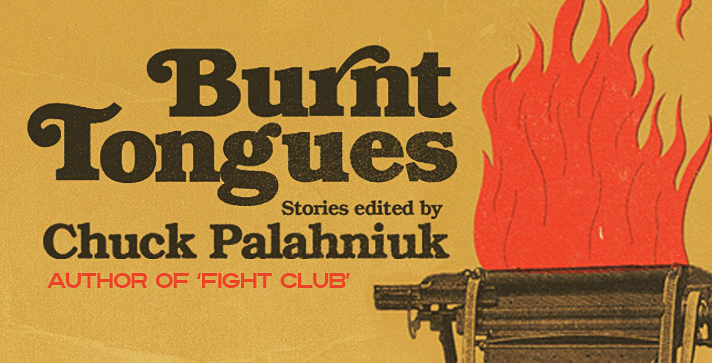 The first story I read in the workshop where the Burnt Tongues anthology was conceived was “Heavier Petting.” It’s featured in this collection, naturally. After reading it, my innocence was forever ruined. I caught the infectious writing bug. The one that makes you read and write sick and twisted stories like “Heavier Petting.”

The introduction by Chuck Palahniuk isn’t something to skip if you don’t like reading introductions. This is one of those rare cases where the introduction is as entertaining as the stories. And don’t pass this book by if you aren’t a fan of anthologies, short stories, transgressive fiction, or damn fine reading. This long anticipated book is the best one I’ve read all year.

These stories are disturbing and addicting. They range from the subtle but baleful to gut swirling, mind raping tales of despair. So if you compare them to Bret Easton Ellis’s books, they would respectively be roughly equivalent to something between The Informers and the gruesome scenes in American Psycho.

Take for example the story “Mating Calls.” The story revolves around a vet student’s sexual frustrations, his disappointments, and existential crises. The story ultimately delves into the emotions and psychology of a character so human that it reads like a diary. There is no disembowelment, decapitations, or anything else so commonly associated with the genre of this book.

“Day and night, the dominate male protects his nest, and all his labor finally pays off when a female shows up to spawn. Soon as the deed is done he kicks her out and goes right back to defending his territory, all while fanning his tail to aerate the freshly fertilized eggs.

“Only one thing ever lures him away. Another hot female to spawn. The second he leaves his nest all his hard work goes down the drain when a weaker male zips in and re-fertilizes the eggs. Nature’s equivalent to a drive-by shooting. They call these fish sneakers.”

The writer cleverly reminds us throughout the story that we are not as evolved as we like to believe and that a hierarchy still exists, that we are animals and only the strong survive to go on to reproduce.

On the other end of the spectrum we have a less subtle story titled “Engines, O-rings, and Astronauts.”

“I didn’t kill Mrs. Alphabet, but I helped.”

The writer of this story shows us that even our darling children aren’t free from primal instincts and the dark side of human emotions and behavior. They are more susceptible to these things.

“And Freddy came to class twenty minutes late, his daddy’s old shotgun swinging at his side.”

Every fan of dark fiction should have this one leering from their bookshelf.
And I will leave you with a teaser for “Heavier Petting”:

“When she tells it her way, with all the graphic finery and ruined upholstery and crawling and bucket of generic lube, half the room empties before the part where she straps on the spiked collar.”

“The last time I heard her tell it there was this torso guy listening in–just a head and rib cage. He’ll lie on the floor at goth/industrial nightclubs and pay gals to walk across his chest in stiletto heels. Pinned down, he looked up Redemption’s skirt and said, ‘Now that’s twisted.'”

“At one party we ditched out to avoid the looks while Redemption told her tale. He told me that contrary to popular belief the human egg can actually be impregnated by canine sperm.”