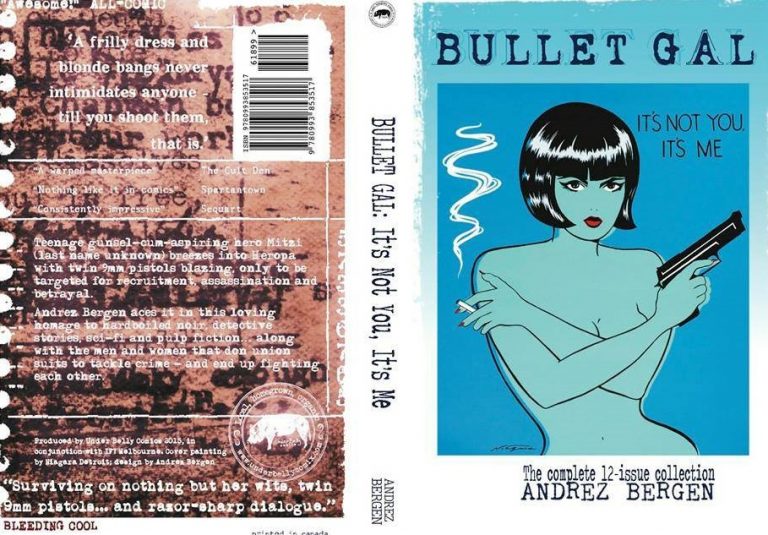 For anyone who knows Bergen, you know he may be one of the busiest people in the industry. In between releasing music under the moniker Little Nobody, novels and short story collections, he’s founded IF? Commix, releasing 12 issues of Bullet Gal, and after a successful Kickstarter, UnderBelly Comics has released them all together, in a collected paperback. An Australian living in Japan with a wife and child, Bergen spins so many plates I’m surprised his day job isn’t supplying them to a restaurant.

Bullet Gal is a homage to all things pulp and noir. It acts as an expanded look into the character of Bullet Gal – original name Mitzi before she inherited those two pistols in each hand – from Bergen’s 2013 novel ‘Who Is Killing The Great Capes Of Heropa‘? Though don’t worry, no prior knowledge of the canon is required, because Bergen lures us in with interesting characters, great art and storytelling so tongue-in-cheek you’ll be surprised it doesn’t pierce through to the other side.

The art style various from issue to issue, Bergen invited guest artists with a variety of styles to contribute to this tome. While initially this may seem off-putting for those who flick through the pages, it is actually one of the most interesting things about the comic. Like any great short story collection, it breathes with different voices, rather than falling into one single tone. It’s obvious that these stories were developed across a period of time because each issue adds something new to the expanding mythology that the reader is introduced to, or already familiar with.

Bergen’s voice as the narrator and through the characters is another example, of many, about what shines through in this comic. Bergen speaks with a bizarre mix of Australian slang, Gentleman’s English and Japanese politeness. Oddly enough, it works. A vocabulary that you thought was left in the world of cassette tapes is resurrected back into the mind, filling you with a bliss state of nostalgia that only exists in old movies and stories your grandparents told you.

Bullet Gal herself is an extremely interesting character: witty and deadly. Her archenemy is femme fatale, a French assassin, so deadly and beautiful she makes Uma Thurman’s The Bride look like she could learn a thing or two. Though, Bergen show’s his mastery of the pulp and noir genre by not letting these women fall victim to the tropes and clichés that we see so often in homages. These are powerful women, more powerful than the men who they choose to work for.

Bullet Gal is a collection of everything that Bergen knows best, and he knows it. Within these beautiful drawings are beautiful words, all coming together to create one fantastic expansion of the universe that Bergen creates. It doesn’t matter if you’re looking for Blade Runner of The Matrix because, in these pages, something exists for you, calling to you, with a pistol aimed at you, just to be safe.