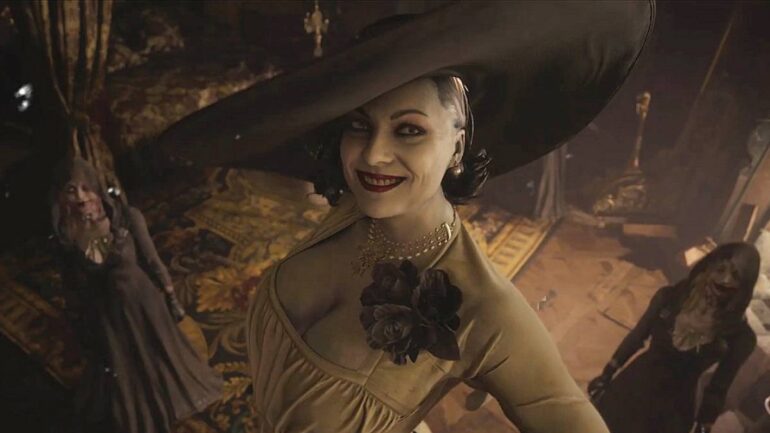 2021. It has been what some call “a year”. To celebrate this collection of sun rotations, we’re looking at the best games of 2021. Next up: Resident Evil Village.

The Resident Evil series is known for its scares. As one of gaming’s premier horror franchises, you can only reach that level of notoriety without providing some spooks along the way. The dogs through the windows of the mansion in RE1, the Las Plagas parasites bursting through the heads of villagers in RE4 and the entirety of RE7 all stand out as scary moments, but the series hasn’t been afraid to lean into what can only be described as “dumb bullshit”.

From the cheesy FMV opening of the first game, Leon’s grand suplexing adventure in RE4 or Chris Redfield’s boulder punching exploits in RE5, Resident Evil has always flirted the line between genuine scares and genuine silly bollocks, but none have been quite so silly as Resident Evil Village. In a lot of ways, Village is Resident Evil at its silliest, and it’s frankly one of the best entries in the entire series. Perhaps that’s not a rousing endorsement from a noted R3make apologist, but there you go.

Ethan’s madcap journey through the spooky, rural side of Europe feels like the end result of a production meeting whiteboard filled to the brim with sticky notes, with everyone trying to cram in their own input.

“Uh, people are tired of zombies and weird bioweapon monsters, what can we do to freshen up Resident Evil? Remember, there’s no wrong ideas.”
“Werewolves!”
“Tall vampire lady!”
“Wolfenstein-esque super soldiers!”
“Something water-based that’s like Jaws but with a weird blob monster, I guess!”
“Creepy porcelain doll!”
“Looks like we’ve got another hit, lads!”

About the only thing missing from Resident Evil Village is a surprise Hulk Hogan cameo and it’d be about as daft as a Gremlins movie. Oh, wait a second, maybe it is a Gremlins movie after all.

Look, I won’t lie and say that Resident Evil 7 isn’t a better horror game, because it is. Aside from a section involving the aforementioned doll and its pet baby, there’s not much in Resident Evil Village that actually invokes terror. This is an all guns blazing jaunt through horror media tropes galore, and it’s absolutely beautiful. Sure, 7 might have had a more consistent tone of “eerie bayou freakshow”, but Village seemed to revel in its own unpredictability. Say what you want about the game, but it was hard to predict where it was going next.

It helps that the actual gunplay feels a lot smoother and responsive than it did in 7, making the moments between the silliness more fun. You’re not running away from fights in Village (unless you’re on the highest difficulty anyway), you’re actively seeking them out because it means more opportunities for fun. Those hidden bosses and targets are more enticing, not just because of the rewards you receive and the upgrades you can buy, but also because the game is just so fun to play.

Still, those additional upgrades you can purchase are the added spice on top of an already brilliant package once New Game + rolls around and you dig into the game’s challenges. Again, RE3 had the right idea with its Bonus Shop and the ability to strengthen yourself in future playthroughs without having to earn top grades in the first place to do so, and seeing Village take that philosophy on board is absolutely wonderful. Granted, I still need to finish those additional playthroughs, but you know how backlogs are.

Village is by no means a perfect Game of the Year, but that’s not a debate I’m looking to have, because it’s unquestionably one of the most memorable games of 2021. It achieved that through one simple decision: leaning into its own bonkers nature. It’ll be incredibly interesting to see where it goes from here.