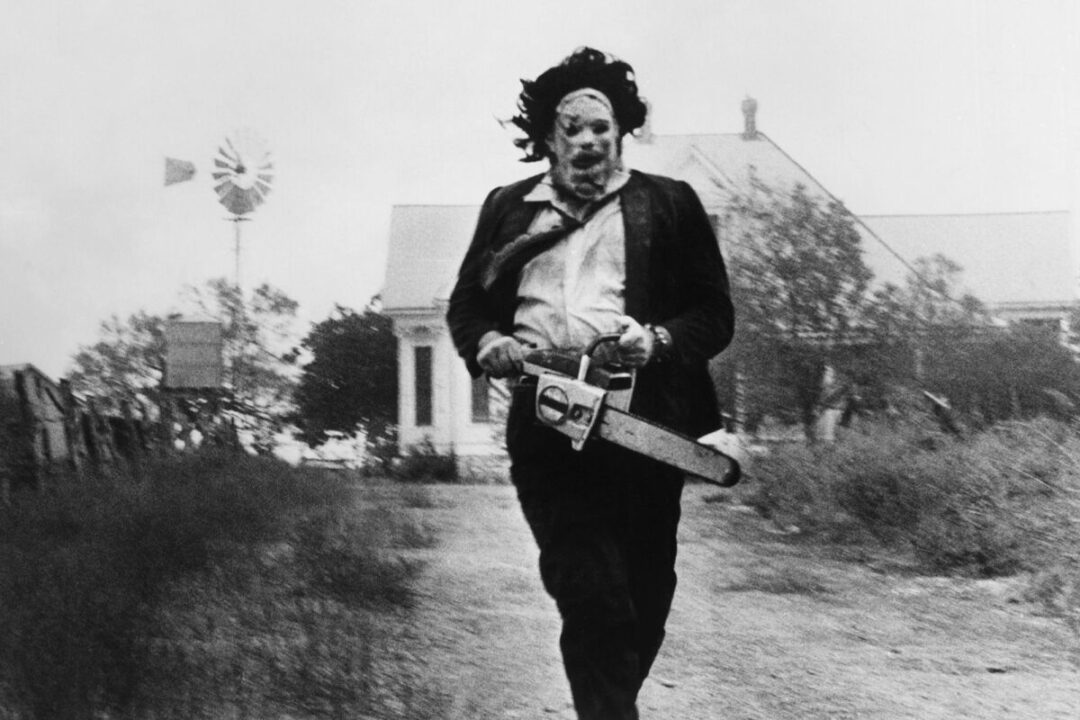 No, not really, but it did start from “I haven’t seen The Next Generation in a while. That might be fun.” The fourth film in the series, it has always been a sentimental favorite. Assuming sentiment even applies to a group of films that began in 1974 with Tobe Hooper and Kim Henkel.

Next Generation was filmed in the mid-90s. It was released, shelved, then given a wider release later to take advantage of the rising fortunes of its two stars (Renée Zellweger and Matthew McConaughey). It’s a mess, but it’s a pretty grand one at that. I thought so at age 11, and I still actually believe that.

I strap in to watch that. Then I start reading about the movie on Wikipedia. I realize that I haven’t seen Texas Chainsaw Massacre III: Leatherface in about 25 years. Why not?

This double-feature proceeded to quickly transition into “You know, I haven’t seen the 2003 remake in a really long time. I hated it then, but how about now?”

“I haven’t seen the prequel to that, come to think of it.”

“My god, there’s two more after that? I guess I’ll watch those, too.”

Why not indeed. I watch movies while I work on freelance gigs. I had a lot to do that day. I knew it wouldn’t be hard to burn through six movies. Especially with running times in the 90 to 100-minute range. The best Texas Chainsaw Massacre movies do not waste a lot of time.

I didn’t need to watch the original, or its inspired sequel. Both of those movies wind up in rotation about once a year.

While I don’t recommend watching six of these in a row (I felt a stupor created by 9 hours of brutal screaming and chainsaw noises), I’m glad I can say I’ve seen the whole run of these films released thus far. The sequels have created some fascinating tropes and overarching themes. Some of them have tried to retain, or gently parody, the grimy, instinctually intense tone of the original. Others have tried to use the characters and basic essentials to go in a different direction. One which would hopefully open up the potential of its cinematic universe.

Most of the Texas Chainsaw Massacre films are at least interesting. A couple of them are classics. The six I watched recently surprised me in a number of ways.

Combining limited resources, the politics of the day, traces of Ed Gein, a thought that occurred to Tobe Hooper at a department store, and more, Tobe Hooper and co-writer Kim Henkel crafted one of the most important horror movies ever made.

Even if you don’t care about its potential politics or inspirations, what you’re still left with is a ferocious, grimy, and relentless story of some poor kids, who get stuck in approximately the worst imaginable scenario with the locals of an area they’re passing through. Nothing in this franchise has ever, or, for me, will ever top the implied and depicted violence and numbing heat of the original The Texas Chainsaw Massacre.

With several notable performances, including Marilyn Burns as one of the most memorable , and Gunnar Hansen, creating a horror legend in Leatherface, The Texas Chain Saw Massacre remains riveting. It is also a good example of a horror movie where your relief for any alleged survivors is virtually non-existent.

A massive, controversial success, TCM didn’t set out to become a franchise. Yet it did. Because of the starkness and straightforwardness of the first film, it has become one of the stranger examples of a long-running horror movie series.

An impressive 12 years later, Tobe Hooper returned to the Sawyer clan with a decidedly different tone from the original. Doubling down on the gore, while shaping the fast-paced cruelty and madness of the original into something seeped in black comedy, it was a return that I like a little more every time I see it.

A crazed relative (Dennis Hopper) of the previous film’s survivor teams up with a radio DJ (Caroline Williams) to destroy Leatherface and the rest of the family (which includes an amazing performance by Bill Moseley). Again, it’s a decided tonal shift, but Hooper keeps things delirious and unpredictable.

The Texas Chainsaw Massacre isn’t quite as unsettling as its predecessor, but it has everything else that’s singular to this series.

If you don’t want to read any further, I’ll understand.

One of the lowest-ranked entries in the series for most, I wish I could make a longer case for this prequel to the controversial (among fans) 2003 remake of the 1974 original.

While not particularly innovative, The Beginning, which I saw for the first time recently, is surprisingly effective in using the essentials of these movies. These movies are about absolute destruction. This includes all characters, any notion of sanity, or any hope of things returning to “normal”. The world of these movies is normal in its own context to begin with. It just veers between quiet and howling approaches to that normalcy. The Beginning takes to the idea of destruction with an enthusiasm that I found surprisingly admirable.

The Beginning expands on Leatherface in ways that are mostly interesting. The “iconic” moments of his development is tempered with an evolution of personality that turned out to be a lot more interesting than I ever would have imagined.

The movie also features one of R. Lee Ermey’s best performances, creates two interesting, similar-yet-competing ideas of family and family dynamics, and actually leaves us with a meaningful expansion of the Sawyer family.

4. Texas Chainsaw Massacre: The Next Generation (1995)

Kim Henkel returned to the series to not only write, but direct what at least sounded ambitious on paper. The result is one of the strangest sequels in horror history. Poorly handled in its initial release, the movie was released much later in wider circles.

Like some of these sequels, the movie, which is a loose remake/follow-up to the original, it is not without its own cult following. Others find it to be the dark humor of the sequel run amok, with baffling subplots and dramatic departures or suggestions for Leatherface.

The first one in the franchise I actually saw, I’m firmly in that cult following. The moments of extreme departure from the first are met with some of the best continuations of the film’s most iconic visuals and themes. Despite a name change, this is still the best elements of the original film’s family with the worst parts about 90s sitcoms and 90s comedy. I think that’s intentional, and it creates something that isn’t scary, but has too much weirdness and mania to dislike.

There’s a lot of style and period energy to like in Leatherface: The Texas Chainsaw Massacre III. This is particularly true in how it sometimes uses the pummeling, disorganized energy of the previous two installments to its own end. New Line Cinema, picking up the rights to the series for this one, was seemingly determined to create another Freddy Krueger for the box office.

I don’t know if that’s actually true, but I can’t get out of the idea that this movie suffered from never quite realizing itself. It helps to have Ken Foree, Kate Hodge, and a young Viggo Mortensen rounding things with some fun fight scenes and memorable performances.

It just doesn’t amount to something that feels like a single, terrifying force of nature, which I think is an important part of the foundation of these films. Its uneven tone is more maddening than my enjoyment of the movie’s most creative moments.

This is the point in the list where it gets a little harder to find positive things to say.

Texas 3D isn’t a complete waste. It just can’t justify being a direct sequel to the first film, retconning the series from that point forward. Nor does it seem to possess any idea of how to be more than just a series of changes to what we understood about the original.

These are bold ideas. So is flash-forwarding from the 70s to 2013, introducing Leatherface as an old man, and attempting to create new definitions of family within a series of movies that have to explore it to one degree or another. These are really neat ideas.

In a better movie, with better-written characters, better uses of violence, a better balancing of these ideas, and better performances, Texas 3D could have pulled off the rare feat of being a late-in-the-run entry with some serious teeth. Cameos from legends like Bill Moseley, Marilyn Burns, Gunnar Hansen, and John Dugan offer something, but it’s not enough.

The first film to be produced by Michael Bay’s Platinum Dunes company, the shocking financial success of 2003’s The Texas Chainsaw Massacre set off a glut of horror remakes. For that alone, the movie still leaves a bad taste in the mouths of some fans. For others, it takes the core themes and moments of the original, and spins them in clever directions.

I hated the movie, when I saw it in 2003. I thought Jessica Biel, a good actress, was a poor choice a character who became more of a heroine than someone just trying to survive utter, cannibalistic madness. I thought Andrew Bryniarski’s Leatherface was mediocre. Things I did enjoy, R. Lee Ermey, the score, and movie’s rare moments of genuine shock, were not enough for me to like the full film.

Watching it again to write this column, my feelings surprised me by staying about the same. As what’s basically a theme park ride, I appreciate this more than I did the first time. As a horror movie with anything interesting to say, it is depressingly hollow.

The last (for now) installment is also the worst by several thousand lightyears. It might be one of the worst horror movies of the 2010s.

Going further back than any chapter to date, Leatherface is not hurting for an interesting premise. A prequel which explores Leatherface’s childhood and on is inevitable, especially when we’re up to movie #8. That doesn’t mean the movie can’t find a way to do something worthwhile. This is another example of a framework that has to fight an uphill battle to even explain why we should be interested. Stories like these at least run the risk of deviating too far from the material.

Leatherface does that more than I thought possible. Lili Taylor as the family matriarch is completely wasted in a movie that never gets to the part that feels like anything even remotely related to The Texas Chainsaw Massacre. We won’t want a prequel seeped in it, but prequels have to find a way to make too many different groups of viewers happy.

On its own, with no connection to this series, it would be a curious hybrid of slasher and serial killer road stories. As a part of a horror movie run that perhaps has come to an end of good stories to tell, it is a near-complete failure.