id Software's magic touch with the old ultra-violence isn't quite enough to completely save Rage 2 from the rest of its sloppy and seemingly rushed trimmings. 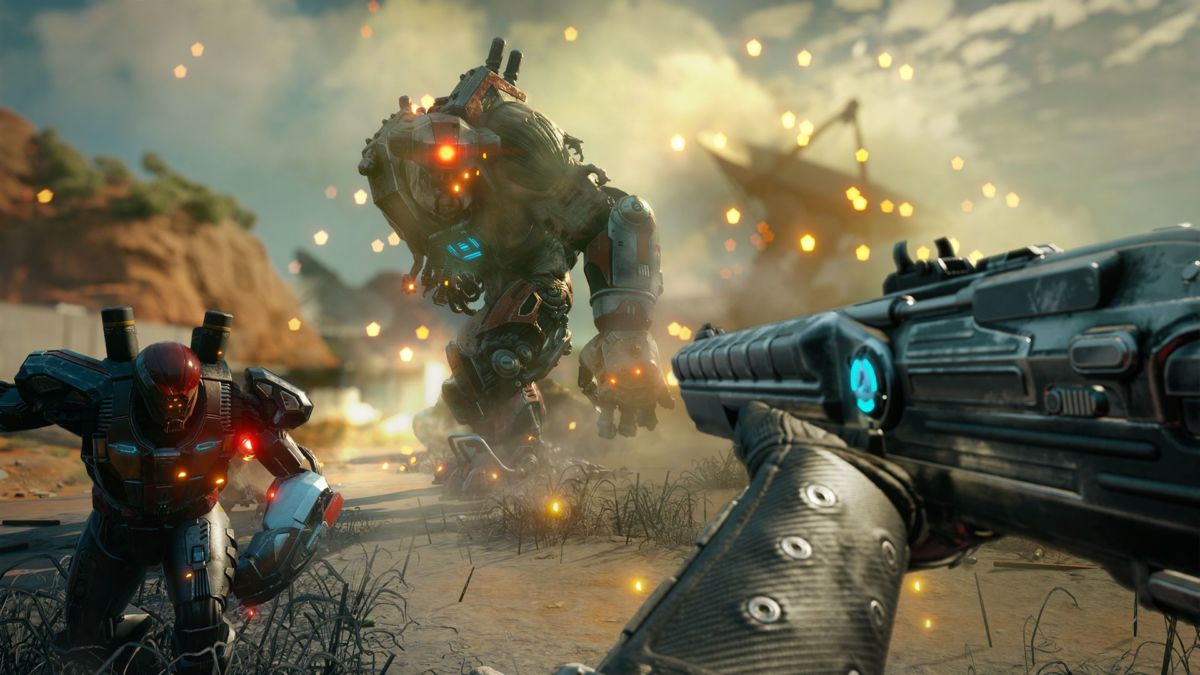 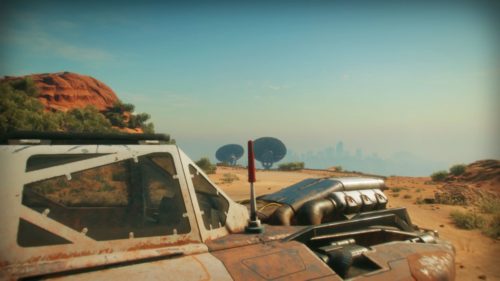 This year has not struggled to deliver what I like to call “popcorn” games, those that you can just pick up and play and lose yourself in for a few guilt-free hours, kind of like going to the cinema and seeing what new CGI thing is battering another CGI thing. You know that you enjoyed it while it was going on, but they are more like palate cleansers than something you will remember for long after. I’ve already experienced this twice this year with the likes of Far Cry New Dawn and World War Z, and Rage 2 fits a very similar bill. While I enjoyed making bandit heads pop and sending mutant bodies flying over and over, there’s little else here to consider with such fondness.

A sequel to the ambitious but flawed open world FPS from 2010, you’d be fair to assume that not many were clamouring for Rage 2 to be released before it was announced. While it certainly tried to do a lot of things, this ambition came at the cost of nothing excelling in particular and leaving Rage feeling a little jumbled and unsure of itself as a result — it also didn’t have an ending, but let’s not open those wounds. With Rage 2, the combat shines so brightly that it almost compensates for how humdrum the rest of it is. 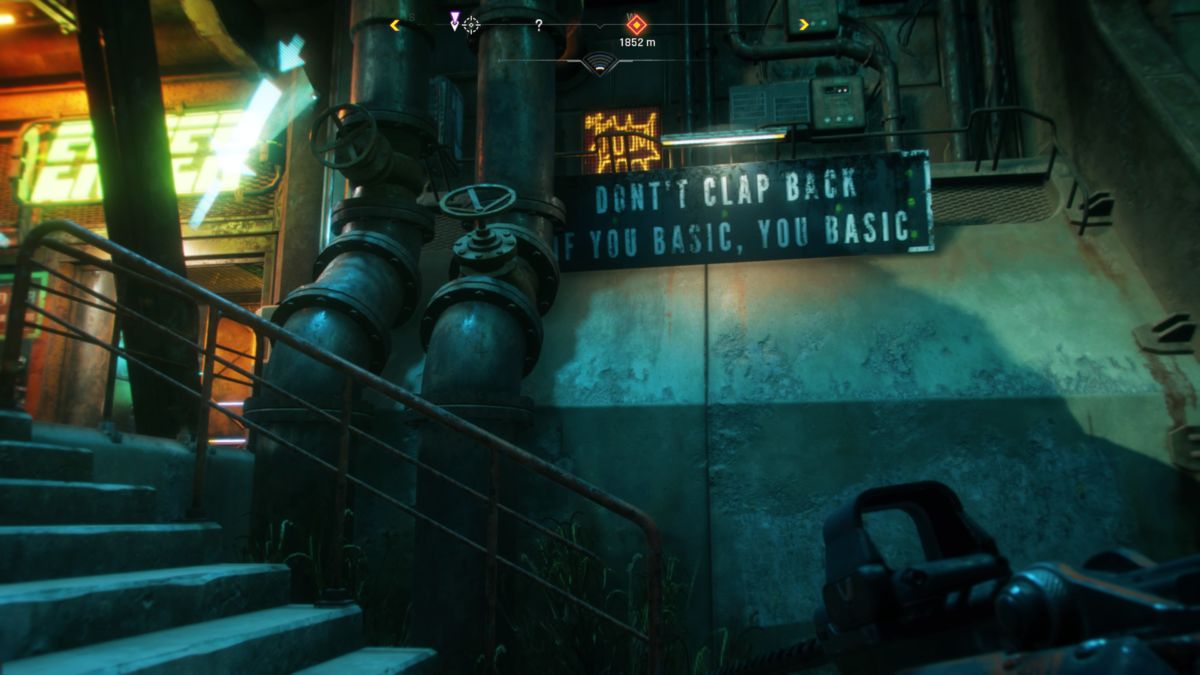 You play as either a female or male character called Walker, who is fully voiced and also full of themselves — but in a charming way. Following The Authority’s reappearance in the post-apocalyptic wasteland, your home is destroyed and the person who helped to raise you suffers the wrath of General Cross, who basically looks like a ‘roided up version of Vader in Return of the Jedi. With a new Ranger suit at your disposal, you must team up with some familiar faces to take on this new threat.

And that’s about all there is to the story in Rage 2. There are few characters worth mentioning, no exposition or character building granted beyond the first ten minutes, and not much reason to care. If you couldn’t tell by Rage 2’s irreverent marketing campaign, it’s not trying to be The Last of Us, but there has to be something to latch on to. The main hook of Rage 2 is not saving the day or discovering that the real treasure was the friends we made along the way, but making yourself feel more and more like a superhero with a very loose ethical code instead. 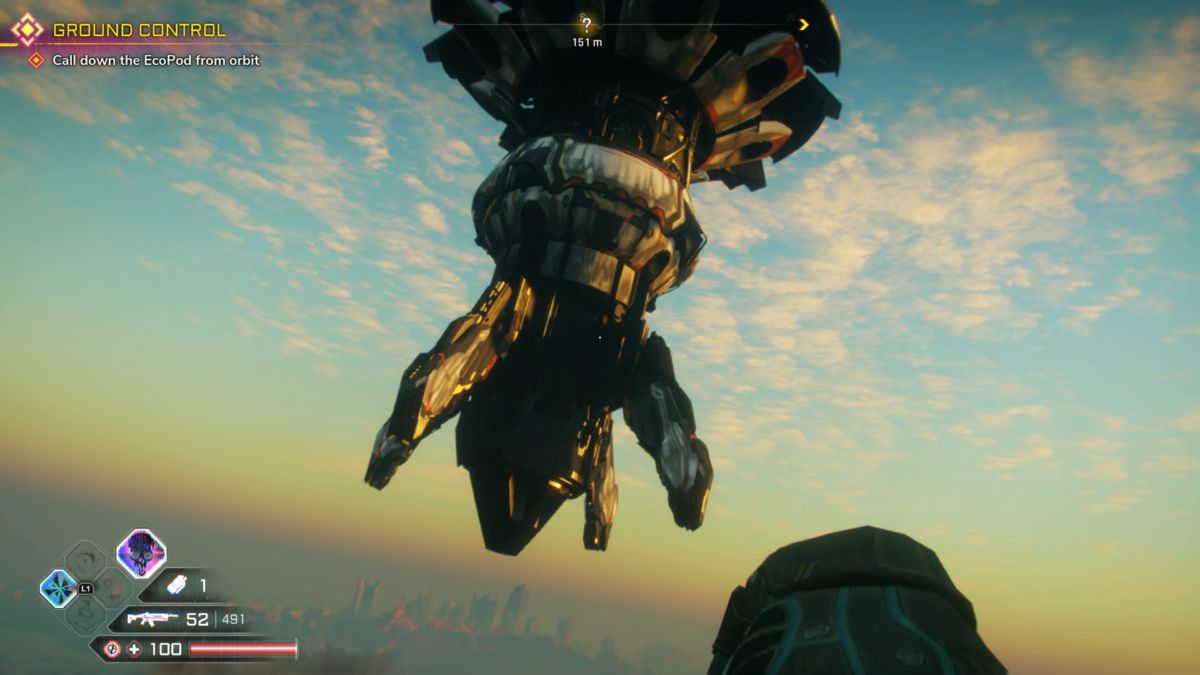 The Ranger suit is the real MVP of Rage 2, allowing you to jump super high, dash out of the way of rockets, and throw miniature black holes at your varied enemies. While the overwhelming majority of Rage 2 is just shooting people with slight variations, the appeal of doing so doesn’t dissipate too greatly as it’s just another excuse to dip into your toybox and kill creatively. It helps that gunplay is supremely meaty, tight, and responsive, even with a controller — something that id also accomplished with 2016’s DOOM. Making all the things go dead is clearly where id Software feel most comfortable: Rage 2 constantly makes you feel like a hopped-up Doomguy with an aversion to mohawks. A good sign for DOOM Eternal later in the year, for sure.

That hopeful thinking extends the inspired way in which you utilise weapons in Rage 2. As well as offering few long-range weapons to tell the player to get up close and personal instead, id make secondary fire as simple as aiming down sights for many of the game’s weapons, meaning that greater experimentation is always readily accessible. I was deeply fond of Rage 2’s shotgun, which would explode skulls in hipfire and thrust enemies over railings with its concussive ADS. If it’s joyfully slaughter you want, Rage 2 once again proves that id are the masters. 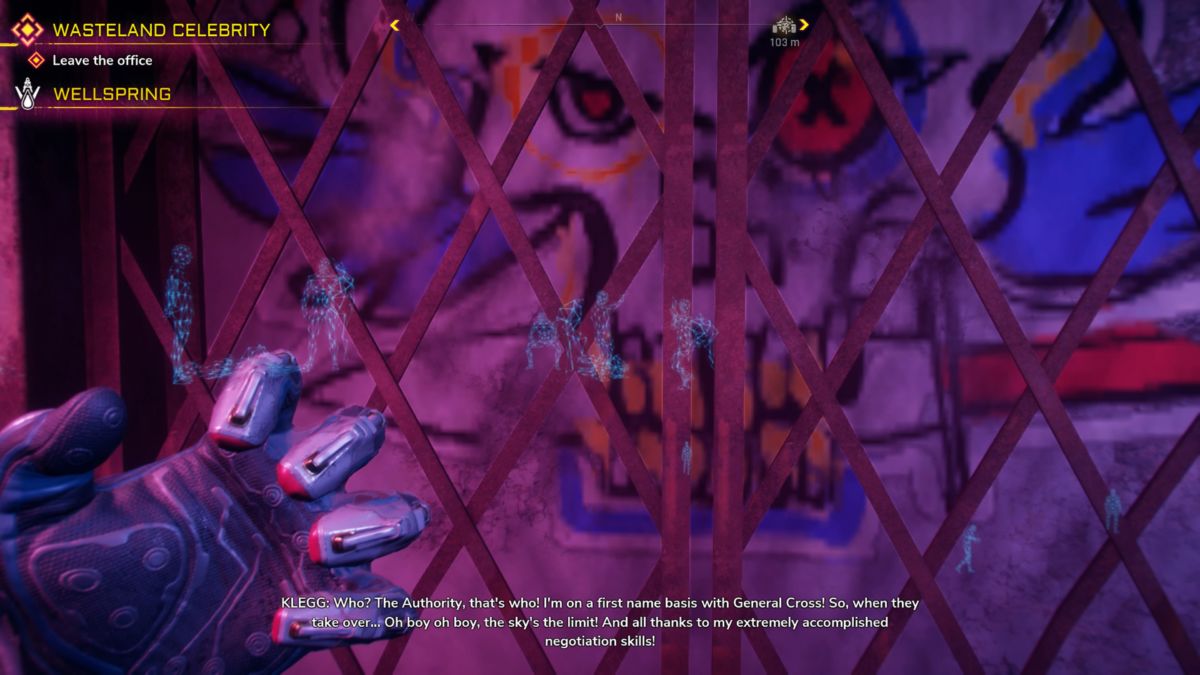 However, it’s in pretty much every other department, which you feel were the responsibility of Avalanche, where Rage 2 falls flat — I don’t think I’ve ever come across an open world this beige or uninviting, especially with how underwhelming and unresponsive driving feels to actually explore it. The wasteland aptly feels like a waste as there is so much empty space with a hollow and engaging atmosphere pervading throughout it. I can’t quite but my finger on why Rage 2’s map feels uninteresting and also oddly unwelcoming, but it doesn’t help that fast travel is so sparsely incorporated and the travel distances between missions are often so vast.

Rage 2 has cosmetic microtransactions for weapon skins in the form of Rage–sorry, RAGE coins, but considering how pointless this is in a single-player game and that the game cannot “sell” them to you in-game unless you connect your Bethesda account, they can easily be overlooked. Truthfully, I didn’t even know they were included despite having played the game for 20 hours. 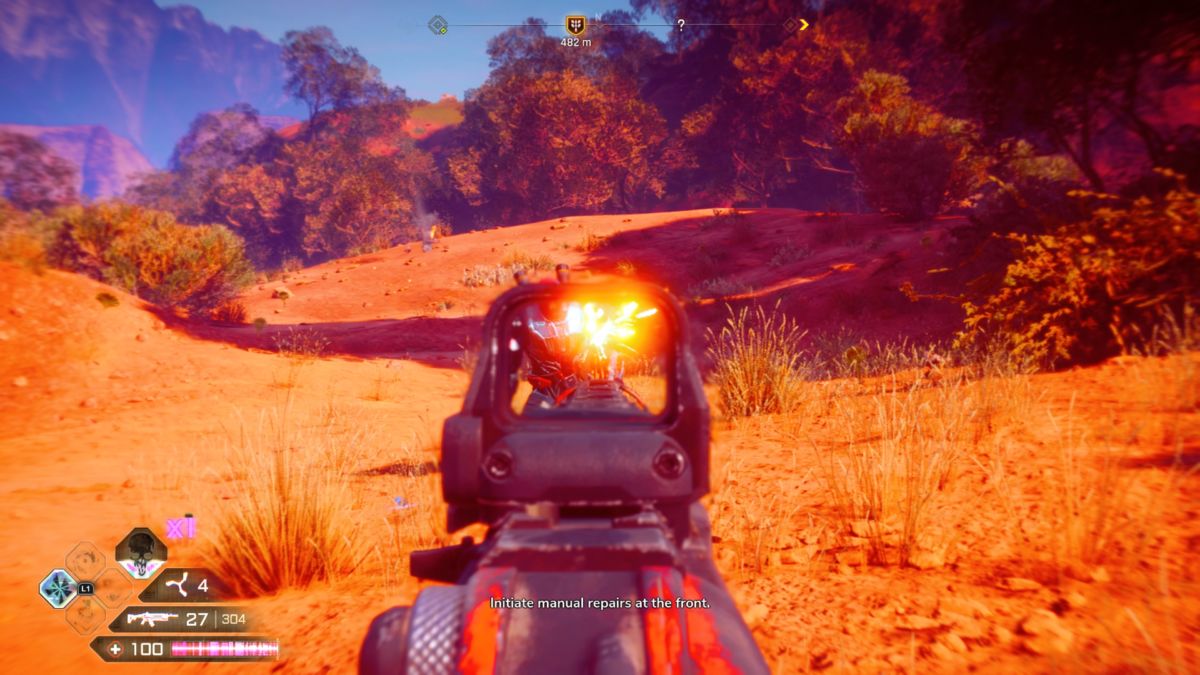 If you do want to tick some things off the list, your reward is more points to put towards upgrades to make you feel even more superpowered. After spending a total of twenty hours in Rage 2 on normal difficulty, I felt little reason to soup myself up much beyond the tenth hour as it became a bit of a cakewalk. Perhaps there’s more of a necessity to level up on harder difficulties (and you may actually be best served starting off on hard), but as I could levitate while firing rockets and then separate my enemies’ souls from their bodies, I didn’t think the busywork was necessary.

That being said, there is a great sense of progression to be enjoyed in Rage 2, your Walker going from just some hapless person in a suit to something out of the latter Saints Row games; a franchise I feel Rage 2 shares some DNA and attitudes with. Finding new Arks to unlock new weapons and powers is the one bit of checklist-ticking you probably won’t mind so much. You can then level these up by completing “projects” for your closest associates, who will give you access to different upgrades and abilities based on their specialisation. While a lot of these upgrades seem like padding for the sake of padding, those who want to feel like a radioactive Saiyan will probably revel in the variety here. 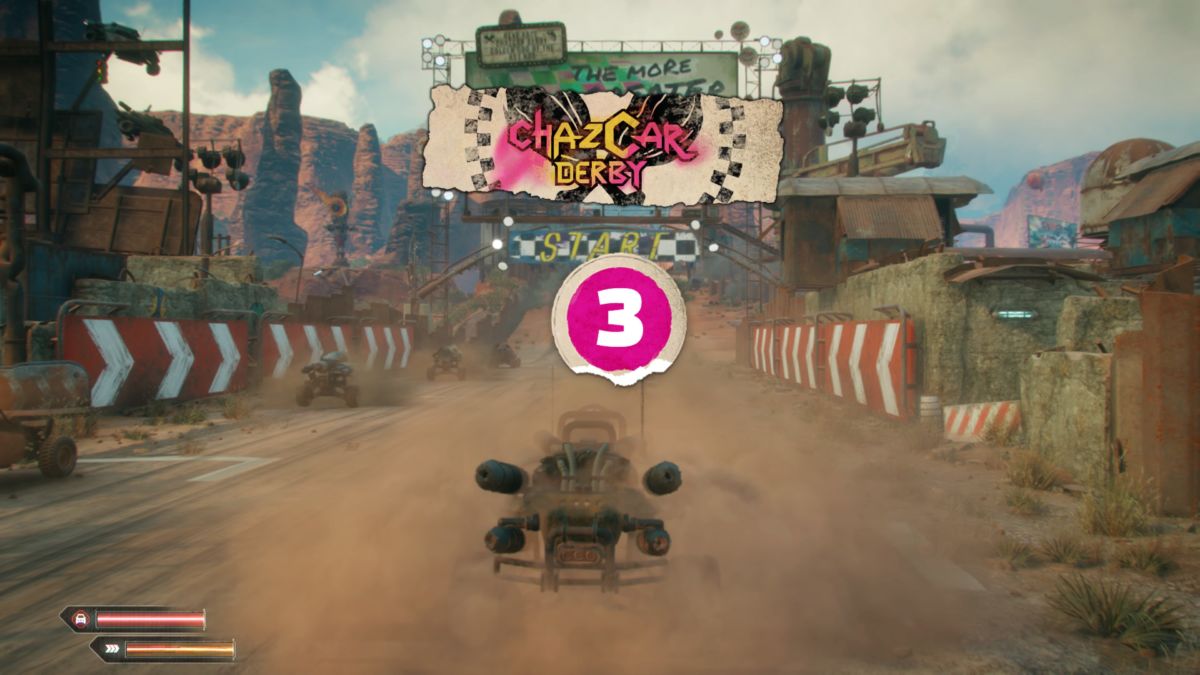 You may baulk at me “only” spending twenty hours with Rage 2, but that’s the strange thing: Despite it being an open world game with RPG elements, I dusted off its story with time to spare. The narrative is so direct and has few of the diversions you expect from a game of its ilk, and while it’s admittedly refreshing to play something that doesn’t throw a spanner in its narrative cogs to keep the thing ticking over for a few extra hours, its end doesn’t feel like it’s coming at all — I was expecting some “gotcha” moment during the credits that never arrived. It’s hard to shake the feeling that Rage 2 was intended to be much grander before being scaled back or course corrected.

Rage 2 also might have benefited from one last round of QA before release. Bugs are to be expected in open world games as there are too many spinning plates for something not to drop, but they are typically bugs of a graphical nature more than anything else. With Rage 2, however, I came across a bug so bad that I almost had to start a new game, and all because I had gone through the door right next to the door it wanted me to. The events of the mission would trigger, but the objective would not update and certain characters would not appear in cutscenes. As the exit only opens again after you have completed the mission, I was stuck in a massive facility with no way out having unofficially already completed the mission; my autosaves were all for spots where backtracking wasn’t possible. It was beyond lucky that I had randomly manually saved an hour before, or else I would have been stuck in that facility forever.

What you get with Rage 2 is a 50/50 experience, one that’s half an amazing FPS and half an insipid open world that barely even tries to make itself interesting. As superb as the former is, the latter — along with a poor and brief story, repetitive missions, and performance issues — is so underwhelming that you could be forgiven for just wanting to take a trip to Hell instead.

Verdict
id Software's magic touch with the old ultra-violence isn't quite enough to completely save Rage 2 from the rest of its sloppy and seemingly rushed trimmings, but if you want to play as a superhero who isn't fussy about killing, you're well set here.
6.5
Cultured Vultures is a pop culture website established in 2013 covering all things gaming, movies, and more. We eat your words.
All The News On The Biggest Games