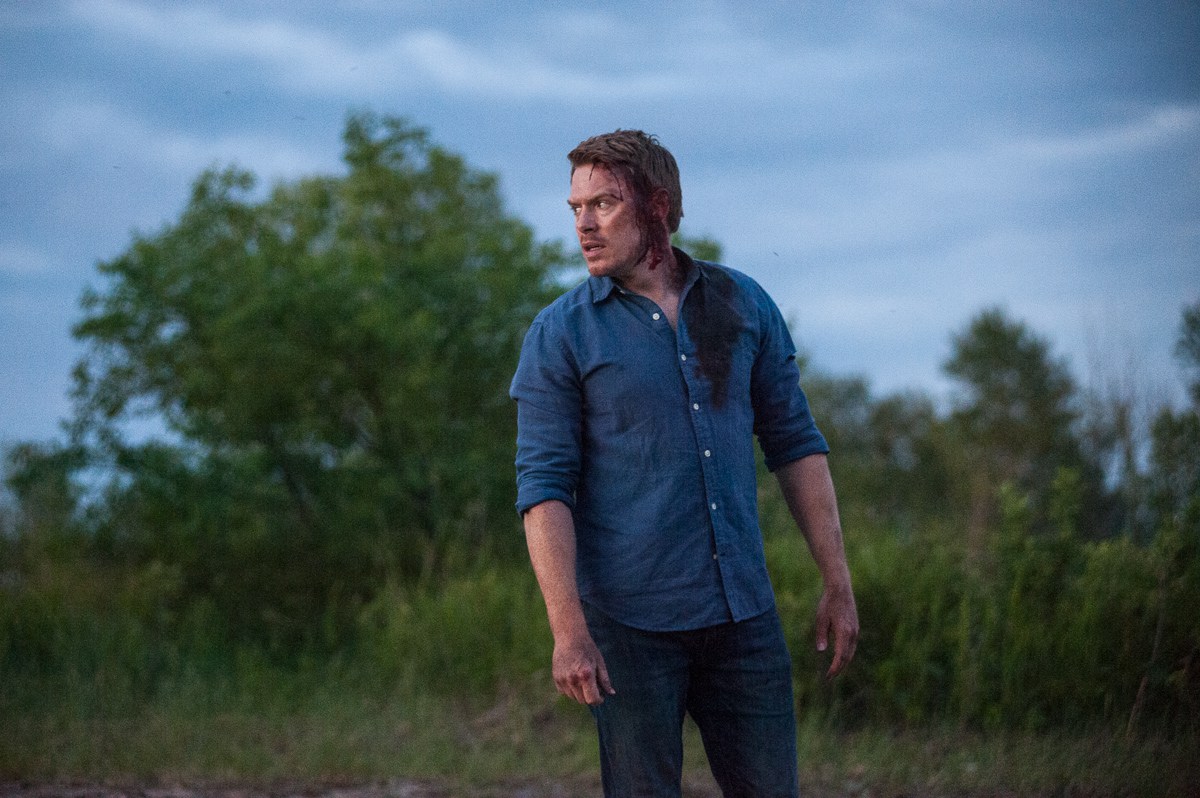 Written and directed by Caroline Labrèche and Steeve Léonard, Radius is a thriller with a gimmick that could easily have fallen apart in the wrong hands. Luckily, the directors and their cast know their stuff and deliver on a fun almost-thriller with a neat hook.

Radius has plenty of dramatic tension and a mystery that doesn’t get solved until the last act, so definitely points for that. The solution to the mystery is a little disappointing, but Labrèche and Léonard certainly gave it their best shot. The explanation for the film’s gimmick is somehow both more over-the-top and mundane than you’d expect.

And what is the gimmick? Well, Liam (Diego Klattenhoff) has a bit of a problem. Seems that whenever people get too close to him, within a few feet, their eyes turn white and they plop to the ground, dead. Gone. No longer a part of the universe. So that’s a problem. But when he’s around Jane (Charlotte Sullivan), again within a few feet, the effects are neutralized and he doesn’t kill people. So this is good, especially since they’re good-looking, fairly young, and clearly attracted to each other.

And of course Liam and Jane have amnesia, which furthers the mystery. It’s a weird plot device, but as you get further into the movie, you realize that it’s the only way Labrèche and Léonard could have made the thing work. And of course their memories come back to them piecemeal, more and more as the movie progresses, until all the mysteries are revealed. You can take your best guess as to what’s really happening, but it’s likely to be wrong. That’s how bonkers the final revelation is.

The payoff might leave people scratching their heads. The way Liam gets his powers is just plain weird, and the reason he and Jane are together seems forced. But it’s enough for me that there’s both a mystery and a hint of subtlety about the thing. This is a concept that simply would not have worked if the execution had been more over the top. The climax might feel a little flat, but it’s a fun journey getting to it. Theoretically, there’s a lot of ways this concept might not have worked. But it does. Part of the reason it works is the subtlety, but the movie also follows its own strange internal logic. It sets up its weird premise and follows the thing through to the end. I like that. I admire that.

And, you know, it’s really hard to picture the movie working without believable performances by Klattenhoff and Sullivan. They resist the temptation to slip into melodrama. Their restrained performances leave enough room for the kind of suspension of disbelief that you’ll need to really lose yourself in the flick. Klattenhoff virtually dares us to not sympathize with Liam’s situation. Also, besides Brett Donahue, who plays a pivotal role in the second act, they’re the only main characters. Everyone else is peripheral.

The movie’s visuals are okay. Nothing too spectacular. Pragmatic with a few flourishes, like when Jane is talking to Liam and her reflection in the refrigerator is distorted, illustrating the frayed sense of self caused by the amnesia. And that’s where Radius really succeeds. The drama of the thing isn’t the gimmick, but the psychological battles it causes the protagonists.

The movie isn’t horror, isn’t really science fiction, isn’t really a thriller (though this is probably the genre it’s closest to). But Caroline Labrèche and Steeve Léonard don’t seem to worry about all that. They’re brave enough to carve out their own genre. I think that’s wonderful that the film does its own thing, without apology, and somehow it mostly works.

Radius will be released on video and on-demand on November 10th.