With PUBG finally on PS4, can it stand on its own as the original - and best - battle royale contender? 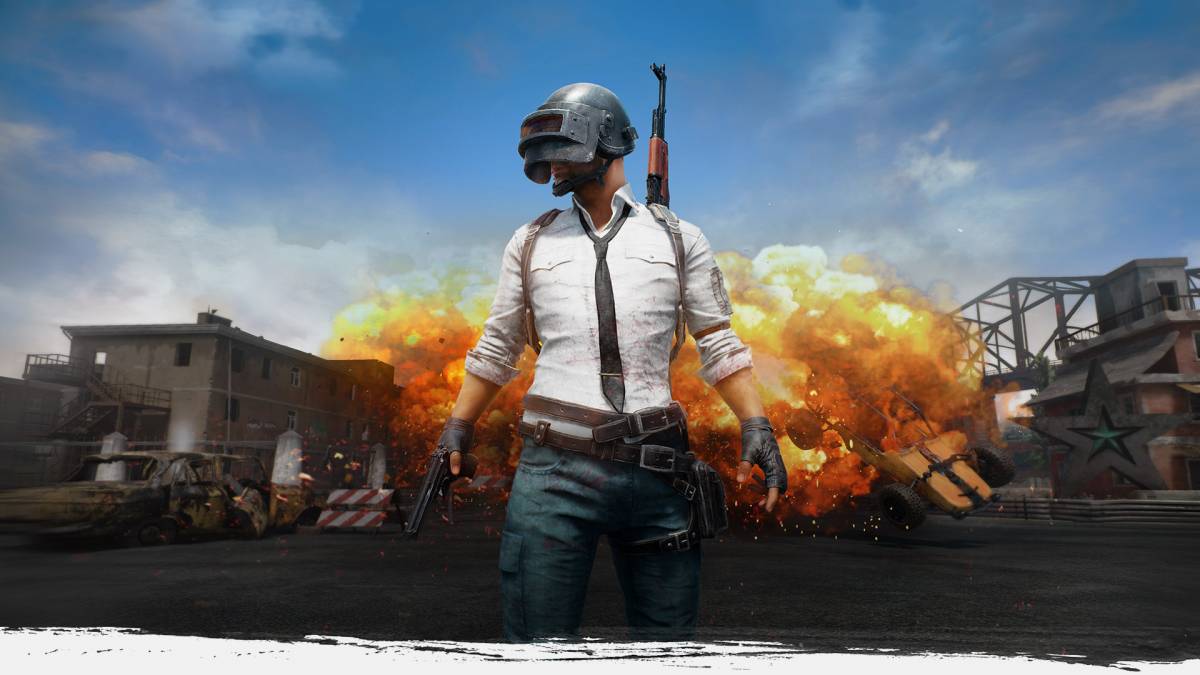 2018 has been an amazing year for battle royale fans. That’s largely due to the ridiculous explosion in popularity of Fortnite, but it’s a genre that’s dominated headlines, knock-off releases, and even the AAA gaming sphere, with Call of Duty’s recent Blackout mode. And with an upcoming presence in Battlefield V and even a featured mode in the recent Red Dead Online, this last-man-standing style of multiplayer mayhem is set to stay.

But for many, the “where we dropping?” mantra began with PlayerUnknown, and his iconic mod that developed into one of the highest selling games of all time. Releasing initially on Steam’s early access last March, the title is now a staple in the multiplayer landscape. One-hundred players parachute onto a vast landscape, collect items, and fight to remain the last alive – earning themselves a ‘chicken dinner’ in the process. It seems like standard knowledge now, but rewind even a few years, and this style of Hunger Games-esque combat would be reserved for only Minecraft servers and dreadful early access projects, doomed to never reach completion. 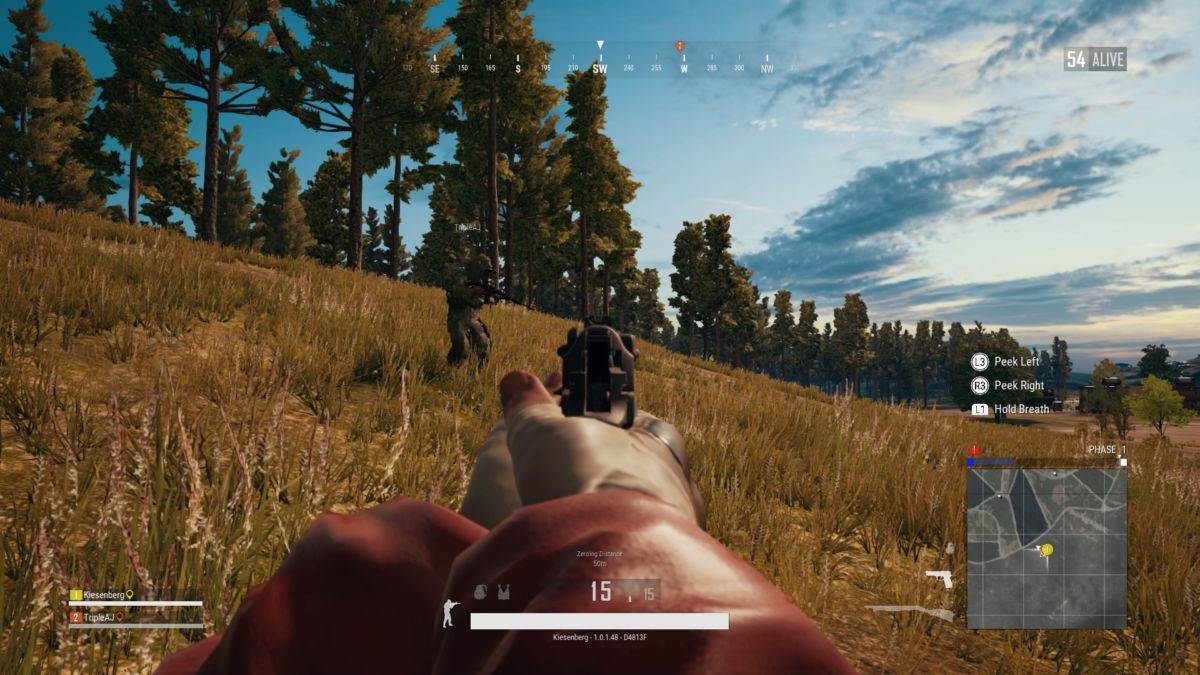 So now, just over 18 months since its initial release, PlayerUnknown’s Battlegrounds (PUBG) has arrived on the PS4 – my console of choice, and the machine I’ve played hundreds of hours of Fortnite on. I won’t rant about Epic’s alternative battle royale throughout this, but it’s important to mention, because I went in to PUBG with a set of expectations and experiences gained from that other multiplayer behemoth. Were those expectations met? Were those experiences matched? It’s a mixed bag.

First of all, let’s get this right out of the way: PUBG on PS4 looks like dirt. Regardless of whether you’re on the iconic Erangel military base, or the more recent tropical island map, Sanhok, everything looks unappealing and grainy. That’s just how it is. That’s not to say that performance is always awful – it varies – but from a purely aesthetic stance, PUBG is an ugly game. Guns lack the detailing you’d expect in first-person, surfaces have basic textures, and looking across a vast landscape is as impressive as staring at a muddy puddle in the dirt.

However, this isn’t as crippling to the experience as you’d expect. Frankly, when I’m in the middle of an intense gunfight, ducking behind cover and calling out to my teammate to circle around and flank whoever has us pinned with a high-powered rifle, I couldn’t care less what the wall I’m hiding behind looks like. Similar to how any phenomenal-looking game will look standard after a few hours of play, PUBG’s muddy visuals slip away once you become immersed in its excellent tactical action. 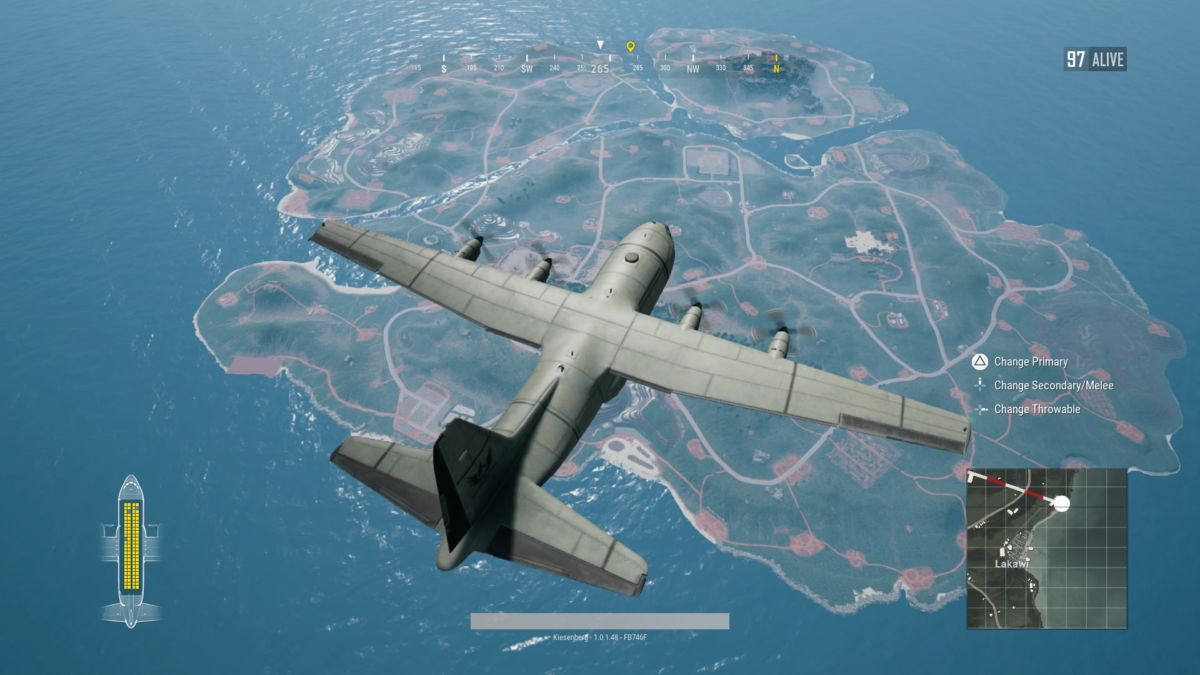 Because at the right time, with the right people, PUBG is an excellent multiplayer experience. Even Fortnite lacks the heart-pounding, adrenaline-fuelling rush of climbing an abandoned office block staircase, waiting for an enemy to pop out with a shotgun at any moment. Or the frantic suppressing fire you’ll dole out while hiding behind a sandy boulder, as dirt flies up around you as a result of a faraway sniper keeping you pinned. When it works it really works, and the combat difference between this and Fortnite is profound. Gone are the colourful numbers when you land a hit, replaced by visceral blood and panic.

Some aspects will be familiar to Fortnite converts, though, like the rapid, decimating storm that will catch up to anybody not paying close enough attention. Whereas Epic have largely negated the storm as a threat through many traversal means, PUBG’s blue wall of death is still very dangerous. It moves deceptively slow at first, but ignoring it means running for minutes at a time in a bid to escape, only to be consumed and watch your health bar gradually tick down every second. At later stages of a match, stepping beyond this blue boundary for only a few seconds will result in death, so your attention is definitely needed. 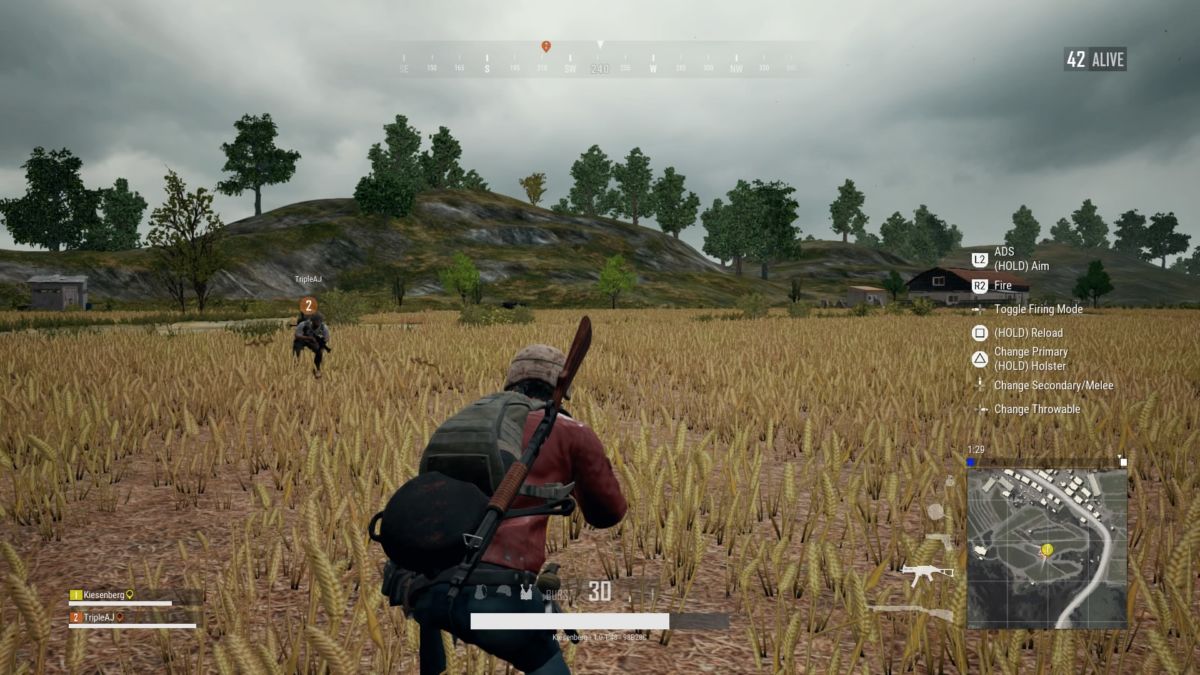 Health management is also familiar but arguably more in-depth, with items like medkits and bandages used to patch your wounds. Painkillers help to push your dwindling health over the 75% threshold that typical healing peaks at, and all of these can be activated by simply pressing down on the D-pad. There are other hotkeys allocated to the controller, such as pressing right to select grenades and left to change your firing mode, and learning all of these will make you a more efficient killer.

Combat is satisfyingly weighty for the most part, with shotguns echoing across the hills and SMGs spitting out bullets as fast as you’d like. The aforementioned firing modes (single, burst, or full-auto) are useful for controlling recoil, but learning to tap the R2 button to fire, instead of holding it in blind rage, is often a safer bet. Just make sure to switch modes as soon as you get a weapon, because everything begins on single-fire – something I learned the hard way when face-to-face with a shotgun-wielding foe. 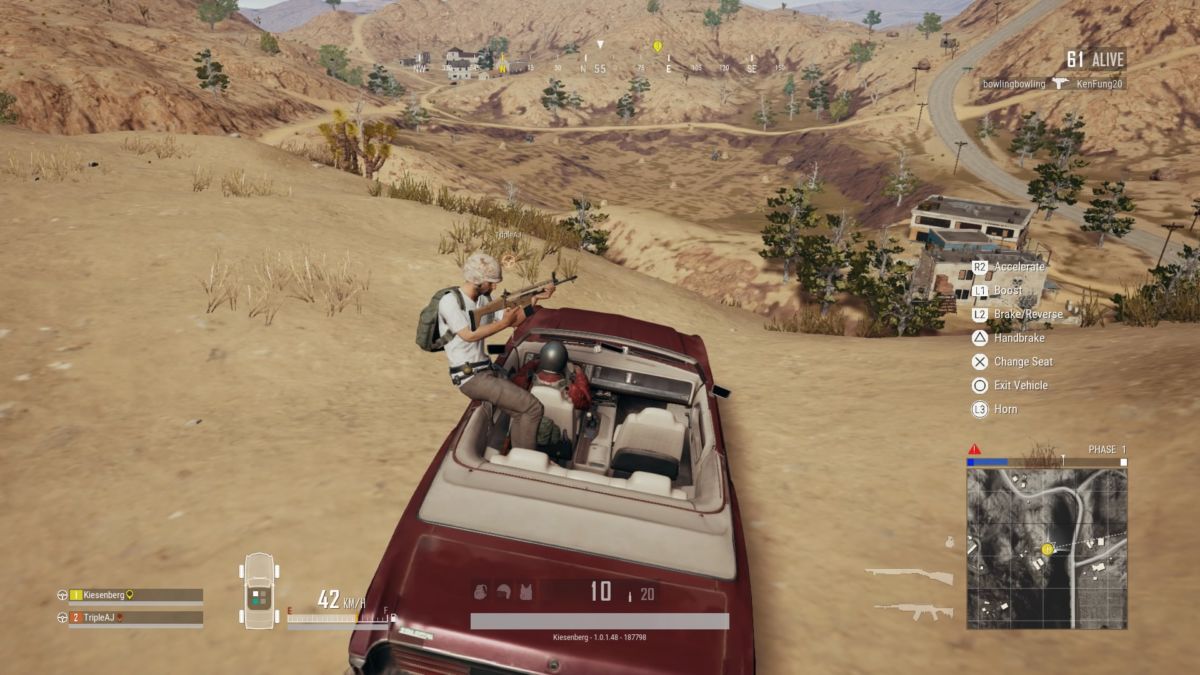 If you manage to outwit and outgun your opponent, you’ll then encounter PUBG’s PS4 inventory, which is, at first, obtuse at the very best. Essentially split into five columns that are navigated by pressing L1 and R1, you’ll need to work out what goes where and how to equip weapons, attachments, equipment, and anything else that’ll give you an advantage. Square collects items while triangle drops them, but you’ll need a rucksack in order to carry plenty of ammo to keep your guns firing. Weapon statistics are shown when hovering over your desired gun or frying pan, but these seemingly can’t be compared, so it’s tough to know whether the pistol you’re picking up is more worthwhile than the sniper rifle you just dropped. This means that trial-and-error is your best bet for figuring out what works, but it’s an initially unfriendly experience that feels more distracting than it ought to.

Once everything clicks, though, then your choices seem to open up immeasurably. Swapping from a holographic sight to a x8 scope mid-gunfight is hugely satisfying, and having the option to create such a bespoke arsenal is something I wasn’t expecting – having come from a much more cartoonish style of gameplay. There are still teething problems that are worked out through experience (like how you’ll want ‘Control Type B’ to accurately zoom in and out when aiming), but these feel minimal to the amount of fun that can be had with friends. 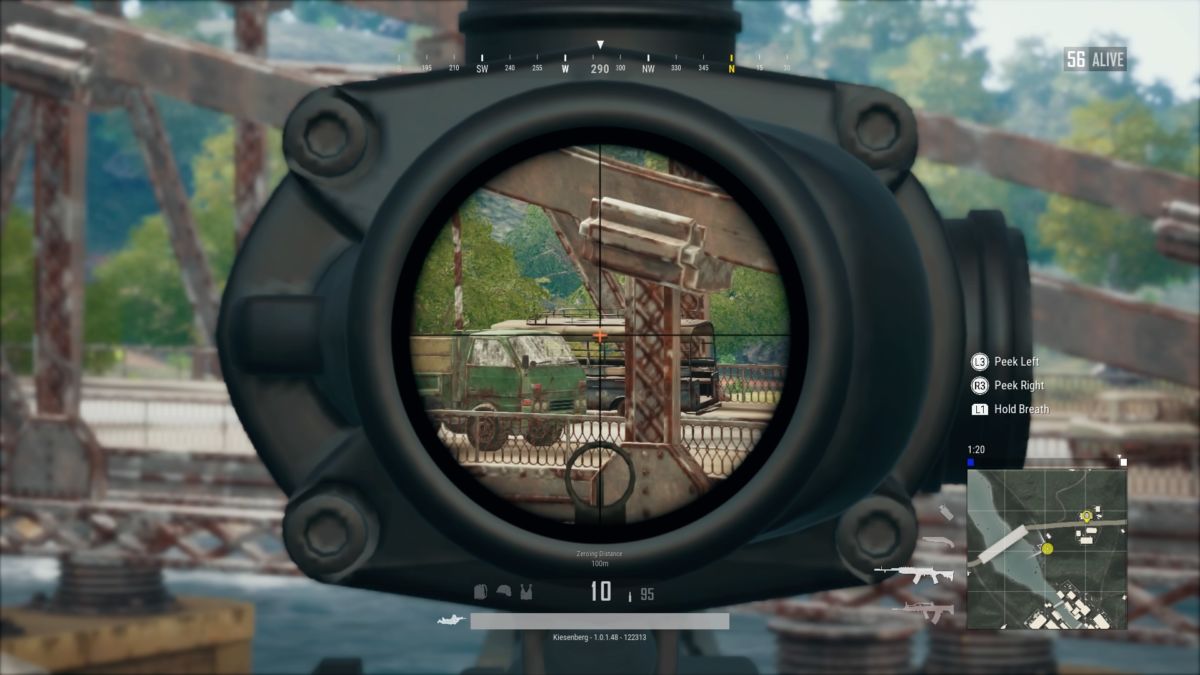 And it’s that companionship that elevates PUBG from a standard game to a uniquely enjoyable one. I initially played a fair amount of solos, and found myself frustrated by the punishing time-to-kill and tricky menus. Dying immediately and having to drop in all over again was annoying, and the silent isolation created by PUBG’s nonexistent soundtrack makes for a lonely trek across these huge maps. But once a friend joined, and we learned how to not be so awful together, everything clicked much better. Reviving each other and clearing houses as a team felt much more satisfying. Learning which guns worked and which we hated was fulfilling, and driving across the desert in a flashy, out-of-place lowrider was much more enjoyable as a squad than going it alone. Perhaps this is just personal preference, but for a game as large as PUBG, cooperative gameplay seems a much better introduction.

Regardless of whether you’re with friends or alone, there are still a handful of technical issues that plague what is otherwise a surprisingly functional game. Audio cuts in and out seemingly at random; particularly the plane that drops everybody at the start of the match. Textures and objects do pop-in, but not to the horrific degree that the Xbox One version suffered upon release. The frame-rate is generally sufficient, but struggles hugely when driving through a busy city, populated by many tall buildings. In isolation these are all negligible, but taken together they can impact the enjoyment of frantic gameplay. Still, compared with what people expected from PUBG on PS4 (and it’s a standard, base PS4 I’m playing on), everything works perfectly.

It’s worth mentioning that microtransactions are present in PUBG on PS4, but they seem fair and don’t lock out anything that, for the most part, can’t be obtained through normal gameplay. Battle Points (or BP) are gained through gameplay, and you’ll earn more based on where you finished and how many kills you racked up. This beats other battle royale titles, in which anything below first place might as well be a loss. BP will allow you to purchase loot boxes that grant a random reward, so you can customise your nameless hero to your heart’s content.

Then there’s G-Coin, which is the premium currency that allows you to directly purchase specific weapon skins and items. All of this is aesthetic, and it was inevitable that such a popular title would bank on players wanting that specific skin. It’s not obnoxious, though, and the choice to earn BP and crates feels fair and balanced. Roughly 3 average games will net you enough to buy a crate, and completing the daily or weekly challenges will speed that up exponentially.

At the end of the day, you already know if you’re interested in picking this up. The battle royale craze has enthralled plenty of gamers and infuriated just as many, and it’s unlikely that PUBG now being on PS4 will drastically change your opinion. However, it is a surprising experience. Especially once you get over the initial difficulty hump presented by the game’s controls and menus, there’s a genuinely great game here that’s the perfect anecdote-maker for groups of friends. Basically, if you like the idea of battle royale but don’t favour the colourful aesthetic of Fortnite, then this is well worth your time. Just forgive its hideous face because, really, it’s inside what counts.

Verdict
While slightly late on arrival, PUBG on PS4 provides an excellent battle royale experience marred by some ugly visuals and technical issues, but look beyond its grainy exterior and there's something special here.
7.5