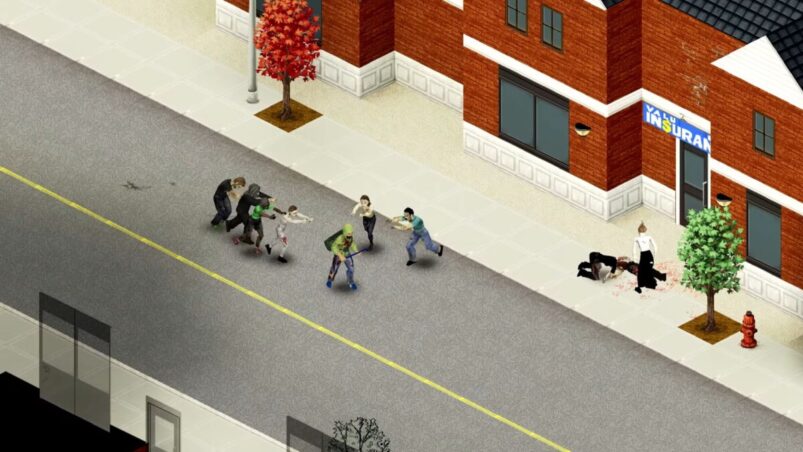 It’s finally October, and winter is here. Rain pours incessantly, giving continued life to the vines that have started to creep up my house, like nature is reclaiming it, almost cocooning me inside. Everything creaks in the quiet moments, the groans piercing the night as something distant breaks. The graves are the only still thing here. Though this has been my life for the past few months since the world collapsed, it doesn’t get any easier. Just colder. The days are long, but I’m still grateful to have them.

I keep eating my can of dog food.

This is Project Zomboid, The Indie Stone’s ongoing magnum opus that feels like every bit of zombie media condensed into one all-enveloping video game. The only thing it’s missing is a pilot shuffling out of an elevator and maybe a phone call to Aunt Alicia. While zombies are all about brains (well, depending on which flavour of 80s zombie media you enjoy the most), it does feel like someone cut my brain open, took a little look inside, and made a zombie game that I’ve been wanting to play my whole life.

All I’ve done for the past week is stumble around inside the lo-fi, high-stress world of the collapsing Knox County and try not to get myself killed — and not often succeeding. While I’d previously dropped a few hours into The Indie Stone’s misery simulator, it only really connected with me once I got my hands on a Steam Deck and could bash skulls and push down the anxiety anytime, anywhere. Even after I’d burnt down my house and about 25 hours of progress with it thanks to a single frozen shrimp left in the oven for too long, I saw it as an opportunity to try some other style of suffering instead.

It’s really difficult to start talking about Project Zomboid without reeling off neat feature after neat feature, small details that make a huge difference in pulling you in and not letting go. The level of detail here is almost staggering. From the fact that you can break down stairs to stop zombies from shuffling after you to the fact that the world degrades as civilizations continues to crumble, Project Zomboid never stops surprising. It honestly feels like The Indie Stone have been listening to people fantasising about the zombie apocalypse for years and how they’d survive and have worked diligently to make their role-playing dreams a digital reality.

You could, for instance, try to simply survive in the city, whittling away at the zombie hordes and loading up on canned food as you go. Or maybe you’d like a quieter life on a farm, you able to grow strawberries and cabbages as the world burns. Or you could always team up with a group of friends and build up a community that eventually goes mad and becomes a cult for Spiffo, the game’s raccoon mascot. These are all possible thanks to just how many tools you have at your disposal to role-play, whether that’s from the suite of in-game options available to you before the sufferings begins or the game’s quite staggering array of mods.

Personally, I’ve been enjoying a rather ordinary solo survival experience, me against the undead world and my character’s inherent obesity. It’s a simple life, stealing socks off zombies and chopping down trees to help me build a massive wall of logs, but it’s an honest one. Zomboid lets you pick what kind of character you want to be based on their profession and traits. A veteran is good with firearms, but may also get queasy at the sight of blood thanks to a trait. Meanwhile, a mechanic may be able to repair cars, but they could also become panicked when they go outside. The sheer volume of options given to the player makes Zomboid feel like The Zombie Survival Guide come to life.

The role-playing wouldn’t feel half as impactful without the peril that looms over everything you do, however. Death comes incredibly fast and almost out of nowhere in Zomboid sometimes, with a single bite being enough to add you to the ranks of the zombie horde. One time, I carelessly wandered into a clothes shop and started looting all the socks (as is my right) and didn’t properly scope out the area. I looked away for one second and a zombie had taken a chunk out of my neck. I was done, just like that. There’s no cure in Zomboid, with even a scratch having a chance of offing you. This is what makes Project Zomboid one of the scariest games I’ve ever played, despite the lack of fidelity. All you’ve accomplished can be undone in the blink of an eye. Knowing that everything you do matters leads an incredible amount of tension to proceeding, and sometimes doing nothing can be just as stressful.

Once you do die (and you will die), you’re able to enter the same world as a new character and then kill your old character to put them to rest, but all of your trait upgrades etc. are lost and you have to start over. This is probably my biggest grip with Project Zomboid by far. While this lack of permanence does add significant stakes, the grind in Project Zomboid is absolutely wild, with you having to sit and read books to then get enough an XP boost to then watch TV and videos to upgrade specific traits. You can also earn XP by playing naturally, but it’s so hideously slow with default settings that you could probably get through a lot of One Piece by the time you’ve disassembled enough radios for an Electrical level.

Project Zomboid remains in active development, so there are probably a few dials that can be tweaked to help out the balance, as well as an absolute heap of new content still to come. I can’t wait to see what they add, as it seems like every update just adds on top of what is already the definitive zombie apocalypse role-playing experience. Nobody ever said the end of the world would be fun until The Indie Stone came along and proved otherwise.

READ NEXT: 30 Best Survival Games of All Time