The beta wasn't exactly a brilliant display of the game. 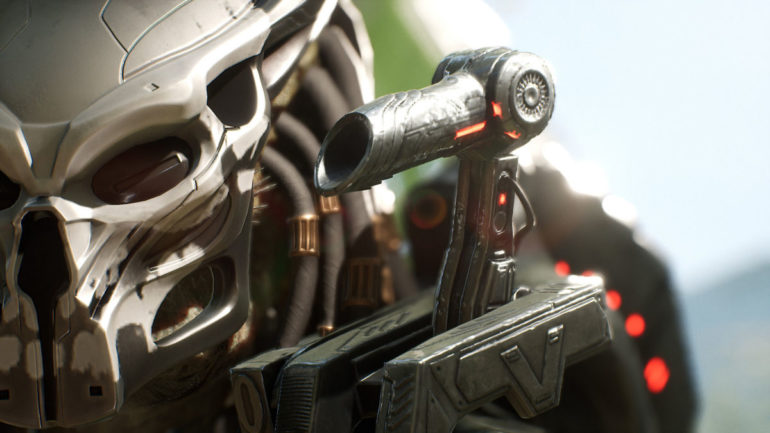 In a similar vein to games like the upcoming Resident Evil: Project Resistance or even Illfonic’s own Friday the 13th: The Game, Hunting Grounds sees you either working together as the Fireteam to complete randomly assigned objectives or as the titular Predator, slaying fools and taking skulls.

As the Fireteam, teamwork and communication is key to victory. This much should be clear but try telling that to the randoms I played with. It’s difficult to be an elite force of soldiers and pay tribute to Arnold Schwarzenegger’s screaming rainforest commando when Alpha soldier has sprinted off, alerting the nearby enemy AI camp that you are there. Suddenly, the alarms are ringing and swarms of the militia are darting about randomly and raining bullets on your muddy parade. It’s all the more frustrating with no clue how to turn the alarm off, knowing that you’ve basically just dropped trou and told ol’ Predator exactly where you are.

This all happened in roughly one minute of my first match.

The objectives for the Fireteam are given at the start of each mission, which usually involves some form of infiltration in an enemy base. These are marked on the map through orange icons you approach and hold ‘square’ on to activate. The main mission that popped up a few times for me was to gather intel from enemy computers by plugging in a very 80’s sized hard drive, before having to retrieve it again after the download had completed. You can also find an in-game currency, Veritanium, around the map. This will give you a bit of XP, as well as the option to upgrade your loadout and weapons.

In your standard arsenal, you’ll have a primary and secondary weapon, along with a throwable weapon (a grenade, in the case of the regular loadout) and a healing item. Your health and stamina are marked in the bottom-left corner of the screen, with stamina being depleted by sprinting. Your primary objective is listed in the top-right corner and a compass that highlights this at the top. You also have a minimap which displays your teammate’s locations, as well as the AI enemies, and your teammate’s health bars on the bottom.

Control-wise, although the button layout is fairly simplistic, I couldn’t help but feel that the Fireteam was pretty clunky to operate. The aiming was pretty sluggish, which, especially when Predator is hopping about the treetops, is a huge difference between life and death (aka the sanctity of your spinal structure). In a bind, with AI constantly running in and firing at you, it sometimes became simpler to just hip-fire and hope for the best as aiming down the sight was nowhere near as snappy as it should be. It was a really big source of frustration that needs to be addressed quickly.

Another gripe with the Fireteam is the odd lack of ability to hop over obstacles. Take Call of Duty: Warzone, as an example. If you approach, say, the window of a house, you have the option to press X and climb through. The basic control is lacking, so if you are trying to climb something or trying to escape Predator, don’t expect this to be a smooth transition into smaller buildings.

A third flaw was how cumbersome other players on my team felt. If they were stood in a doorway, there was no way to get past them other than charging until they yielded or just yelling ‘move!’ down my microphone. Should you find yourself with a teammate who wants to mess about and block you in, you are going to suffer the consequences..

While this is going on, you have to be wary of a certain dreadlocked space murderer who wants nothing more than to rip out your spine and hang it on its mantlepiece, before sipping on a nice glass of space wine in front of an open fire. Or whatever it is they do on their days off. Make no mistake, the Predator, like Jason in F13, is very powerful and has more than a few tricks up its netted sleeve.

If you are on the Fireteam, the Predator has a few tells which will tip you off to it being near. The first is its signature crackly clicking call – you know the one. The second, for better or worse, is just how heavy-footed it is. Predator is a bulky son-of-a-gun, sure, but there was one game where I and my crew were sheltered indoors by an ammo crate. We were immediately put on guard by the distinct clomping and banging of the Predator running on the roof above us, like a noisy neighbour in the flat above. If you are downed, the Predator will be able to insta-kill you, although dead players will have the chance to be brought back once a ‘reinforcement mission’ triggers.

This aside, the Predator takes a bit more getting used to, having more mechanics and gadgets at your disposal. There is a quick tutorial which gives you an idea of the basics, but it is immediately clear to see that playing as the Predator is where the most fun will come from.

Holding R1, you can perform huge leaps across the terrain. You can also scale certain trees that are highlighted red and navigate from branch to branch by moving to its end or pressing X when prompted to jump of your own accord. Moving from treetop to treetop felt surprisingly smooth, as did the transitions when moving to a different branch on the same tree.

Triangle will activate your cloak, which I must say did look really cool and accurate to the movies, and right on the D-pad will trigger thermal vision. The standard predator setup also comes equipped with two self-heals and a shoulder-mounted laser cannon, along with the signature two-pronged blades for close-up attacks. The other unlockable weapons for Predator, such as the Yautja Bow, do look like a hoot, though.

The main aim of Predator is to kill the Fireteam, taking their ‘trophies’ as a sign of your victory in the hunt.. As powered-up as you are, playing recklessly will no doubt lead an early grave.

Plenty of folks online are raising concerns over connectivity issues, although in my experience these were very few and far between, certainly nothing to deter my experience.

You may also have seen online many players of the beta decrying the graphics as PS2-like. Honestly, I think this is a bit of an exaggeration. It’s perhaps more PS3 era but this isn’t meant as a snide jab (Twitter is already full of those). Admittedly, I did encounter a number of textures that didn’t look as if they were rendered properly, or even finished – my assault rifle, for example. Some environments are also currently leaving a little to be desired and the framerate can be choppy. In its favour, however, is a pretty banging soundtrack and sound design – its clear a lot of attention has gone into this to make it as authentic to the Predator franchise and aesthetic as possible.

After a few hours spent with the beta, it’s abundantly clear that this beta is just that: a beta. There are a number of kinks to be ironed out and the Fireteam controls are in need of some big tweaks, sooner rather than later. I feel the beta, in its current state, may do more to put off potential buyers than entice them in, but there’s certainly something about Predator: Hunting Grounds which has the potential to be a fun jaunt down the line.

Whether it will be enough to pull players away from Call of Duty Warzone, Apex Legends or Fortnite after fixes at launch remain to be seen.

UPDATE: Since this article was written, Illfonic have updated the demo main menu with a notification to say that they are aware of the waiting times players are experiencing and working on a fix.