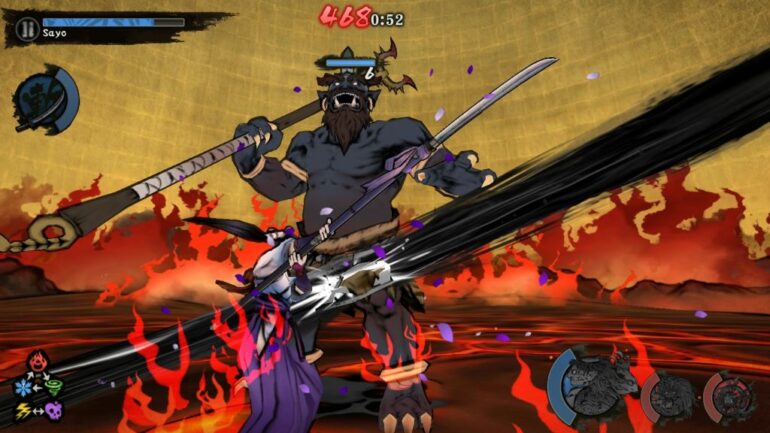 PlatinumGames, the developer behind such acclaimed action games as Bayonetta and Nier: Automata, has released a new action game, World of Demons, exclusively to Apple Arcade.

The game takes a lot of clear inspiration from Japanese folklore and historical art.

The official blurb for World of Demons reads:

“Players will assume the role of a samurai leading an army of yokai minions as they embark on a mission against evil. The game is set in a beautiful environment inspired by traditional Japanese artwork with gorgeous stages pulled from ukiyo-e woodblock prints. Along the way, they’ll meet samurai allies and a menagerie of yokai, each with their own techniques and combo possibilities. Players will expand their arsenal of abilities to conquer all foes that stand before them, ultimately facing the fearsome Shuten Doji, lord of all oni.

“Sharpen your steel as this samurai tale is about to begin.”

World of Demons is yet another feather in Apple Arcade’s cap, as the game subscription service recently added 32 new titles, 11 of which are “Arcade originals.” Along with World of Demons, other Arcade originals are NBA 2K21 Arcade Edition, Simon’s Cat: Story Time, Star Trek: Legends, The Oregon Trail, Cut the Rope Remastered, SongPop Party, and Fantasian, a fantasy RPG with story and music by Final Fantasy mainstays Hironobu Sakaguchi and Nobuo Uematsu, respectively.

If you’re interested in World of Demons, note that the game requires iOS 13.0 or later to work, and has a file size of 2.8GB.

READ NEXT: Biggest Upcoming Single-Player Games of 2021 & Beyond