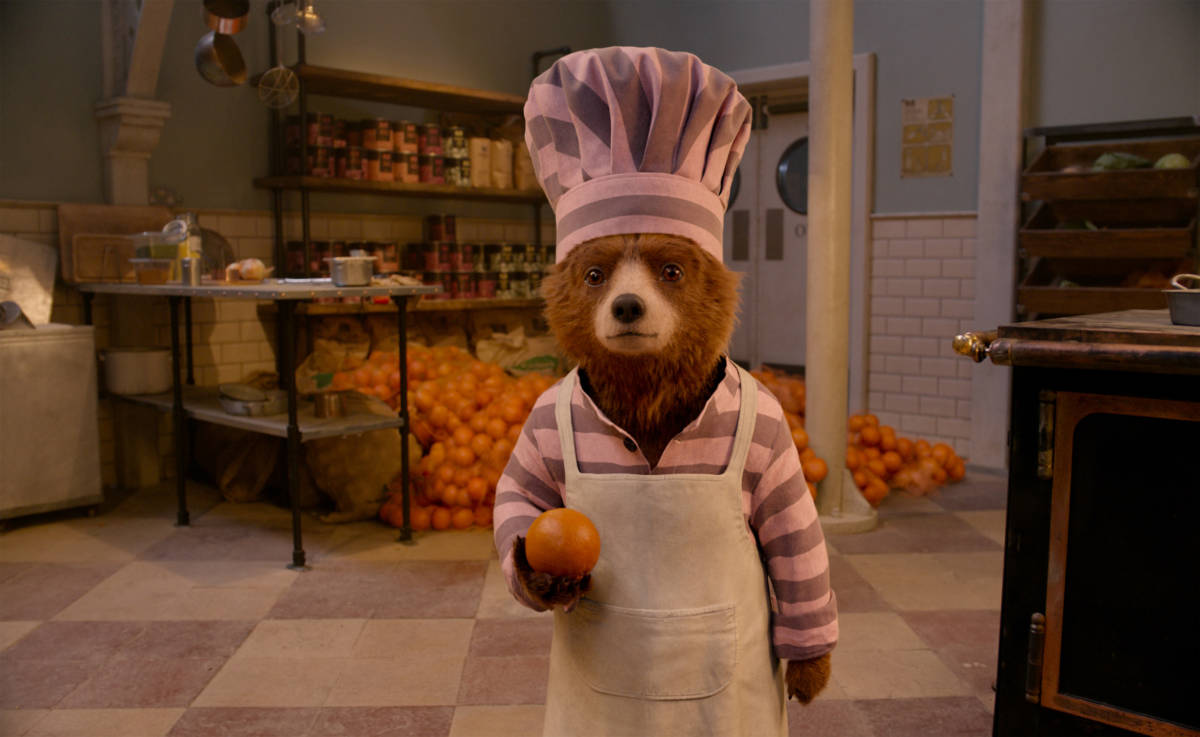 The lovable bear, Paddington, has returned for a new adventure in Paddington 2 and it’s fun for the whole family.

January is a barren month for new releases with Oscar contenders beginning to expand on their way to the big day. It may not be a contender but Paddington 2 takes movie goers on a wild ride in order to free the bear from prison. That’s right, the adorable bear has managed to find himself inside the joint and despite the impossible, he’s somehow able to find the good in other prisoners.

Following a brief prologue, the film quickly catches up to some time after the events of the first movie.  Paddington (Ben Whishaw) is settled down with the Brown family. He’s now popular with the neighbors. Well, most of the neighbors, anyway. Mr. Curry (Peter Capaldi), who fancies himself as the head of the Community Defense Force, is no fan nor is one-time stage star Phoenix Buchanan (Hugh Grant).

With Aunt Lucy turning 100 years old, Paddington wants to get her a gift, but not just any gift. It has to be the perfect gift and when he sees a pop-up book of London in Mr. Gruber’s antique shop, he knows what he has to do: work to make the money and buy it.

Getting the book is easier said than done. Buchanan disguises himself and breaks into the shop, Paddington chases him down, and is quickly arrested. Even though he professes his innocence, there’s nothing that can be done. While he’s challenged in finding a way to get home, Paddington is able to find the good and transform the lives of his fellow inmates. There’s a lot of opportunity for comedy while in prison and screenwriters Paul King –who also directs– and Simon Farnaby don’t miss any of it, including a fun bit with Paddington on laundry duty. Shortly after Paddington finds the goodness in prison chef Knuckles McGinty (Brendan Gleeson), the prison cafeteria is soon transformed into a fine dining establishment complete with a maitre d’. The rest of the prison house also gets transformed in a fun sequence.

The film returns to the themes from the first installment but takes things a bit further in the sequel. While Paddington may look for the good in everyone, they decide to explore what if there’s more than meets the eye below the surface. Filmmakers stay true to the late author Michael Bond’s source material in this way, even if they didn’t directly adapt one of the books for the sequel. Because of his wanting to make the world a better place for others Paddington is like the bear equivalent of Jefferson Smith, the senator played by James Stewart in the Frank Capra classic, Mr. Smith Goes to Washington.

As the bear is able to see the good, it’s the housekeeper, Mrs. Bird (Dame Julie Walters), who is able to see the bad in people, even saying one of the film’s most ironic lines: “Actors are some of the most evil, devious people on the planet. They lie for a living!”

Oscar-winning costume designer Lindy Hemming gives Hugh Grant a lot to work with as the narcissistic stage star he plays disguises himself to break into many London landmarks to find the clues in the book. Buchanan is a washed-up has-been and while there may be other talented actors who can portray the charm to the outside world while thinking only of himself, Grant does a heck of a job. The film’s antagonist also lives in Windsor Gardens and is somehow able to hide his mischievous side from neighbors.

Whether it’s bringing the pop-up book to life in a lovely animated sequence or Paddington himself, the animators at Framestore have done a beautiful job. Production designer Gary Williamson, director of photography Erik Alexander Wilson, visual effects supervisor Glen Pratt, Framestore animation supervisor Dale Newton, and Framestore animation director Pablo Grillo are able to bring the book to the big screen in a beautiful way as Paddington dreams of showing Aunt Lucy the city of London.

The release of Paddington 2 comes at a time in which there’s a lot of cynicism in the world but there’s good to be found. An adorable film, it provides another fun-filled adventure.