Nintendo Switch: How To Create Folders/Groups 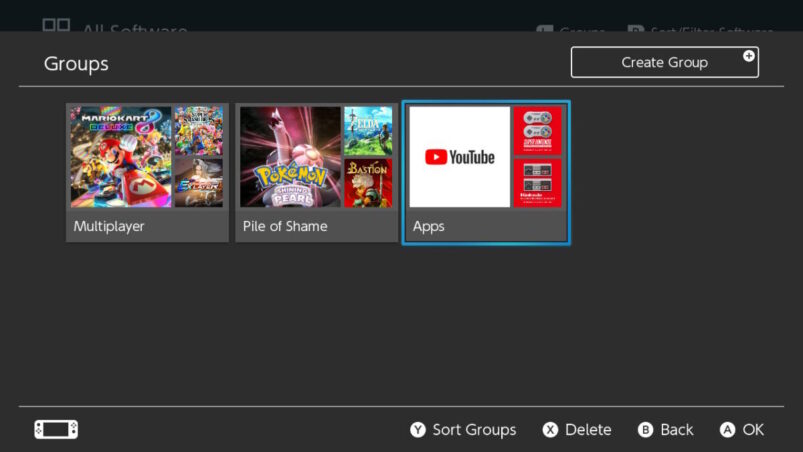 Thanks to the latest Nintendo Switch firmware update, version 14.0.0, a much-requested feature has finally been added to the console: the ability to create folders (which Nintendo refers to as groups) to sort your collection. Here’s everything you need to know about how to create your own folders on the Nintendo Switch.

In order to create groups, you’ll need to download the recent version 14.0.0 system update, and you’ll only be able to create groups once you’ve got over 13 software titles downloaded onto your Nintendo Switch. These titles could either be games or apps.

Once you’ve met those requirements, head over to the All Software screen and press the L bumper in order to access groups.

The first time you press it, you’ll be prompted to create a group using the different titles you have installed. You can create up to 100 groups, and each group can have up to 200 titles in it. Titles can also be added to multiple different groups, allowing you to essentially sort by multiple criteria. You can even search by a keyword.

If you need to edit your folder, go back to your groups, highlight the group you want to change, and press R.

While the ability to create groups isn’t the most necessary update ever added to the Nintendo Switch, for players with a huge amount of software on their Switch, this is a bit of a gamechanger. Even if you just plan on using it to arrange your pile of shame, it’s still a useful feature.

READ MORE: When Do New Nintendo Online Games Come Out?