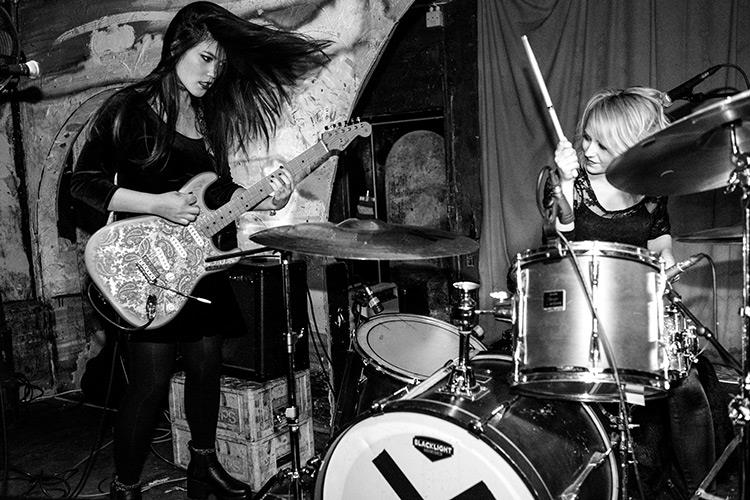 DOLLS promise to ‘make Robert Johnson crawl out of his grave for a dance’ with their music, and as I mentioned when we featured them in PULSE RECENTLY, that’s one helluva promise to make and no mean feat to follow through with. As it turns out though, it’s not so difficult for DOLLS – it’s just what they do.

Aside from their inclusion in PULSE (obviously a highlight for anyone), the duo released their debut single ‘Killing Time’ recently to sign off last year and get this year rolling. This cultured vulture caught up with the two in the two-piece, Jade and Bel, for a chat about what’s on the horizon for DOLLS, what got them here, and their place in the music scene.

Hello there, how’s things, and would you care to introduce yourself?

Hello! we are Jade and Bel.

We recently included DOLLS in our music feature Pulse, but instead of me going on about your sound again, how would you describe it?

J: I guess I would describe our music as Rock based with other influences. I love a lot of surf guitar music, as well as Punk which I think you can hear in the music. I generally write the songs with certain themes, so ‘Killing Time’ I wanted it to be dark and moody and the 2nd track off the CD ‘Sandman’ was heavily influenced by rockabilly music.

It’s a given being a two-piece that your sound is very riff and rhythm driven, was this a conscious choice or just what came naturally? The eventual end result of your musical influences?

J: OO I always love music with a good riff. I think until about the age of 18 I didn’t like any rock music without a good bluesy riff. Our sound is actually becoming slightly less riff based the more we jam together. I’ve also expanded my pedal collection so I’m experimenting with different guitar ideas.

B: Yes, actually our sound is developing towards a more rhythmic direction; drums won’t be as ‘choppy’. However, we still want to keep our unique music style throughout. Bad news is I sing more!

You recently released your debut single, ‘Killing Time’, what’s the reaction been like so far?

J: It has been great so far! I’m surprised that people from around the world have actually managed to find the single through blogs and social media, and it’s always a nice feeling when we receive messages to say they really love the song.

Speaking of the single release though, is there anything else in the pipeline? An EP?

J: Hmm, we are thinking of doing another single perhaps before an EP. We have a song we love that we are going to record – it is completely different to ‘Killing Time’.

B: Exactly, we have many surprises coming up and we are working on lots of new material that will go live in the next few months, it’s a very exciting time for DOLLS.

Aside from future releases, what else is on the cards for this year? Where can our readers come and catch you live for example?

J: We are going to be gigging as much as possible this year! We have 14th Feb at The Garage, and 27th Feb at The George Tavern. We are also planning on doing some gigs outside of London.

B: Also, we’re always up for considering new gigs, so get in touch if you have a good gig to offer us!

Rock music in general is often viewed as a notoriously male dominated genre. Though, there are more and more female fronted or all-female bands coming through. Do you think that the landscape of rock has changed in that respect, or do you feel that there’s still more work to be done?

J: Like you said, there are more and more female rock bands coming through and a lot of them are ace! I feel also women are generally being respected more as well in the music industry and taken more seriously. I think the bands that do get a lot of recognition though are still predominately male, but I’m hoping that will change in time.

B: Exactly, like Jade has said it can be tough being taken seriously in such a male-dominated environment but to be honest, we’re having a really good reception so far. People are valuing us for our music.

Are there any bands currently up and coming that you’d recommend we get on to checking out?

J: I’ve found so many bands I love recently. There’s this band Prom (who also have an Asian front woman, Oh yeah!) and me and Bel recently saw Saint Agnes who we loved. Rouge and Pony and Trap played our single launch back in November and they were brilliant!

B: Too many! Definitely check out Rouge, Antimatter People, Our Girl, Kayvs, Ex’s…

And finally, at Cultured Vultures we have our own cultured vulture named Voltaire. If you had a pet vulture who was of particular culture, what would you call it?

J: Oo thats a tough one! I would call him Elwood Blues as my favourite film is The Blues Brothers!

B: Billie-a-billy. Billie is my little doggie in Spain and the rest is self-explanatory! ;)