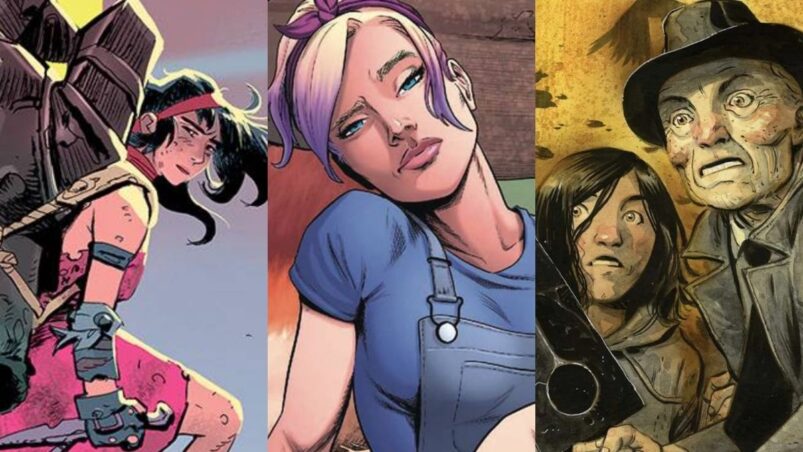 June 2022 promises a huge month of noteworthy comic releases. On the indie side of comics, popular publishers AHOY, Dark Horse, Scout, AfterShock, and Image Comics are bringing the heat with new first issues and trade paperback collections. DC Comics publishes its Pride anthology this month, as well as spotlighting Black superheroes such as Nubia in Nubia and the Amazons #1 and a new Black Adam series.

The number of new comics of June 2022 you should check out far exceeds the mere 10 titles included in this list. Of the 10 diverse entries here, there’s a comic to attract nearly any comic reader. Whether you’re looking for a new horror series to pick up or want to laugh at a satirical sci-fi comic, take a look at some upcoming June comic releases that sound outstanding from their premise and art previews.

Step by Bloody Step, the wordless fantasy tale from Image Comics, takes its final step with its concluding fourth issue this June.

Following the tragic ending from the previous issue, the complex cast of characters fight for justice in Step by Bloody Step #4 . Whether that ending will satisfy readers and provide answers to all the secrets simmering within the silent pages, we don’t know yet.

This series has proven itself a fascinating project. Art speaks where words don’t in the comic series pushing conventional comic boundaries. Removing language means the art has to perform 100% of the heavy lifting, and Step by Bloody Step has accomplished this task sensationally. Issue #4 should be high up on the list of new June 2022 comic releases you should read.

Written and illustrated by James Stokoe, the Orphan and the Five Beasts TP collects the kung-fu epic comic miniseries as a trade collection.

This is a story drawing heavily on manga influences such as Berserk in its narrative revolving around an adopted warrior orphan on a quest to purge the world from demonic evil. Orphan Mo sets out to locate and kill five beasts; her former corrupt disciples whose powers are a blight on the land. It’s up to Mo to save the world, even if it means committing gruesome acts of violence.

Orphan and the Five Beasts looks at loyalty and vengeance in a series where the themes are roused by kinetic illustrations full of surrealist energy. Readers who followed this series in single issues know the ending doesn’t provide a satisfying conclusion. There’s no cause for alarm, though, since Stokoe promises a follow-up arc in the future to build upon the cliffhanger ending in issue #4.

Justice Warriors #1 is slated as an irreverent dystopian satire that looks to draw influence from Adult Swim animated shows and Archer.

Inside Bubble City, the affluent 1% thrive inside a bustling metropolis devoid of crime or injustice. But outside its walls, the Uninhabited Zone is a dystopian wasteland. Its inhabitants are poor and many, and mutants try to survive in the last remnants of the world before. When one of the Bubble City PD members, veteran cop Swamp Cop, loses his partner to a freak accident, he must overlook his trauma and teach his eager new rookie partner the tricks of the trade.

AHOY Comics has been on a streak, hitting the mark with every new series released. Yet this newest entry looks dissimilar to any other comic I’ve read from this publisher, unafraid to take chances on the bizarre and unusual. It’s safe to say that weird dark comedy works in AHOY’s favour more often than not, so you should check out Justice Warriors #1 in June.

Surprisingly, it’s already been well over a year since the first issue of By the Horns from Scout Comics hit shelves. After a brief break, the fantasy-steampunk adventure series returns as one of the most anticipated comic releases with By the Horns: Dark Earth #1.

The new arc takes place six months after the shocking sky battle against evil sorceress Feng Po set out to steal the continent Solothous’ magic. Our hero Elodie and her animal companion Sajen return to Wayfarer. After their epic journeys fighting monsters and saving the world from a magical wipeout, their new vocations as farmers feel dull for the two. However, the adventurers are soon called to action when a mysterious blight threatens Solothus once again.

By the Horns has made a name for itself outside the indie comic scene due to its RPG-style narrative and mind-blowing visuals from Jason Muhr. I’ve been a huge advocate for this series because each issue seems to amp up the stakes, intensity, and creativity. I expect nothing but excellence from this latest issue, which will hopefully be released in June.

Once again pulling double duties on both writing and art, Crook’s new supernatural action comic looks nothing short of creative brilliance. According to the press release, The Lonesome Hunters #1 follows an elderly, rusty monster hunter forced out of hiding after meeting a young girl who changes his destiny. The two venture out together to fight supernatural beasts and try to end the ancient evils laying waste to their world.

The story sounds fascinating, with Crook hinting at themes such as generational trauma and how youth can positively influence their elders. Readers should be on the lookout for this thought-provoking first issue slated for a June release date created by an ingenious master of comic craft.

Aftershock Comics presents a high-speed story about a chicken restaurant chain owner who accidentally gets caught up in mob business. Mitch’s Hot Chicken franchise owner Mitchell Moss is a normal guy with a loving family and reasonable means. But when he discovers his business partner has been allowing the mob to smuggle drugs by way of Mitch’s chicken buckets, Mitch suddenly finds himself an enemy of a ruthless group of gangsters.

Chicken Devil has been a finger-lickin’ treat in single issues, from its derisive humour to its stellar design elements. There’s comedy, drama, and blood similar to HBO’s Barry, as well as mind-blowing lettering from acclaimed letterer Hassan Otsmane-Elhaou. Pick up Chicken Devil on your next trip to a fried chicken fast food joint.

Perry White has served Metropolis as the Daily Planet’s editor-in-chief for years. According to All White’s years in a cutthroat journalism career calls for a celebration. And with his colleague Jimmy Olsen around, we can expect mayhem and the plausible drop-in from Superman.

The one-shot features the new short story and three reprint stories spotlighting the incomparable Perry White, with readers hoping this special is a predecessor to a Perry White spin-off series. We’ll have to wait for a breaking news story until then.

Another comic I foresee earning award nominations, the first issue of the four-issue sci-fi comic series Agent of W.O.R.L.D.E. from Scout Comics debuts in June.

Phillip Blank works to keep the world safe from threats like aliens and time travelers as the prolific agent of the sci-fi spy organization W.O.R.L.D.E. Yet, Phillip feels doubtful and unfulfilled by his life-threatening missions and near-death escapes. He wants more out of life than committing ultraviolet acts for the greater good. In this first issue, Phillip goes on a personal journey of self-discovery as his secrets threaten to shatter all he’s worked for at W.O.R.L.D.E.

Tech Stanford undergrad student Ben Sharp dreams of achieving the Silicon Valley Billionaire lifestyle. When the process of designing a self-help app accidentally leads him to unlock a type of mind control technology, he tries to use the app to convince addicts into breaking their addiction. Mind control is dangerous though, and Ben quickly loses control of the manipulative Mindset app.

I’m fairly certain a number of June comic releases will set a high bar for the rest of the year’s comics to compete against. Mindset #1 adds to the growing list of comics with an atmosphere of innovation evident through the preview pages alone.

My top pick for what will likely prove itself not only a contender for the best comic of June but also best comic of the year is none other than the cosmic psychological horror take on the King of Atlantis, Aquaman: Andromeda #1.

Superstar creators Ram V, Christian Ward, and Aditya Bidikar bring their high-caliber skills together for this new DC series set in the dark depths of the sea. Inside the experimental submarine Andromeda said to generate power from a black-hole drive, a fearless crew descends into the Pacific Ocean. Their mission? To find out what exactly lies below in the oceans’ spaceship graveyard dubbed Point Nemo. But when pirate Black Manta is also drawn to the enigmatic structure sunk in Point Nemo, Aquaman follows him to see what lies below.

Plunge below the waves with the gripping new horror project from some of the comic industry’s most esteemed talents by grabbing a copy of Aquaman: Andromeda #1.

READ NEXT: 15 Best Horror Comics You Should Read