Even in the face of having to barter for supplies and their own personal demons, New Amsterdam hangs tough. 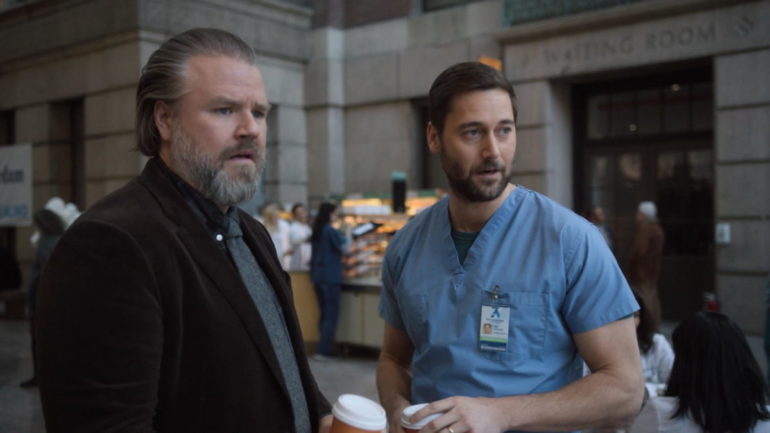 Max has a bit of a rude awakening in the latest episode of New Amsterdam. “Five Miles West” picks up on Max’s journey sans Helen and it’s not exactly as he would have imagined. It’s a startling reminder that he can’t do whatever he wants, whenever he wants anymore. What is commendable about this aspect of the episode is that despite being a doctor, New Amsterdam doesn’t let Max get away with murder. Just because he’s a doctor in a high position, it doesn’t mean that he can stomp all over other people. Thank you New Amsterdam for going against the norm and doing something different.

Watching Helen push Max away so he can concentrate on his health is an amazing storyline for New Amsterdam. It’s daring to make such a move because these two characters are everyone’s favorite ship right now, but by putting distance between them, it’s giving more life to their story. Max is not well, and if he doesn’t concentrate on his health then what else really matters? Thanks to his new doctor, Virginia, viewers became aware of just how bad Max was in regards to his treatment. If anything, New Amsterdam is using this story as a PSA for people to pay closer attention to themselves and their health.

“Five Miles West” brings out a side of Max that he’s been trying so hard to keep away. He’s scared of his diagnosis and he’s scared of his treatment process. He goes as far as to say “if you stop moving, you die”. The idea being that if he keeps going at full speed, his cancer won’t be able to catch up to him. This is an interesting thing to take note of. As a character that is constantly trying to make others lives better, Max is struggling so much himself. It’s devastating because he can’t help himself and he’s avoiding his own well-being. New Amsterdam is pointing out something very critical here. We often ignore what’s good for ourselves and deflect by focusing on other things or other people. But that’s not how it should be, and Max’s situation is something we can all learn a lesson from.

“Five Miles West” spends a lot of time on Max’s bartering system. What is this bartering system about? As Max comes to learn, New Amsterdam is hemorrhaging money and as the medical director, it’s Max’s responsibility to do something about it. So what does the world’s most creative person do? Come up with a bartering system, of course! He brings in the people that have outstanding bills and says in exchange for paying off the bills, they do things around the hospital. How genius is that? Of course, it may not be the best way to go about things and could be considered wrong on many levels, but it’s something, and it is something creative.

New Amsterdam spends some time on Helen’s journey to becoming a mother and mixes in a surrogacy case with it. Dr. Panthaki (Helen’s boyfriend) offers to be the sperm donor but Helen says it is too early to take that step in their relationship. Kudos to her for making that stand and communicating it in a way that respects their relationship. What breaks our hearts in “Five Miles West” is the surrogacy case. Long story short, a patient comes in and delivers a baby, but loses consciousness during delivery. It turns out that she was a surrogate mother for her best friend’s baby. But because they are in New York, the law dictates that surrogacy is not considered legal and the decision falls to the next of kin, not the family that was participating in the surrogacy.

This presents a very complicated issue but it’s one that we don’t hear about often. New Amsterdam does a tremendous job depicting this story in a way that really tugs at your heartstrings. It’s a topic not everyone knows about, so New Amsterdam shedding a light on it is extremely important. It’s very devastating situation that results in a happy ending, but that is not always the case, as we know. The worst part is that if the delivery had happened in New Jersey, then this would have been a non-issue, but crossing the state line made all the difference in the world.

Let’s take a moment to talk about Kapoor’s storyline. We know that his wife has passed away, but he still carries a deep connection with her, one that he has to face head-on in “Five Miles West”. There is tension between Rohan, Ella, and Kapoor and it gets extremely complicated when Kapoor sees Ella wearing his dead wife’s bracelet. There is a point to take note of here and something Kapoor realizes as well. He has spent a lot of time focused on what Rohan is doing wrong and has assumed the worst of him. He even thought that Rohan had sold his mother’s bracelet, but this was not the case. New Amsterdam hones in on this misunderstanding in a very tragic way. Kapoor realized that he’s not the only one who lost someone, Rohan did too. Focusing on family dilemmas is a very integral part of any story, and the Kapoor storyline is one that we can take a lot away from. Never assume the worst and give people the benefit of the doubt.

New Amsterdam is doing a phenomenal job with each and every character arc, pushing them along in a way that’s respectable and exciting. They’re not dragging anything along as they approach the end of season one, while still leaving some questions and excitement for what is to come. The hope is that Max will come to terms with his diagnosis and finally focus on the seriousness of it, for the sake of himself and his family. Additionally, we hope that the season will give Helen a proper, well-deserved ending because she has been one of the stand-out characters of the series so far, and given us a lot of inspiration and encouragement. Here’s to a few more episodes of one of the best medical dramas of recent times!