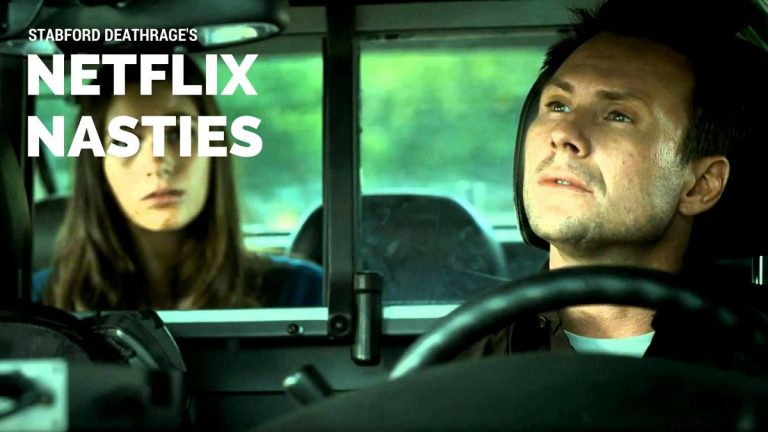 In 1994, Harlan Diehl viciously murders his family at their farmhouse amidst cliched shaky cam footage. His mother-in-law is killed mid-smirk, who slumps unconvincingly across a toilet. After humorously grunting, Diehl is killed by police. A baby is the only survivor of the carnage, who seems to be slightly and unconvincingly possessed by some sort of paranormal entity.

Years later, irritating, disposable teens reenact the crime and film it for a journalism presentation. I’m not sure what imaginary high school these 30-year old high school students go to, but if I was given the opportunity to make gory slasher films for a school project, high school might have not been such a crushing bore. Anyway, one of the students becomes overly concerned about their car’s interior from arterial spray, but not too concerned about a continuity-defying squeeze bottle.

The main character borrows video equipment from the lighter fluid-huffing villain who plants video equipment in the girls’ locker room for pervy cop Christian Slater. Suddenly, and by ‘suddenly’ I mean ‘predictably’, the huffer views VHS crime scene footage of the Diehl murder scene and becomes inexplicably possessed by the ghost of the murderer. If you’re wondering why that’s happening and beginning to think that doesn’t seem to make a lot of sense, that’s because of the static-filled film edits that are reminiscent of the film Ringu, and one would almost expect Samara to show up. She’s doesn’t, unfortunately, which would’ve really livened things up.

Anyway, the Huffer bores at parties and plants a surveillance camera in a teddy bear. He kills his irritating coworker by stabbing him in the brain with the handle of a tripod. While I’m glad the tripod got a couple of cameos in the film, I wish other image-steadying equipment was used more often in the making of Playback.

Because it’s in the script, the main character goes to the scene of the Diehl murders. His foster mom shows up at the abandoned farmhouse because she’s a cop and spoils the ending. I’m not going to insult your intelligence with an ‘Oops, spoiler alert’, when I know you would have figured that out too.

Utilizing the internet, it’s easily discovered that Harlan Diehl was a foster child and related to Louis Le Prince. Who is Louis Le Prince? Go ahead and check Wikipedia, I’ll wait. Meanwhile, prepare for your mind to be blown.

Did you check it? I’m absolutely certain you didn’t, and you should. I’ll continue to wait.

Did you check it this time? Ok, I’ll act like you did although we both know you didn’t. Here’s the Wiki short version because you couldn’t be bothered to look it up: Le Prince made 3 short films using a single lens camera he invented in the 1880s, which was several years before Lumiere and Edison shot their films. He vanished while aboard a train for Paris, and his body was never found. Unsurprisingly, Edison tried to take credit for Le Prince’s invention. Everyone who appeared in these films died a short time later. Seriously, the plot of a much more intriguing movie has unfolded in real life over 100 years ago. Was Le Prince murdered in a film-related conspiracy? Did he commit suicide? It’s genuinely mysterious, and because of that, this plot device takes up about 15 minutes of screen time.

Suddenly, the huffer coughs up blood, and develops a terrible neck rash. I’m not sure why. Maybe because spiritual possession results in zombification? It’s never explained, so who knows?

In another turn of events in a film that is already overly complicated, the lead character goes to the video store, which is incredibly unlikely as most people illegally download films from the internet, and because no one checked Wikipedia, Louis Le Prince turns out to sort of be some sort of evil entity that hops from person to person possibly through his bloodline, which doesn’t exactly makes sense. Because he has a somewhat ominous sounding name, he becomes a paranormal scapegoat, and I’m not even going to dignify this nonsense by commenting on it. However, the DVD for the influential film Peeping Tom

makes a cameo appearance. Maybe you should watch that instead.

Anyway, if you had checked Wikipedia, you’d find that Le Prince was quote ‘gentle, considerate, and placid’, but whatever, because it’s a well-known fact that 19th-century film makers become evil and bestowed with vaguely murderous otherworldly powers after death. Everybody knows that. Duh.

An unplugged TV starts showing programs from the great beyond because it’s in the script and has never happened in any other movie ever, and it possesses one of the female characters, and you can tell she’s possessed because of the smoky eyeshadow. She stabs her boyfriend with a broken CD, which is incredibly unlikely as most people don’t know what CDs are because they illegally download music from the internet.

Christian Slater interrogates the student he’s been stalking, and some sort of glare-reducing tarp is visible in the cop car windows. After an awkward lap dance and more awkward movie, the Huffer shoots Christian Slater’s head off, splattering the possessed and slightly undressed student’s face with aerosolized gore. She seemed to be ok with it.

Suddenly, some family secrets come to light, and the Huffer looks more and more like he’s late for an audition for the upcoming film Suicide Squad. Then he kisses some duct tape. More movie happens, and it finally ends, and not a moment too soon.

Normally, I wouldn’t have bothered with Playback. It wasn’t mindbogglingly awful, it was just awful, and I don’t really have time for films that are merely awful. I’m not sure how a film about murder, spiritual possession, stalking, voyeurism, foster parenting, and film making could be so tedious, but it somehow manages. The villains in the film are already pretty monstrous on their own, and don’t really need help from a paranormal entity. However, I am glad it enlightened me about the brief, mysterious career of Louis Le Prince. Someone should make a movie about him.