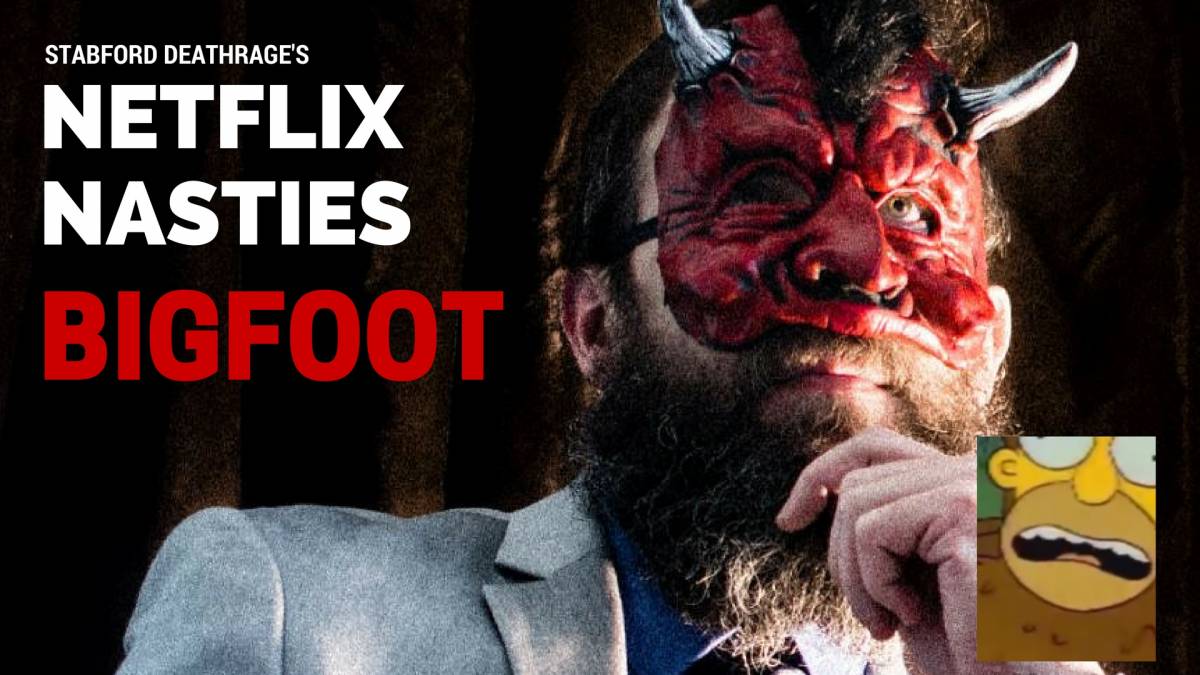 Hello, I’m Stabford Deathrage, and today we’re going to review the documentary film Bigfoot from 1997, or Mystery Files: Bigfoot, or Bigfoot Monster Mystery, or The Monster Files: Bigfoot Mystery, or whatever it’s being called right now.

The film opens with a guy playing drums in a snowy Canadian forest. Could it be Rock and Roll Hall Of Fame inductee, Neil Peart, drummer for legendary Canadian progressive rockers Rush?

After some lukewarm drum fills, the drummer who isn’t in Rush then discusses a pungent smell. Then there is footage from the infamous Bluff Creek Bigfoot sighting from 1967. Then there is shaky cam footage as someone runs down a path, and then there is footage shot in Oregon in 1996 of a large Bigfoot-like creature which is conveniently partially obscured by foliage. None of it is particularly interesting.

An irate hunter calls in to a radio morning show, raging about some sort of Bigfoot fact. Obviously, it’s pretty tedious, as radio morning shows generally are. Unfortunately, one has to see it as well as hear it.

A scientist is interviewed about hair samples as multiple bunsen burners flame around him, then he says he would have to ‘drag a corpse from meeting to meeting’ to get his fellow scientists to believe him about the existence of Bigfoot. I would pay pretty good money to see a scientist drag a 500-pound, 7-foot tall Bigfoot corpse around the halls of academia, although I probably wouldn’t want to smell it. Then the drummer continues drumming in an attempt to entertain Bigfoot, this time with excessive cowbell.

Suddenly, a guy plays a tape of supposed Bigfoot noises, but it sounds suspiciously like The Cramps performing Tear It Up from the classic concert film Urgh! A Music War, and I’m not 100% convinced it isn’t.

Suddenly, some dude whips out one of Shaquille O’Neil’s shoes to compare it to the size of a suspicious-looking plaster cast of a Bigfoot track, which raises more questions than answers. I’m not concerned with how he got a plaster cast of a Bigfoot track, but more concerned about where he got one of Shaq’s shoes. Were they found in the same place? That certainly would explain part of the Bigfoot mystery, but I doubt Shaq has time to confuse and startle Bigfoot hunters in the wilds of Canada, and Shaq-sized Bigfoot costumes are probably as hard to find as Bigfoot.

Then a guy claims Bigfoot gave him some bark, which seems unlikely. Then the drummer wears a sweater covered in Bigfoot prints, which again raises more questions than answers. Did he buy this sweater, or did he knit it himself? Does it come in my size? Should I order one for myself? Mysteries upon mysteries.

Someone then claims Bigfoot is an invisible telepathic omen, and I’m not convinced. Is the phrase ‘invisible telepathic omen’ a new codeword for ‘bullcrap’ or is it the name of a new indie band? It could go either way, but I would probably download a track from a band called Invisible Telepathic Omen. Then a guy wearing a fox as a hat says the confusing phrase, ‘Prepare to be bedazzled’, and I’m half expecting someone to begin applying phony gemstones to that Bigfoot sweater.

After surfing the internet by a campfire miles from wifi, Mr. Bunsen Burner compares Bigfoot droppings to a 36″ sausage, which is an alarming visual that could put people permanently off breakfast and should send shudders through the pork industry, as I’m certain Bigfoot producing a 36″ sausage probably sent shudders through Bigfoot. Then there’s lengthy footage of the filmmakers faking the earlier Bigfoot footage from 1996, which raises more questions than answers. Why would a documentary film maker fake footage and include it in their film? I don’t know exactly, but I’m assuming actual Bigfoot would’ve wanted a paycheck.

Bigfoot (1997) or whatever it’s being called today is mind-numbingly boring and just as confusing. However, I’m going to mildly recommend it for the drumming footage, the Bigfoot sweater, and the sausage reference.​​