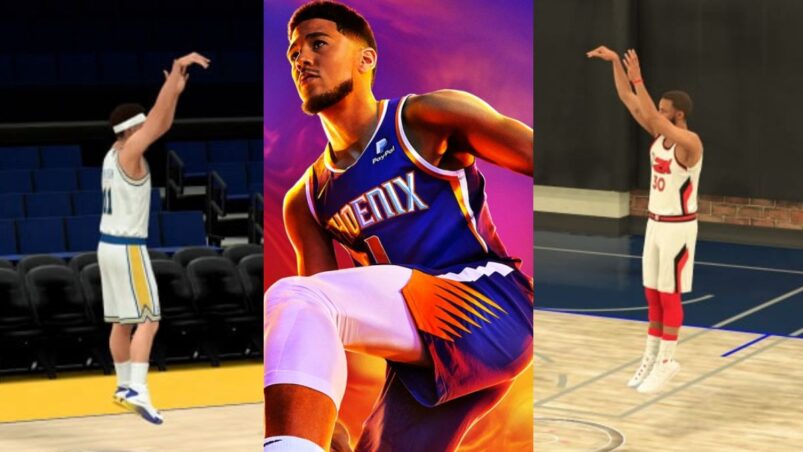 Over the past few years, we’ve seen three-point shooting become an integral part of the NBA. 2K Games’ annual basketball sim NBA 2K has followed a similar trend with shooting beyond the arc going from a difficult specialty to a core part of the game every year. Given its growing importance, it is always ideal to scope out the best three-point shooters in each game, and NBA 2K23 is no different.

It is especially important to grab strong floor-spacers in the latest edition of NBA 2K as the jump shot has been reworked to make it quite difficult to knock down shots with any consistency. For that reason, we’ve put together this list of the five best three-point shooters in NBA 2K23.

There’s no better player to kick off this list than the man who changed basketball forever. Curry, along with the Golden State Warriors, is a huge reason for the growth in popularity of the three-point shot in the past decade. As such, he is rewarded with the highest possible rating in the game and comes equipped with a whole host of shooting badges that should have him draining buckets all game long.

If you’re scratching your head reading the name Derrick Walton Jr. then fear not because you aren’t alone. Despite having the second-highest outside scoring rating in the entire game, Walton is a free agent who has rarely played in the NBA. Why is that, you may ask? Well, he’s not very good at anything else. His overall rating in NBA 2K23 is just 69 with his defending and inside scoring being notable liabilities. Nevertheless, he deserves a spot on this list.

Bane is the perfect number 2 option to Ja Morant in Memphis thanks to his excellent scoring efficiency. Despite being in the league for just two years, the 30th pick in his draft class has established himself as one of the league’s elite shooters. Bane’s all-around game is strong, which makes him the perfect knock-down shooter to add to your team.

The Duke product came into the league as a shooting specialist and has only grown that reputation during his career. Last season, he shot an incredible 0.449% from beyond the arc and has been rewarded with a three-point rating of 88. He is a prototypical shooter who, in our experience, has a very easy jump shot to master.

No list of the best three-point shooters in NBA 2K23 could be complete without the second member of the Splash Bros. Curry’s partner in crime Thompson has been slowed down due to injuries in recent years, but he remains one of the strongest shooters in all of basketball. Like his teammate, he has a whole host of shooting badges that make him a lock to score from range.

READ NEXT: FIFA 23 World Cup: Everything You Need To Know