FIFA 23 World Cup: Everything You Need To Know 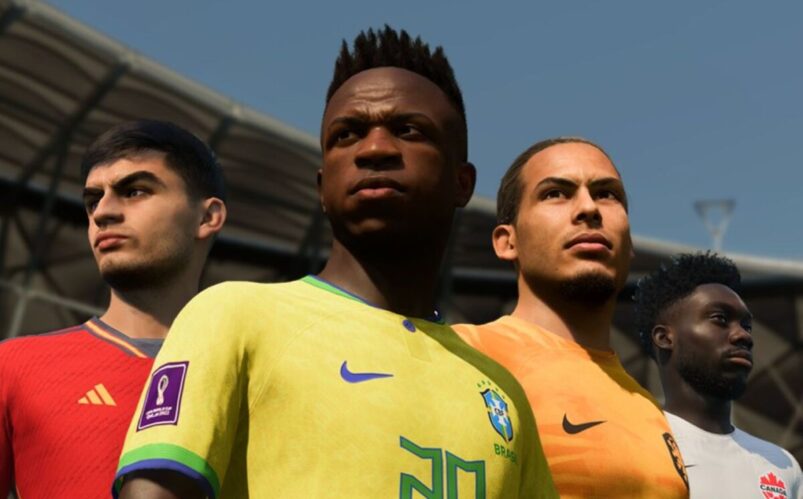 In keeping with real-life events, on November 9th, EA Sports added a game mode to FIFA 23 for the Qatar 2022 World Cup.

It’s excellent news for lovers of the franchise and promises to add a degree of zest to a game series that non-fanatics often deem repetitive. Does FIFA 22 have a World Cup mode? No. Exactly. It’s a real difference between FIFA 22, and FIFA 23 – it’s new and exciting. It’s not as if the FIFA series is excessively boring anyway, as the gameplay advances each year. Passes become more refined, and just try playing a match with Kylian Mbappe, PSG and France’s talismanic attacker. They have his movement patterns beautifully sketched out.

But enough about the game as a whole, we’re talking about a certain (real) World Cup which commences on November 20th, 2022, with a fixture between hosts Qatar, and Ecuador. However, if you’re raring to go already, FIFA 23 has you covered. Here’s what to expect from FIFA 23’s World Cup content.

In a fairly predictable turn of events, it is of course possible to play the game from the group stages, onward, in an offline setting. This is Tournament Mode, which also has custom options that enable you to add unqualified national teams, so, if you’re Scottish, you’re in luck. Sort of.

Customisation in offline Tournament Mode also extends to swapping groups, so theoretically it’s totally possible to create some ultra-masochistic group of death scenarios, maybe one including  France, Argentina, Belgium, and Brazil. Equally, though, ramming the world’s best sides into one group, of which only two can progress, will have a predictably negative effect on your tournament.

Beyond that, offline gamers have access to EA’s archetypal, yet Qatar-style, Kick Off mode, which is a sure fire way of getting to grips with the 32 competing national teams.

Needless to say, it’s the online aspect of FIFA 23’s World Cup mode that promises to excite gamers the most. You’re able to enter the Round of 16 using a team of your choice (qualified or unqualified) and face random online opposition, all vying for the online World Cup.

Changes to the tournament’s setup mean that you can limit the calibre of the team you face. Playing as weaker sides will be very challenging without the ‘Restrictive’ mode in place, as most players will want to use the strongest national sides possible.

A feature typical of EA games is cross-play. This means that you’re able to play against users playing on a variety of consoles, which adds to the total player pool, giving you a better chance of a quicker match. The total online players for the Round of 16 mode, at the time of typing, stands at over 2000, so there’s ample competition.

EA’s World Cup content thrusts itself at you — from the title screen, Qatari-themed posts are everywhere. While some options from the World Cup: Live section, such as Featured Gameplay and Online Quickplay, are fairly simplistic, Your World Cup looks more interesting. It launches on the same day as the tournament itself, and you’re able to, as the game states, “inherit a team’s World Cup progress into Tournament Mode and write your own history.” If you’re of the neutral persuasion, this is an intriguing way of engaging with EA’s World Cup content, but gamers supporting qualified nations may not. If you’re superstitious, you might swerve this option.

Needless to say, there are, naturally, issues that you should be aware of with the World Cup in FIFA 23.

Only two stadiums from the real Qatar World Cup are featured in-game – not a problem for the majority of gamers – but a little more detail would’ve been good. Trudging onto the same pitches, however, is something that club teams do week in, week out, regardless.

Also, from personal experience, the Round of 16 mode has been rather difficult to use, as games are cancelled at the last second with no adequate reason given. However, the general smoothness of online gameplay in FIFA 23 is solid, and these are likely just early hiccups. FIFA 23’s Qatar World Cup modes aren’t world-beating, but they are enjoyable and certainly enhance the excitement that anticipates a major international tournament. Try it out yourself; you’ll probably be glued to the screen for an hour or two.