Can I get a MOOSE! 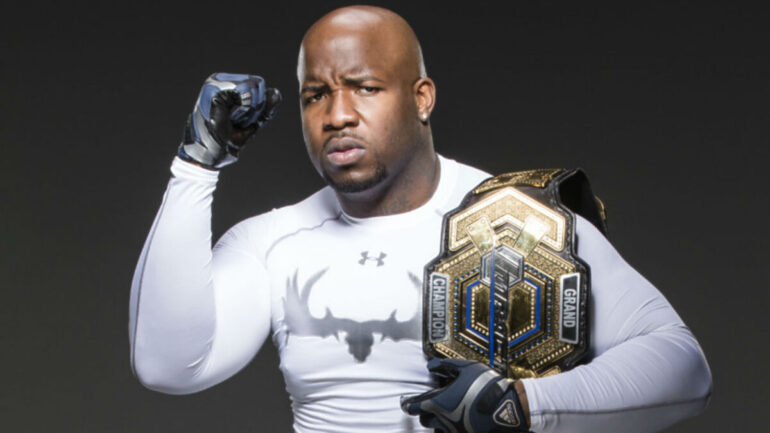 All eyes have been on Impact Wrestling the last couple of months since they first announced that AEW World Champion Kenny Omega would be appearing. There was extra excitement when it was announced that he would compete in a six man tag at the Hard to Kill PPV. Coming out of the show, the man on everyone’s mind wasn’t even supposed to be in the match: Moose.

After a short run in ROH where he was touted as a future star, Moose showed up in Impact in 2016. This was surprising as it felt like a matter of time before WWE snapped him up, you could see why as he has the look that Vince dreams about combined with a natural ability.

After four and a half years with the company, it’s shocking that he hasn’t had a reign with the Impact world title. He proved how well he could handle being a top guy when he was the star of Impact’s first show of the pandemic era, showing up and declaring himself the TNA World Champion, which was supposed to tie into a storyline where Moose challenged TNA legends, culminating at the cancelled No Place like Home show.

According to the man himself, he would earn the TNA title in a King of the Mountain match. No word who else would have been in the match, but it makes sense as this was TNA’s signature match for several years. It can be hard to be taken seriously when you declare yourself a champion, but somehow Moose managed it. Coming to the ring with a more grandiose entrance, putting the spotlight fittingly on him. He even gave the title a redesign with a white strap that really made it stand out.

Over the next several months, he would defend the title against handpicked opponents all the while taking exception to anyone who didn’t acknowledge his reign. He lived up to his name of “Mr Impact Wrestling”, being more of a presence on TV than then absentee champion Tessa Blanchard.

His program with EC3 managed to be one of the most interesting storylines without a punch needing to be thrown. We followed Moose’s journey to get back the title that EC3 stole. Moose cared about the title so by proxy the audience cared about it, too. Their match at Bound for Glory was a fresh take on the cinematic match having no ref and feeling more like an underground fight. EC3 sacrificed himself so that Moose could become what he felt was the real Moose. In the weeks that followed Moose became more serious, more aggressive and was focused on taking the Impact world title.

Rich Swann had a great journey towards the title, but after Bound for Glory, he hasn’t felt like a world champion. He suffers from a similar issue that Kofi Kingston faced while WWE Champion: on his road to the title, he found the balance between fun loving and serious but couldn’t while champion.

He was also hindered by the fact that as champion he hasn’t had a storyline anywhere near the quality of his road to the title. Not that the matches against Sami Callihan & Chris Bey weren’t great but they were just generic matches. The Sami feud was dependent on you remembering their feud 2 years ago and it felt like they did the bare minimum for Bey.

Now despite promising Moose a shot, he’s set to defend against Tommy Dreamer at No Surrender. Not the most tantalising match as while Dreamer is a legend, he’s not been able to compete in anything but over-gimmicked old school rules matches.

Swann manages to be overshadowed by Moose despite Moose’s title no longer being recognised. Not a great look for Swann as the world champion is supposed to be the face of the company. Moose’s contract is set to expire in June so if they’re finally going to pull the trigger now is the time. If he feels like Impact aren’t capitalize on his current momentum he may decide to look elsewhere. That’s something Impact can’t allow right now having already lost Ethan Page and Taya Valkyrie.

Just watching the Hard to Kill main event proved he should be the face of Impact as he managed to hold off Omega and the Good Brothers by himself. A man of his size shouldn’t be able to hit a Spanish fly the way he did. He easily fought out of the one-winged angel meaning he could beat Omega without compromising the most protected finisher in wrestling today.

He feels like a natural leader for Impact. Omega teased going after the Impact title when he first appeared, so if this happened then Moose feels like the natural fit to get the title back. Having Omega appearing on Dynamite with the title only to be confronted by Moose creates some real buzz for Impact. I’d be more likely to tune into a PPV main evented by Omega vs Moose rather than Omega vs Swann. I’d have a hard time buying that Swann could beat Omega after he already got pinned at Hard to Kill.

Omega is still seen as one of the best wrestlers in the world and Moose getting the win over him would be huge. Then Moose can reign over as the champion demanding everyone thank him for bringing back their title. It would also be a natural end to the TNA world title.

He’s brought a lot of prestige to a retired championship, just imagine what he could do for the Impact World title.

READ NEXT: Is the AEW-Impact Partnership Mutually Beneficial?