I remember once reading an analysis of the cult comedy-horror series Garth Marenghi’s Darkplace which attributed its mainstream failure to the fact of it being ‘a parody of a kind of show that didn’t exist on British television’. You could be forgiven for thinking it is actively drawing from Stephen King’s Kingdom Hospital, although this actually premièred one day before Darkplace’s final episode. So Darkplace itself comes very close to what Jean Baudrillard called a pure simulacrum, where the work is a copy of something which never existed in the first place.

The tension between reality and simulation hovers under the surface of Mindhorn throughout. Much like Darkplace, the plot leans on a fictional ‘80s TV show that does its best to parody ‘80s TV as a whole. Mindhorn is a hotshot detective with a robotic eye that allows him to see the truth – he drives a Miami Vice-style flash car and wears a Burt Reynolds-style moustache. Unlike Darkplace, though, Mindhorn is also drawing on a very specifically British concept, that of the regional detective drama (the region here being the Isle of Man, and naturally it is fraught with dark secrets).

Whereas Darkplace had the fictional show as the meat of the work, with only brief interviews with the ‘cast’ taking place in the modern day, Mindhorn leaves the eponymous show in the background. We get one initial flash of behind-the-scenes action, a short primer on its cultural reception, and then we are squarely in the present, following its now thoroughly washed-up lead actor, Richard Thorncroft (Julian Barratt). The inciting incident is basically what you’d expect in a movie revival of the Mindhorn series – and in a way, that’s very much what the film is – Thorncroft is called out of semi-retirement for one last job, in this case negotiating with a murderer who refuses to talk to anyone other than the Mindhorn character. 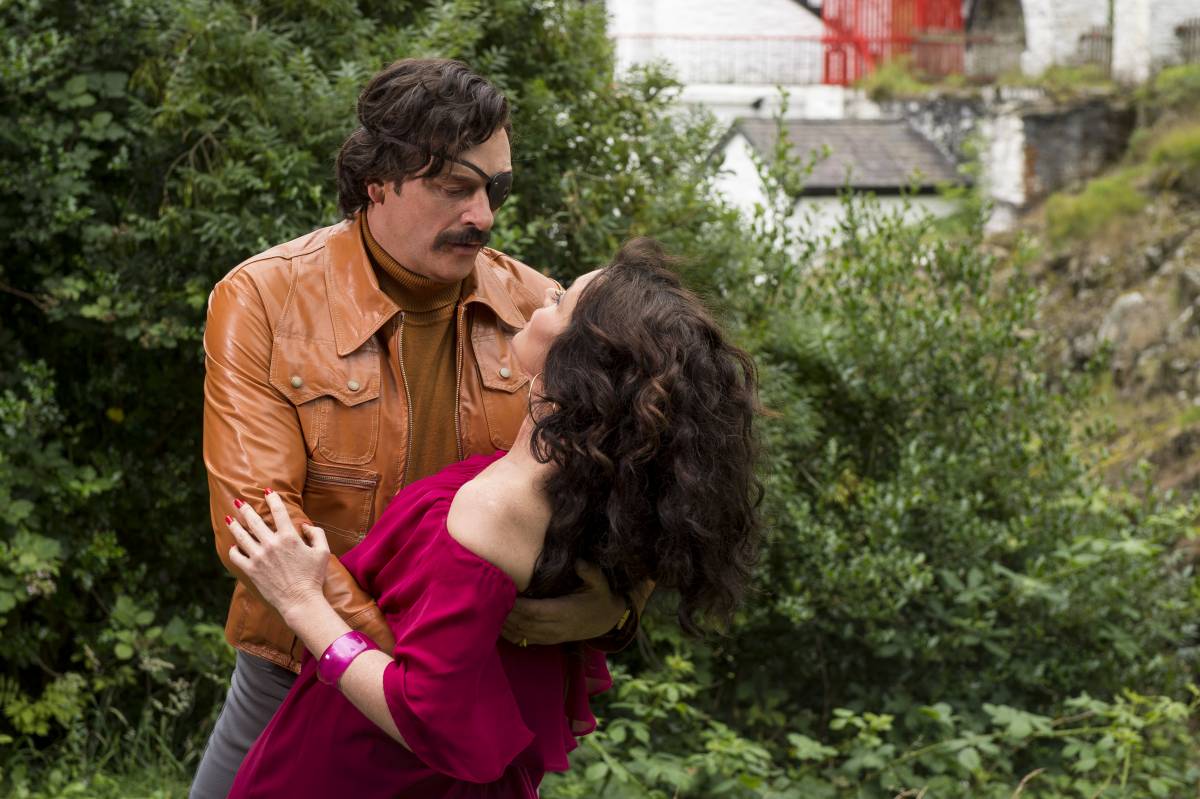 Initially, you might feel as if the film should have made more of its fictional background, that we should have been treated to a decent chunk of the Mindhorn show, but as you’ll realise, for all intents and purposes it very quickly becomes a full-blown episode of Mindhorn, and a feature-length one at that. Which plays seamlessly into this stuff about simulation: there are moments at which the police believe that Thorncroft’s mind has snapped, and he, like the killer, believes himself to be Mindhorn – but then, that’s why they brought him in in the first place.

Indeed, the parts of the film where Thorncroft isn’t actively playing the part of Mindhorn are some of the darkest, a portrait of failure that at times has shades of Barratt’s role as suicidal dad of a dysfunctional family in Flowers, or even his much earlier work in Nathan Barley, where he was the only sane man in the tempest of the then-rising internet media. When he is being Mindhorn, on the other hand, it is suddenly filmed in bright ‘80s technicolour. This interplay between fictional reality, and fictional fiction, reaches a height of wonderful absurdity when Thorncroft – dressed in full Mindhorn costume – crash-lands in a Mindhorn nostalgia event while pursued by an antagonist, and the event announcer dryly narrates with exclamations like ‘and here comes the baddy’.

The film could have been easily stretched from ninety minutes to the full two hours – several of the secondary characters, such as the mayor (Nicholas Farrell), and Steve Coogan’s character, Thorncroft’s acting rival Peter Eastman, weren’t afforded nearly the exploration their roles deserved. Even Essie Davies’s female lead/love interest Patricia Deville is a little flat, largely someone for Thorncroft to bounce off. This is forgivable, it is after all very much Mindhorn’s story, but I suspect that as with Hot Fuzz, another film full of self-awareness and meta moments, there will be enough deleted scenes to form entire subplots, even if these have been consigned to the cutting room floor. Eastman’s one big scene, though, involves Thorncroft getting into an argument with him at his too-glossy club and declaring – what else? – that ‘none of this is real!’, only to have to sheepishly admit the flowers he has just torn up are indeed real. 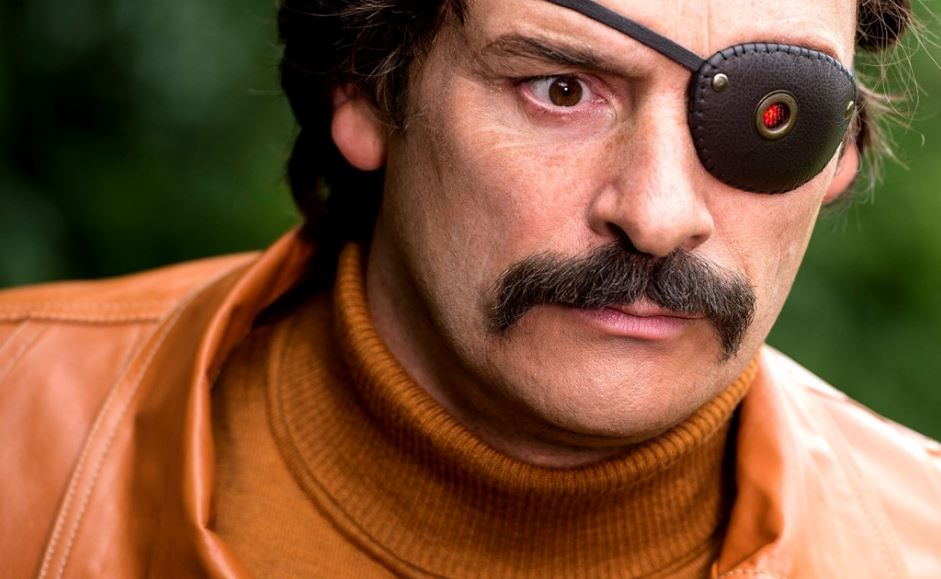 Not all the supporting cast are quite so ethereal, though – Russell Tovey paints a marvellous picture of an obsessive, deranged fanboy. Richard McCabe plays Thorncroft’s grimy PR man, and even if he’s a one-note character, what a note it is. David Schofield’s local chief inspector can serve as straight man to some smutty running gags while at the same time having enough presence that you can be pretty sure that the mayor’s riding his ass. Even Kenneth Branagh’s lovely little cameos know straightforwardly what they’re doing and do it.

Speaking of Steve Coogan, though, there’s plenty of comparisons to be drawn there. Coogan is far and away best known for the fictional sports-reporter character Alan Partridge, whose recent feature film Alan Partridge: Alpha Papa

involves a plot strikingly similar to Mindhorn – an unsuccessful, and personally fairly unpleasant, media personality being unexpectedly swept up in a tense life-or-death situation, which they’re quick to try and wangle into a bit of attention from the news. Coogan never gets the lines between him and Partridge blurred in the same way as Thorncroft and Mindhorn, even in spite of making public appearances in-character, but you can never quite be sure how much one is influencing the other – if you’re not familiar with Partridge, imagine the same situation as Leonard Nimoy’s confusing autobiographical works ‘I Am Not Spock’ and ‘I Am Spock’, without even the distinction of pointy ears.

Mindhorn is a comedy, both in the sense that it contains jokes and the classical sense of having a happy ending, but make no mistake, it has some dark edges. They’re not overwhelming – the opposite, if anything – but they’re there. Thorncroft hitting rock bottom is done with a light touch, but it’s still uncomfortable, still close to the nerve for anyone who’s ever worried about botching their career. 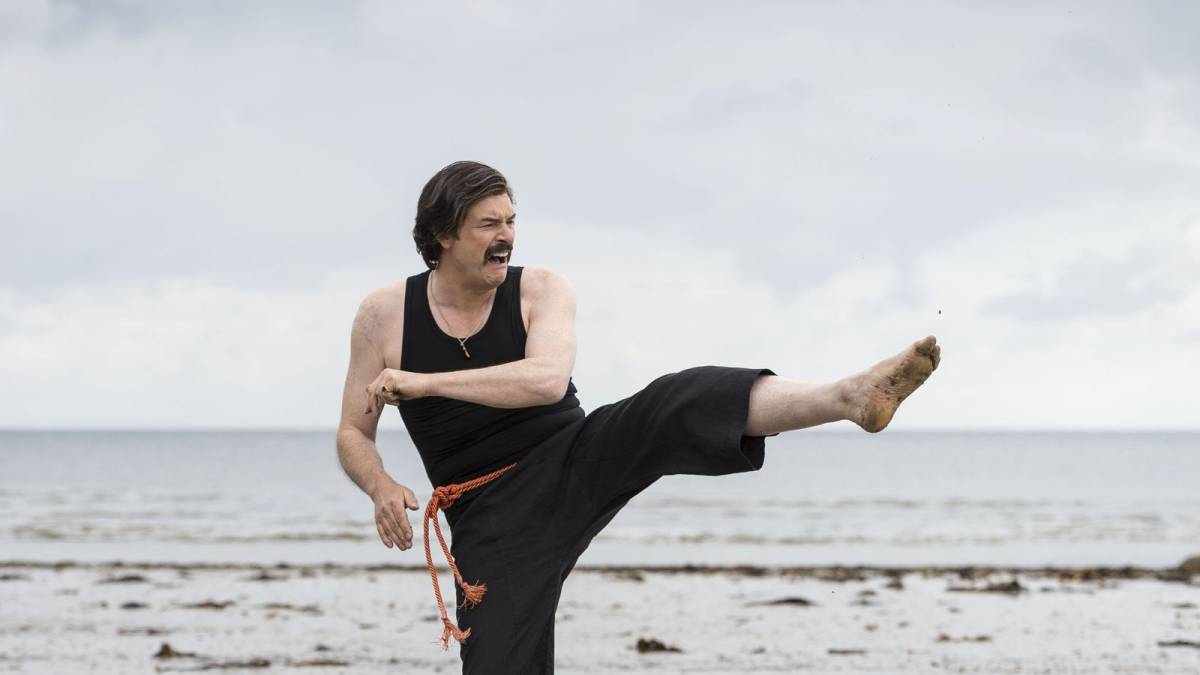 One of the major subplots concerns the exact parentage of Deville’s daughter, Jasmine – Deville is in a long-term relationship with Thorncroft’s former stuntman after their own marriage fell apart, so the natural assumption is that Jasmine is his, but you know in a film like this it’s not going to be that simple (it wouldn’t have been funny, for one thing). There’s the tragic aspect of the killer being mentally ill enough to honestly believe that Mindhorn – robotic eye and all – was and is a real detective. And there’s one genuinely eerie moment very early on, when the police have bust into the killer’s hideout (plastered, naturally, with cash-in Mindhorn merchandise) and the phone rings – after the requisite tense pause to steel themselves, they lift the receiver, only to have it fall apart in their hand, discovering it is made of plasticine. What you might have thought to be real and solid and dependable very suddenly isn’t – or, as the original assassin said, ‘nothing is real’. At the climax, there’s a couple of bits of trickery involving a prop gun loaded with blanks – Thorncroft eventually foils the baddy using Mindhorn’s trademark martial art ‘jinga’ and confidently states he was never in any real danger, only to discover that it was a real gun and immediately faint, still hovering in the fantasy realm and ultimately unable to cope with the real.

Deconstruction in fiction probably hit its zenith with Alan Moore’s superhero comic series Watchmen, the overriding message of which was that people who dress up in spandex and fight crime probably have some very serious neuroses (behind the mask, as it were). These days what seems to be in, in a direct reaction to that, is reconstruction – think the chumminess of the Avengers films, very consciously harking back to the days of superheroes as friendly blokes from round the neighbourhood.Mindhornstarts off very obviously deconstructed – as I say, it opens not with an actual sequence from the show Mindhorn, but with a glimpse of the behind-the-scenes proceedings. But from there, the film – and Thorncroft himself – manage, through struggle and toil, to reconstruct the Mindhorn identity.

This, really, is why the narrative becoming an episode of Mindhorn works. It is not just a self-consciously ridiculous time capsule as Darkplace was, it carries genuine stakes and tension. I watched Mindhorn the film and would have watched Mindhorn the series – which seems like the highest compliment possible.