Sweden's tourism income is gonna take a hit after this one. 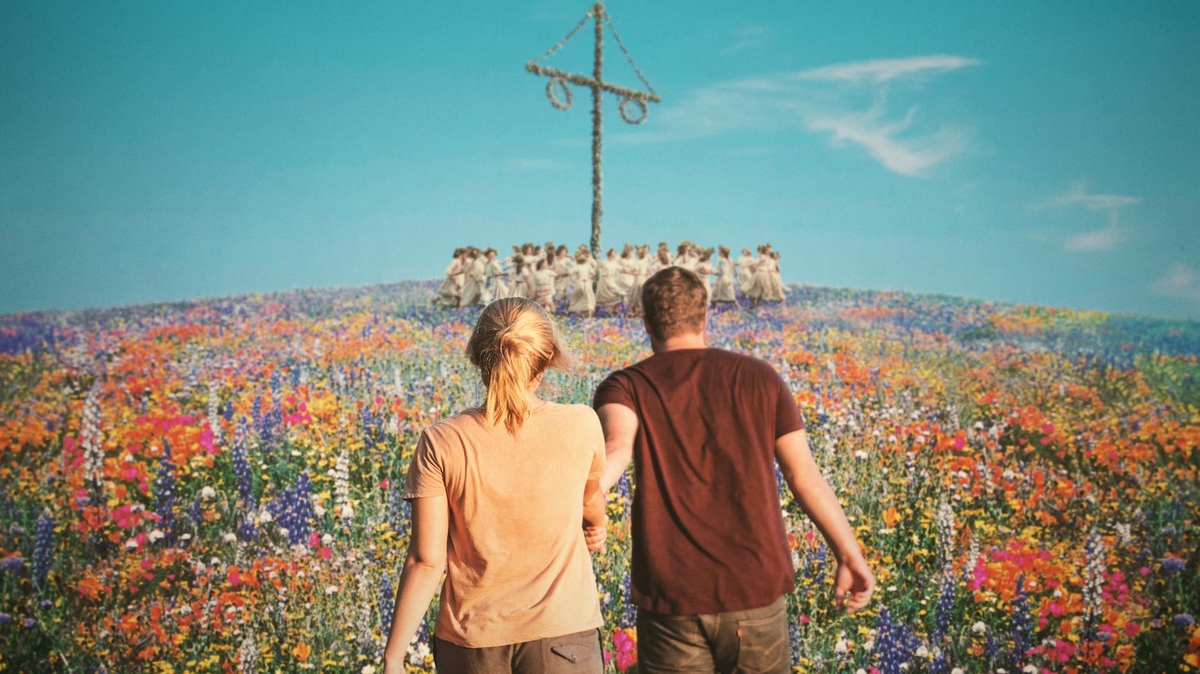 If Hereditary was a shadowy metaphor for the repression of grief, Midsommar is very much an illuminating explosion of it. Leaving behind the dark and claustrophobic confines of his debut film, Ari Aster explores the shockingly disturbing sun-scorched meadows of Midsommar.

Still reeling with immense grief after suffering a profound tragedy, Dani (Florence Pugh) is reluctantly invited by her inattentive boyfriend Christian (Jack Reynor) to join him and his friends on a trip to Sweden. Christian’s friend Pelle (Vilhelm Blomgren) informs them that they’ll be visiting his family for a nine-day festivity which only occurs once every 90 years. From the outset, it’s clear that Dani and Christian’s relationship is a constant source of tension, one consisting of two people moving away from one another, though neither willing to admit it.

While initially hesitant, once they arrive, Dani is put at ease by the beauty of Pelle’s people’s pagan way of life. Children run playfully through the fields as adults gather to welcome the others. Lovely music plays softly in the distance, while the guests take in the luscious green wilderness that expands as far as the eye can see. This is the enchanting, disturbing beauty that Aster has created. A world that at face value is disarmingly gorgeous, making it even more shocking when things begin to go to hell.

While I found Hereditary terrifying, I would hesitate to describe Midsommar as such. It has its share of gruesome imagery, but its more grounded nature focuses on the horrors and emotions of man. It is one of the most starkly disturbing and depressing horror films I have seen in a very long time. The opening ten minutes are a gut punch of raw emotional grief that stuck with me throughout. It made me want to go home and hug my family. And that’s precisely what I did. Aster’s ability to introduce, understand, explore, and quickly invest the audience in its characters is truly an achievement in and of itself.

Simply put, Pugh is phenomenal. Her gut-wrenching seesawing of emotions is imparted early on, making her a vulnerably sympathetic protagonist. Between her contending with a deteriorating relationship, crippling grief, and a pagan cult, she is very much a powder keg of raw, volatile emotions. And when she explodes, the catharsis of Aster’s deranged imagery complements her anguish. The film’s daylight setting serves as a defining contrast to the dark personal depths Aster’s characters will take us, making it all the more jarring.

Given how tonally heavy the movie is most of the time, there is a more than welcome amount of comedic relief. Primarily, Poulter’s culturally ignorant stoner character Mark, who provides laughs at both his and the pagan community’s expense. In addition to serving as “the ugly American tourist,” these laughs allow us to reside within Aster’s disturbing world without losing our sanity. This frequent use of comic relief is the biggest surprise of Midsommar, and while it is leaps and bounds away from resembling a horror-comedy, its dark humor is used to alleviate the constant tension and heartbreak.

As is usually the case, the less you know about its plot, the more affecting an experience it will be. Few other directors can produce and retain such disturbing sun-soaked imagery as well as Aster. The film’s Wizard of Oz Lollipop Guild from hell aesthetic is a gorgeously enthralling approach to horror that you can’t look away from. Bursting with brightly colored flower crowns, gorgeously stitched linens, and mystifying runic scripture, Aster creates a mysterious and beautiful world ripe for dread.

There’s a bouncy, music-like quality to the film’s pace as it jumps from plot point to plot point. This works in perfect accompaniment to the film’s numerous euphoric pagan dance and musical numbers. These scenes are pristinely choreographed and beautifully presented with a synchronicity to its enchanting score by Bobby Krlic (AKA The Haxan Cloak). Contrasting these trancelike movements with their hidden intentions makes them all the more disturbing.

The audience is given many clues as to exactly what the horror is that’s coming. It’s laid out early on, and continues to string us along to its gruesome conclusion. You can’t shake the morbid curiosity of Aster’s films. The anticipation of something genuinely shocking is right around the corner, and you’ll be damned if you won’t stick around to scratch that itch. However, getting to that itch will be a lengthy wait, as his sophomore film is also his longest. While the first two acts have solid pacing, the final act feels about 15 minutes too long.

Deciding to have your pagan folk horror story unfold amongst a vibrant summer solstice setting is a bold move, given the lack of shadows for the horrors to hide within. A lack of shadows requires Aster to expand upon his repertoire of telling unsettling personal stories within a unique setting. His penchant for putting characters through mental and physical anguish to better understand how we process emotional pain remains and is central to Midsommar. While some of the scares are lost within the sunshine, Midsommar is filled with gorgeous yet disturbing visuals I cannot shake, and some I wish I could.

Verdict
Don’t be fooled by its gorgeous sun-scorched scenery, Midsommar is here to ruin your relationship
8
Cultured Vultures is a pop culture website established in 2013 covering all things gaming, movies, and more. We eat your words.
All The News On The Biggest Games