Sure, he has the iconic line - but the truly memorable moment is when Inigo Montoya finally gets his revenge. 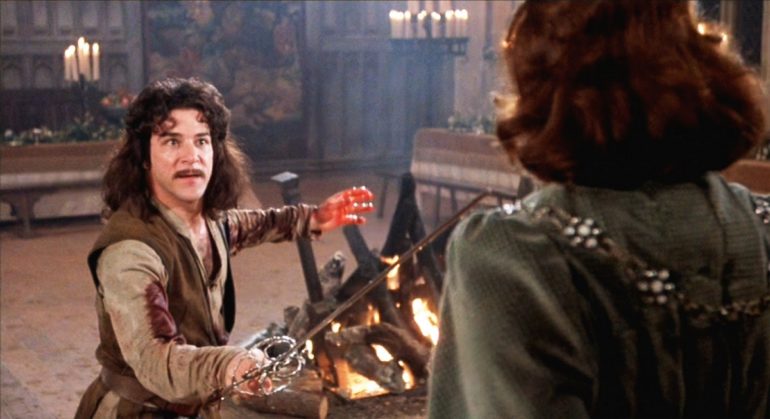 Hello. My name is Inigo Montoya. You killed my father. Prepare to die.

The chances are that if you know anything about the cult classic film The Princess Bride, it is probably this iconic line. We hear it enough throughout the movie, after all. Inigo repeats it to anyone who will listen, this speech he has planned for the day he meets the Six-Fingered Man, the one who did indeed kill his father. And he gets to say it to the Six-Fingered Man too, as he gets the revenge he has been craving all of his life.

At first glance though, Inigo and his personal mission are a secondary plot in the movie, which follows Princess Buttercup and her childhood lost love, Westley, in their quest to be together even as she is supposed to be marrying the dastardly Prince Humperdinck. Inigo, along with Fezzig, fall in with Westley and help him to liberate Buttercup (after some initial hostility, which results in one of the best swordfights ever put onto the screen). What brings the storylines together is that the Six-Fingered Man works, conveniently, for Prince Humperdinck, so every step towards Buttercup is a step towards Inigo’s goals as well.

The Princess Bride is a gloriously silly film, with its tongue firmly in its cheek at all times, and all of the characters are gloriously silly as well. All of them, that is, apart from Inigo. He holds his own as a character for sure, and comes out with some great lines – ‘You keep saying that word. I do not think it means what you think it means’ – but there is a thread of seriousness that runs through him that isn’t really there in any of the others. He is out for his revenge and nothing is going to stop him from getting it.

Mandy Patinkin, who plays Inigo, tends to bring a lot of gravitas to the roles he plays and I don’t think it was a coincidence that he was cast in this movie, for this role. There is a depth to him as an actor that goes beyond the pure comedy that is The Princess Bride, and the revenge scenes are never played for the laugh. Indeed, Patinkin has said since the film came out in the eighties that he was thinking of his own father’s death when he was filming his scenes, and how it was as though he was taking revenge on the cancer that killed him through playing out Inigo’s quest.

But while the ‘Prepare to die’ line is iconic, I believe the truly memorable moment is when Inigo does have the Six-Fingered Man cornered at last. The heroes have tricked their way into the castle when Inigo runs across his old enemy, who escapes from him. Inigo can’t knock the door down and throws himself against it, shrieking for Fezzig to come and get it open. He is out of control, so close to completing his mission, when until now he has been calm and calculated.

When he catches the Six-Fingered Man – Count Rugen – Rugen hurls a knife at him, and Inigo is seriously injured. Rugen taunts him – he is a bad guy – and goes in for an easy kill. But Inigo fights him, his sword doing the work that he is too weak for, and all the while he is repeating his line – ‘Hello. My name is Inigo Montoya. You killed my father. Prepare to die!’. Rugen offers him money and power, ‘anything you want’. And Inigo replies with a line that I think is so perfect, you know that he has been planning it just as long as he has been saying the other one:

I want my father back, you son of a bitch.

He kills Rugen, in cold blood, and walks out of the castle with his head held high. We have been on a journey with Inigo that could not have resulted in anything else, and we are alright with it, however gruesome. And although Westley is, in the meantime, saving Buttercup from Humperdinck, the resolution of that storyline just isn’t quite as satisfying as the resolution of Inigo’s. It is a testament to the character and his story that in a film like this, the scene doesn’t seem out of place at all.