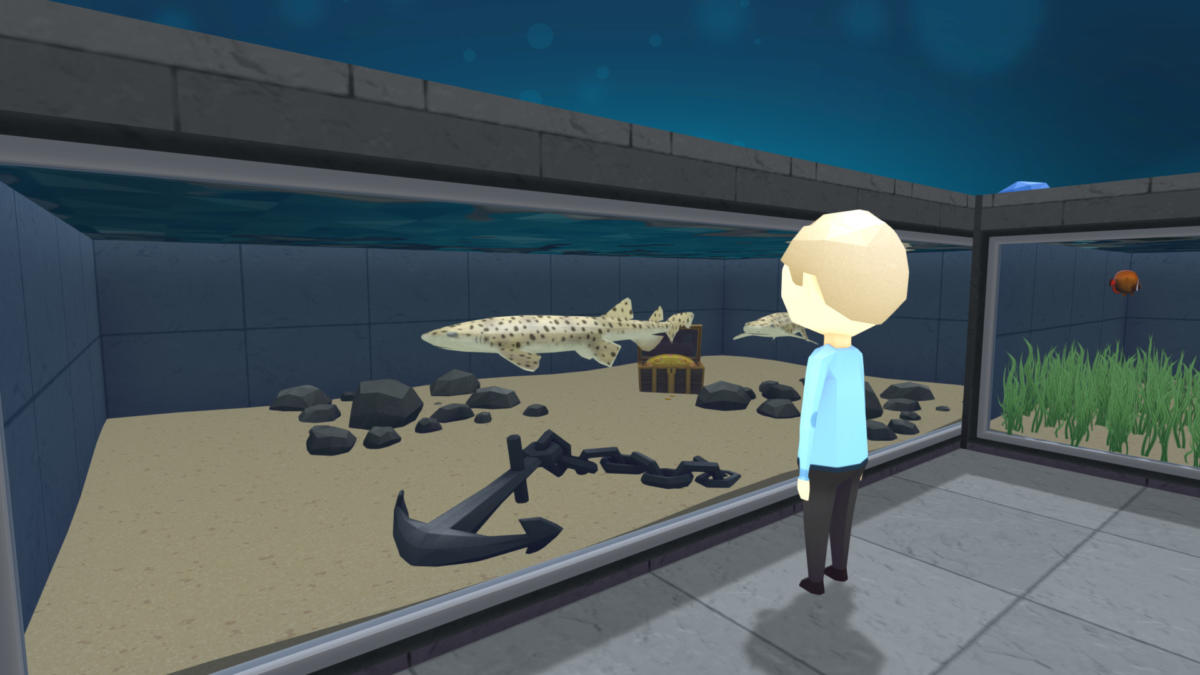 You’re given a small aquarium, and are tasked with improving it by meeting certain criteria. Meet all the criteria to finish the level, move onto next level. In that single sentence, I have entirely described Megaquarium. That sounds like a bad thing, but from recently playing Two Point Hospital, I know that when it comes to tycoon games, simplicity is key. Well, at least initially. 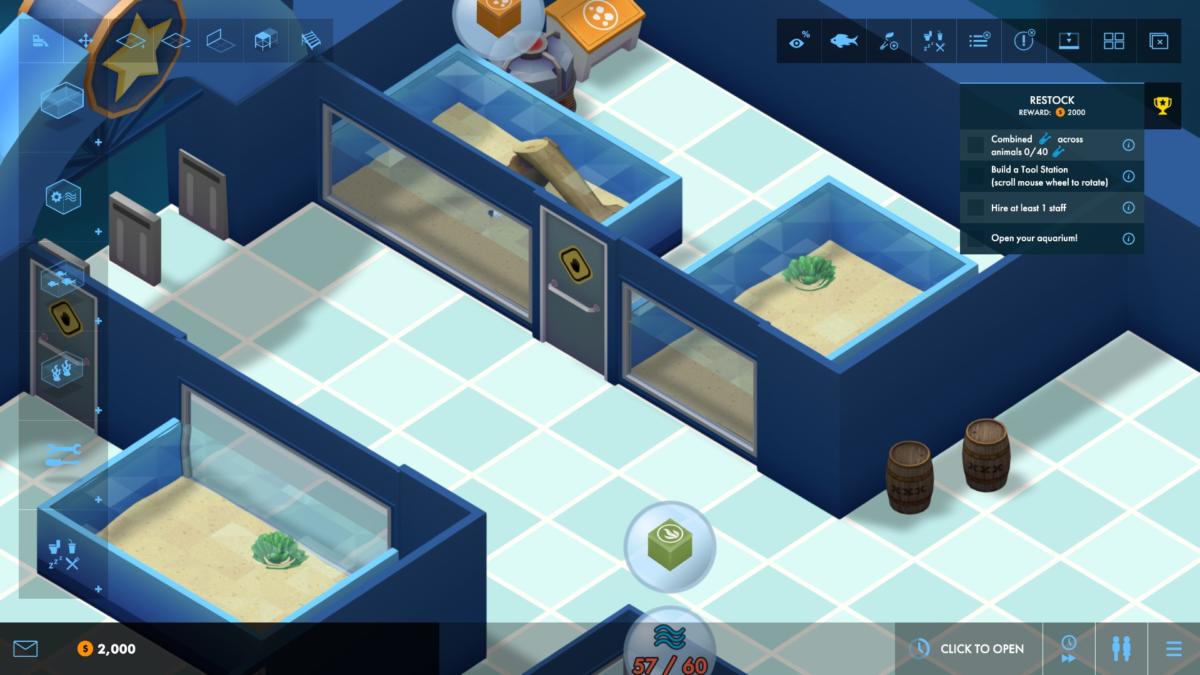 As you’d imagine, Megaquarium has you building an aquarium. You’re in charge of building tanks, feeders, filters and heating as well as hiring staff. Oh, and you also need fish! The water-dwelling beings each have their own likes and dislikes, and part of the game is building a habitat especially for them. In this respect, the game reminded me a little of the original Zoo Tycoon.

The actual act of building isvery self-explanatory, and the game is rather intuitive– seasoned tycoon gamers will pick this game up very easily indeed. I felt that for me, the tutorial wasn’t necessary at all, and that is the sign of a game which has made its UI so easy to navigate, that I just discovered what everything does for itself. If I’m not sure what to do for meeting a criteria, there is an (i) symbol, which when clicked tells you what to do to achieve this task. 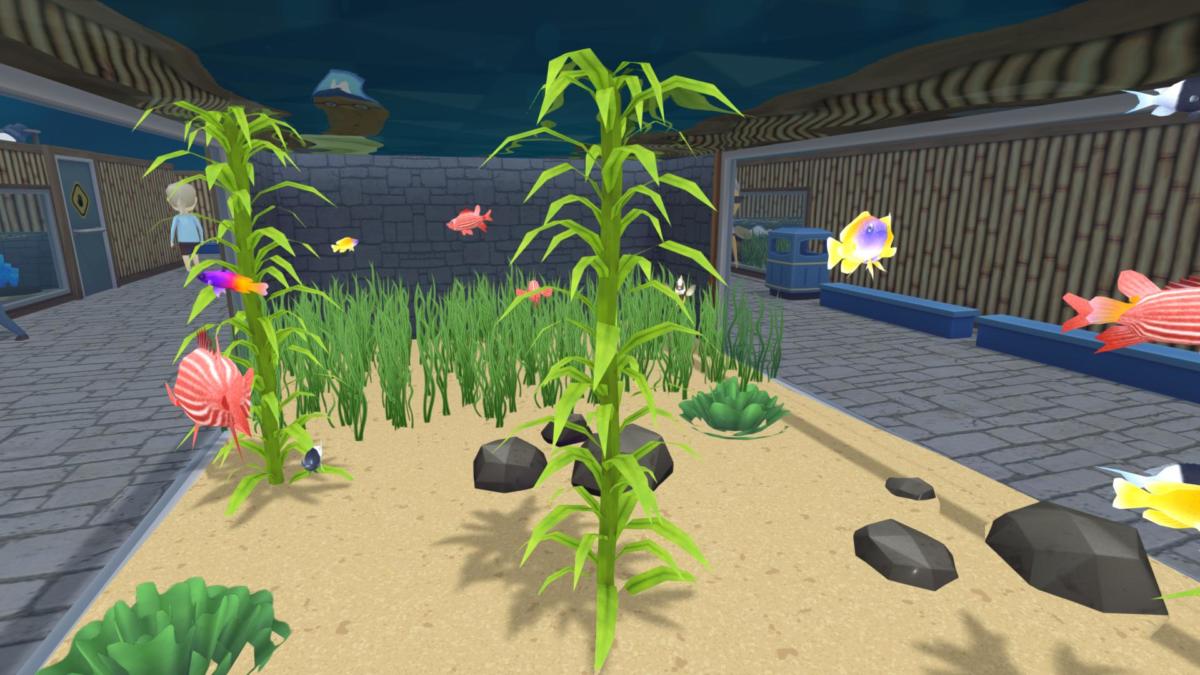 The game isn’t difficult at all, at least in the traditional sense, which is great to get you into the game, but further in, I felt that I’d have liked a bit more of a challenge. Also the purchasing of fish can be a bit of a pain. As I mentioned, each fish has their own environmental requirements, but I struggled to work out what they were before I placed them in their tank. Which wasn’t really an issue because you can do this while the game is paused, but if you purchase fish and then realise halfway through developing your tank that you don’t have enough cash to finish it, it’s a case of deleting all improvements and selling the fish for the time being. A minor grumble, mind.

A slightly bigger annoyance is the AI. I’m not sure why, but when I tried to build while the game wasn’t paused, a visitor would always make a beeline into my staff only areas, meaning I’d have to catch and fish each one out. It’s not a game killer, but it happens most times, meaning I have to wait till I have enough money to build what I intend and pause the game to do so. The visitor AI just feels like they’re navigating the world in a semi-random fashion at times, wandering into random corners and down empty dead ends. 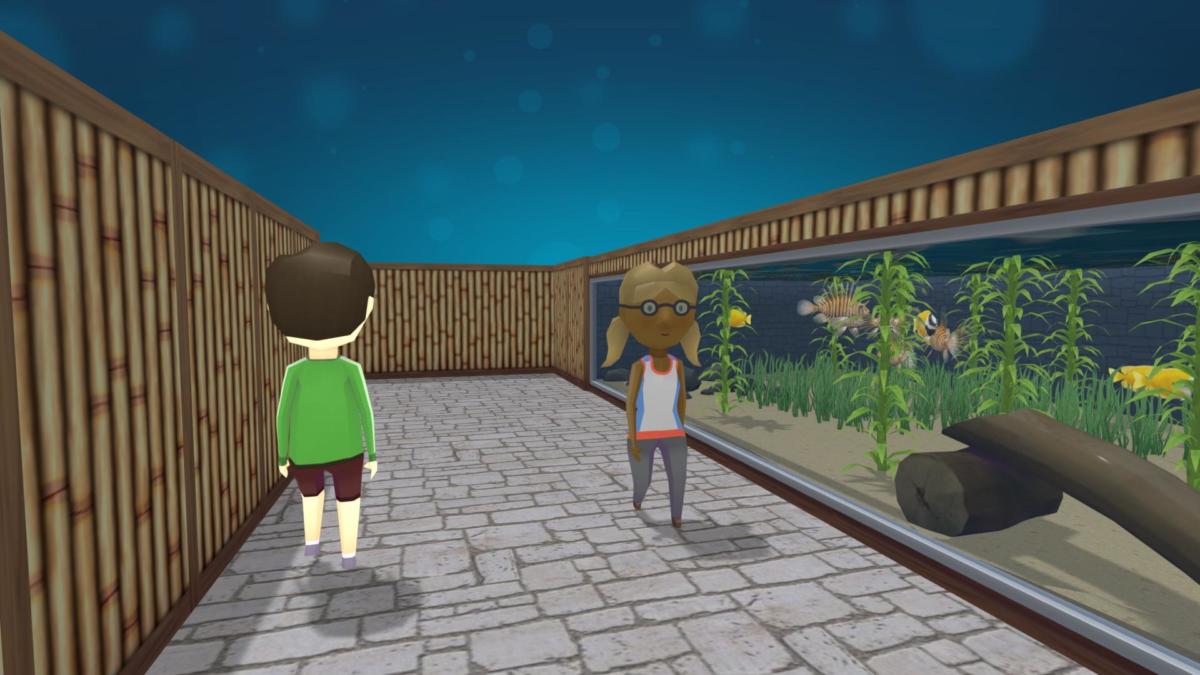 However, it is the staff AI that is the most annoying. Generally, I allowed the staff free roam around the aquarium so they could all help out where needed. Then I got messages that fish were dying, the staff simply were not feeding them. They do a task, finish it, do another, finish that, and if the original task needed doing again, they’d go back to that, meaning that certain tasks never get finished. It is possible to zone staff, like many other tycoon games, and that seems to get around the issue.

Another annoyance is that staff seem to rarely use the resources near a tank. So if a member of staff needs to fix a filter, they’ll pick up the closest tool box to them, and carry it across the level to the location that needs fixing, despite the fact there’s a tool box right next to the broken filter. This means that when they’re done fixing said filter, he’ll have to take up carrying the tool box back to its original location. A limit on the amount of staff that you can hire can make staffing difficult, meaning that the bigger my aquarium gets, the more running around the staff end up doing, and less work gets done. 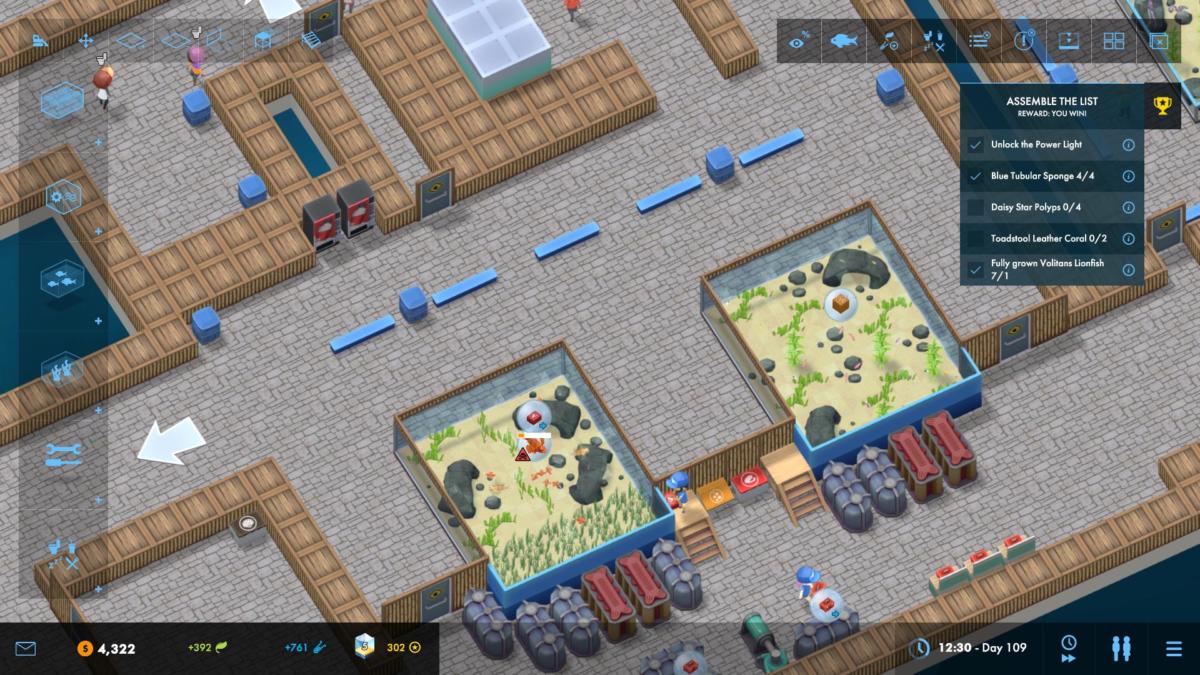 New items are unlocked after hitting research targets. You do this by accruing research points which are attached to certain animals. Select your next research item and it’ll unlock after you’ve achieved enough points in a feature which doesn’t interrupt the gameplay. The UI is simplistic and easy to work out, but some people might find it a little large and intrusive in 2018. As a fan of those older tycoon games, it really doesn’t bother me at all.

I think the main thing that I struggle with is the lack of reward. This isn’t an issue with Megaquarium per se, but an issue with certain games in the genre. Ever wonder why games like Theme Park and Theme Hospital seem to be held aloft above the likes of Zoo Tycoon and Marine Park Empire? In Theme Park, you build the park, and are rewarded with NPCs riding the rides. In Theme Hospital, you build the hospital and your reward is seeing the patients get healed. Megaquarium, Zoo Tycoon and Marine Park? People just come in and look around. That’s it, really.

As I say, that happens in a lot of tycoon games, and it doesn’t take anything away from the business management aspect of the game. In fact, I could see myself losing many hours to Megaquarium, but it doesn’t give you that little buzz when you see a tiny person enjoying looking at fish. Megaquarium is a cute game, its graphics are basic (they reminded me of Parkitect a lot) but serviceable, and its sound, well there isn’t much aside from a bit of music and sound effects, and they’re all fine.

Megaquarium is a nice builder-tycoon game that will entertain for hours, although it never feels too deep. It’s good, but a little unrewarding.