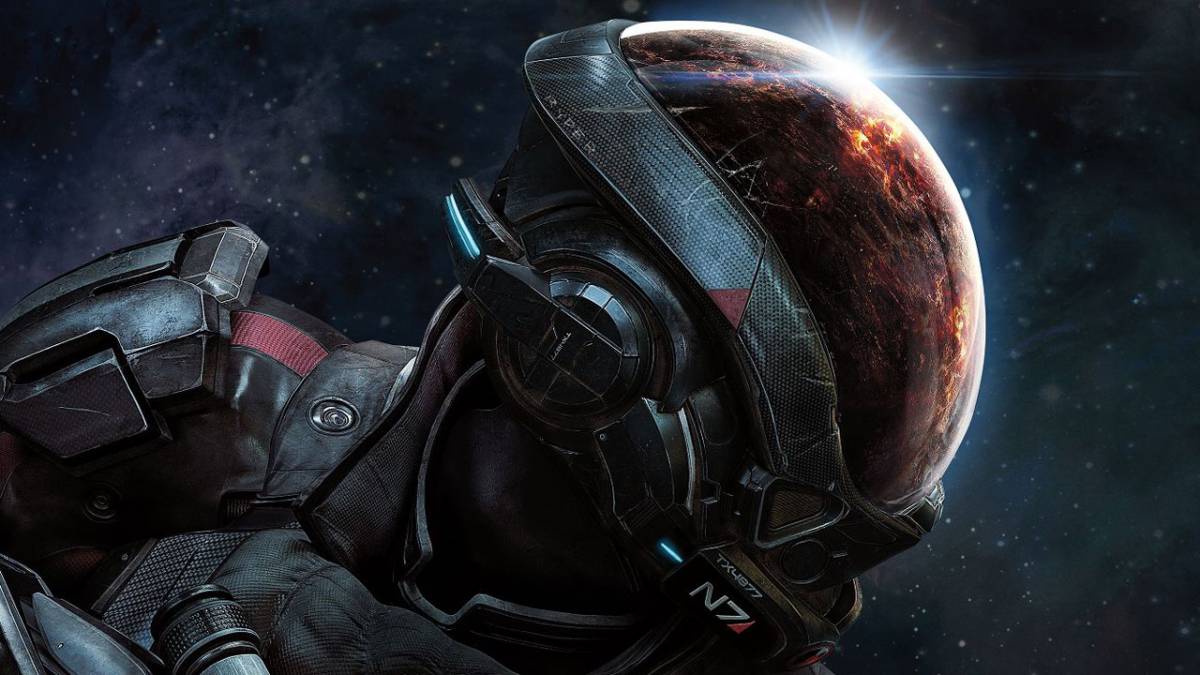 It’s been five long years since we waved goodbye to Commander Shepard and their motley crew in one of the most contentious endings in video game history. With a new cast of characters and wide-open galaxy to explore, does Mass Effect: Andromeda deliver and do enough to point the franchise in a promising direction?

The short answer is yes, but thanks to the many speed bumps, bad calls, and the pervading sense that the game has been hurried to shelves, it doesn’t help itself in finding its own path. 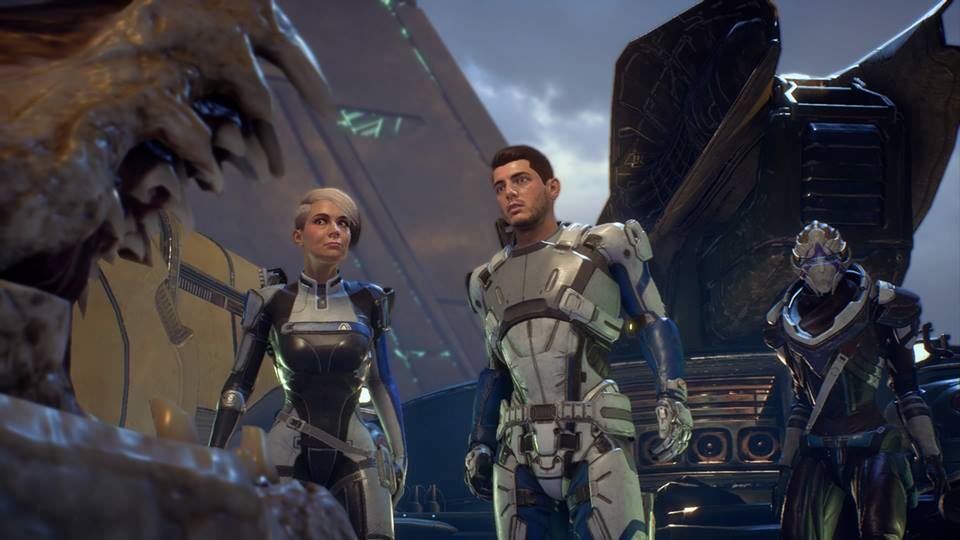 Andromeda follows the Ryders, led by a distant patriarch and his two children. Alec Ryder is the progenitor of “the Pathfinder”, whose quest is to colonise a new galaxy and make it a home for their respective species. The mission for humanity is soon handed to one of his children with the powerful AI SAM at their disposal. Before too long, you are entrusted with more and more responsibilities that weren’t in the job description – it’s up to you and the friends you pick up along the way to save everyone, whether it’s the cranky Krogans or erratic Salarians.

With the option of picking between two Ryders, Scott or Sara, I went for the former for reasons that may be obvious to anyone who’s been on YouTube within the last couple of weeks. While not as ghastly as some videos may depict her, there’s something just not quite right about the way Sara emotes, which is largely the case for the rest of the female inhabitants of Andromeda. Addison’s dead stare may slink into my dreams for the rest of my life.

It would be impossible to not talk about Andromeda’s controversial animations. It’s undeniable that they aren’t up to the caliber you would expect for a game that cost tens of millions of dollars to produce, especially one so long in the making. Andromeda’s animations are more The Technomancer than they are L.A. Noire. Within its first few hours, the game’s alien understanding of how faces work tries its best to take you out of the experience. That being said, while it still distracts on occasion, it’s something that you will get used to the more you play. After 30 hours of playtime with Andromeda, its janky animations faded into the background but were always there for me. How you deal with it will probably affect your enjoyment of the game; it will doubtlessly be a dealbreaker for many.

After a stuttering opening sequence, Andromeda wastes no time in peeling back the curtain and allowing you to delve into its many playgrounds. The planets it has to offer are varied, from icy and unwelcoming landscapes to desert lands which seem inhospitable. The Pathfinder’s crusade to make these planets livable for all is determined by unlocking abandoned vaults of the Remnant, who are shrouded in mystery and no longer anywhere to be seen in Andromeda. By slogging through (and it is a slog) various puzzles and clunky platforming, the viability of a planet increases, which allows an outpost to be cultivated. It’s difficult to imagine how else Bioware could have approached the “unlocking” of a planet, but the often frustrating search for monoliths acts as a deterrent to the player. Instead of being the Columbus in a shiny suit of space armour that I hoped I would be, I found myself actively avoiding finding new homes for humanity. 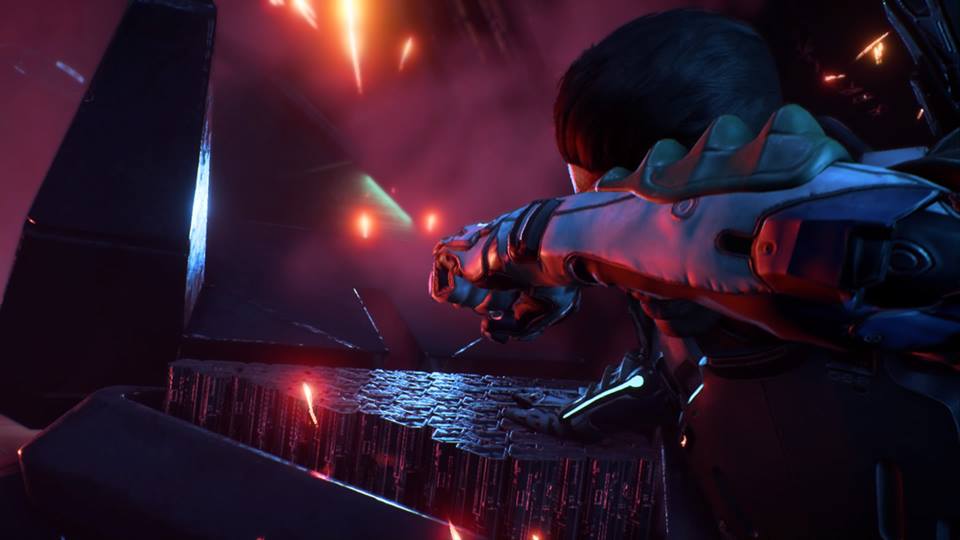 Luckily, the main story of Andromeda doesn’t ask you to do it all that often; just once as an obligation. The rest revolves around the dangers of the Kett: a violent race hellbent on destroying or “exalting” everything in their path. They are led by the Archon, who seems to have graduated from the MCU school of villainy. He never feels like a genuine threat, his dialogue laced with cliches and malicious intentions falling flat. He acts as a stepping stone, a placeholder villain, much in the same vein as Marvel’s cinematic bad guys. It’s a similar story for the Kett themselves. They’re boring cannon fodder, forgettably designed and lacking variety.

How you take them on, however, is one of the brightest spots of Andromeda. The combat is better than in any other Mass Effect game, offering more ways to murder your way through the galaxy than ever before. For each battle, there’s a strategy and selection of “powers” to see through the day. Preferring a blend of biotics and outright destruction, my Ryder almost rampaged through all opposition in his path, using Flak Cannon and Concussive Shot to take down the big guys and Backlash to shield against fire before getting up close and taking them out with melee attacks. It almost always felt cinematic, like I was the unfamiliar gunslinger walking through the swinging doors of a saloon.

There’s a playstyle for everyone, which is helped by Ryder being able to switch profiles on the fly. These let you boost stats and even gift traits specific to that profile. For instance, Explorer allows Ryder to dodge more effectively and attack elevated enemies more effectively. Elsewhere, Vanguards can restores shields with melee attacks and Engineers have a drone at their disposal. It’s a real joy to change tact on the fly, though it’s a shame that the cover system doesn’t always impress. Ryder automatically hugs walls and barricades when in combat, but it doesn’t always work and leaves you exposed; more fine-tuning was necessary.

You’re aided in combat by two companions from aboard the Tempest: Andromeda’s version of the Normandy. It feels unfair to compare the new bunch of misfits to the one found in the original trilogy as their stories are only just beginning, but nobody stands out quite like Garrus or Tali. Jaal comes the closest in my eyes, an emotional, badass Angaran, who are Andromeda’s new race. Funnily, he seems to be the most human person on the ship, infinitely more likeable than the often exhausting Scott Ryder and his unending sarcasm. Shepard felt like a blank slate, someone whose personality you could make your own. Scott, on the other hand, is just a bit of a dick. 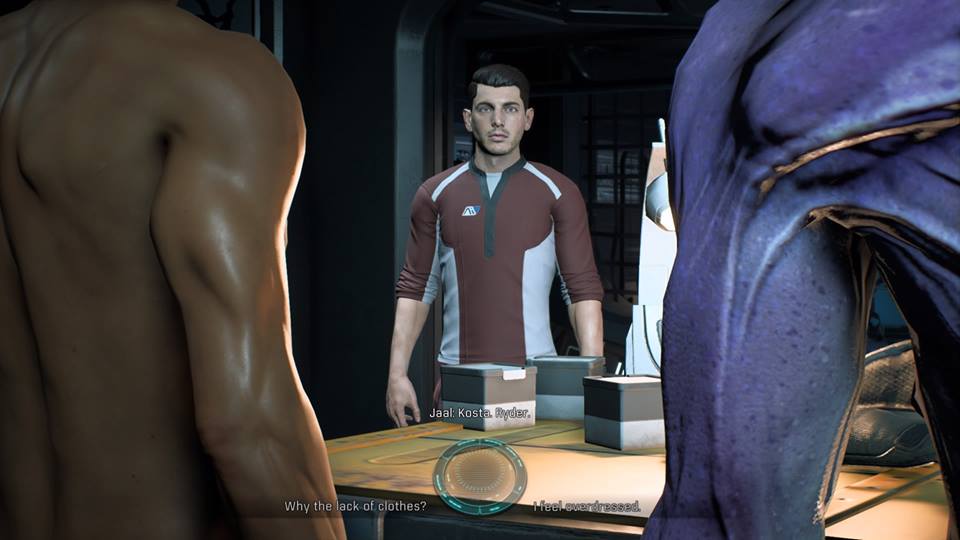 He’s always cracking jokes, which was easy to ignore for the game’s first few hours, but as time went on, it just became wearing. The sardonic protagonist is all the rage right now, a hero who doesn’t take anything too seriously. It’s worked wonders for other franchises -Uncharted, for one- and it’s mostly down to good writing. Andromeda’s writing, however, is serviceable at best, embarrassing at worst. Most conversations have all the well-worn tropes of sci-fi vernacular, which is made worse by how different dialogue is when compared to the choices available. At one point, after selecting something along the lines of “back off”, Scott instead decided to tell someone that he was going to “fuck their shit up”. It’s a common complaint many players of Fallout 4 had and clearly BioWare didn’t learn Bethesda’s harsh lesson.

Despite that, I was still able to indulge in one of my favourite hobbies from the Mass Effects of yesteryear: bending the ears off of my crew. There was something about finding out everything I can about the people I travel through space with that has has always enthralled me, and it’s the same here. Discovering what makes Cora (who ended up being my romantic choice – vanilla, I know) so untrusting or how Jaal responds to the adversity he and his people face was fascinating, patchy writing be damned. Even the sex scenes weren’t offensively bad and actually animated better than most of the rest of the game, bizarrely enough. 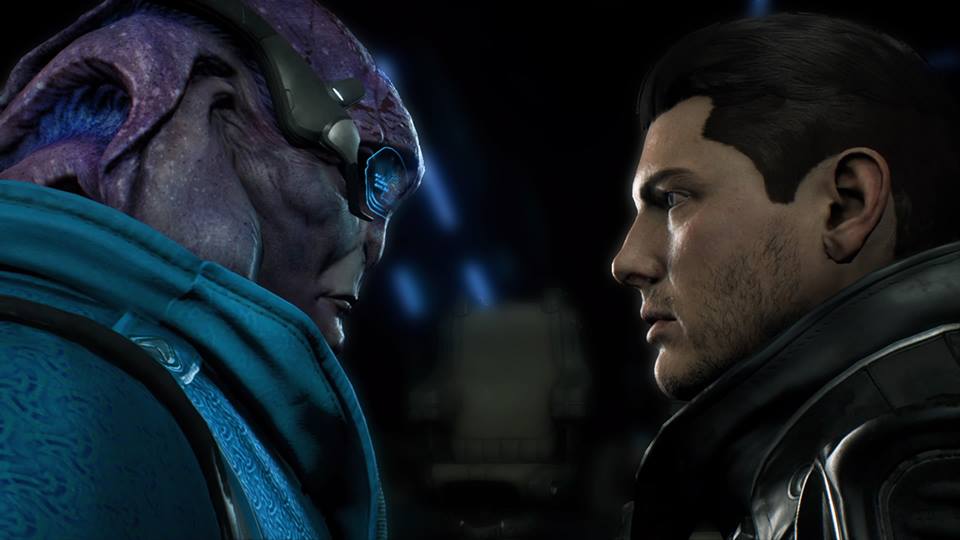 Speaking of patches, Andromeda needs more than a few to get it to the state where it needs to be. When its release date was announced, many fans were concerned that it was too soon. Sadly, the fears were well-founded as Andromeda plays like it needed a couple more months of work. As well as the notorious facial animations, the game has all the hallmarks of an open-world action RPG: glitches and bugs as far as the eye can see. None of the ones I encountered were game-breaking, rather immersion-breaking instead, which is almost as detrimental to the player’s enjoyment. The framerate, although not atrocious on console, does dip whenever the going gets tough. It all contributes to Andromeda feeling poorly optimised and as if it was pushed out of the door to hit a deadline.

However, with this much content (almost too much content), it’s no suprise that it isn’t squeaky clean. Andromeda is obsessed with giving you stuff to do and places to go to the extent that it’s like getting a new checklist each time you visit a new area. The quality of these sidequests and tasks varies dramatically. A fair few, particularly loyalty missions, are worthwhile and work well to establish the people of Andromeda. Unfortunately, for every great mission, there’s at least a dozen more that are pure fluff.

Go here, get that, bring it back – that’s the structure. This could be fine if exploration was more inviting, replicating the little ship on the Galaxy Map from previous Mass Effect games. Instead, Andromeda opts to give you a first-person view of every journey with tiresome transitions designed to mask loading times over and over again. If you’re like me, you will approach an NPC with an blue icon above their head like they have a disease before your time with Andromeda is up.

Despite all the quibbles and problems I kept bumping into with Mass Effect: Andromeda, I still couldn’t tear myself away from it. Its problems are plentiful, but ultimately not enough to make it a bad game. It comes close to actually being a great game, though it has to settle for just being good. In many ways, Andromeda reminds me of the original Mass Effect: a scrappy, tryhard adventure that found its voice on its next outing. Hopefully Bioware can learn from the mistakes they made here and take the franchise back to the stars where it belongs.

Verdict
Mass Effect: Andromeda presents a promising fresh start for the franchise that's held back by a myriad of technical and mechanical problems. It's a rough diamond that needs more polish, but if you can spare the time to get to its core, you might be pleasantly surprised.
7.5
Cultured Vultures is a pop culture website established in 2013 covering all things gaming, movies, and more. We eat your words.
All The News On The Biggest Games