MachiaVillain (PC) REVIEW – Not Quite A Graveyard Smash 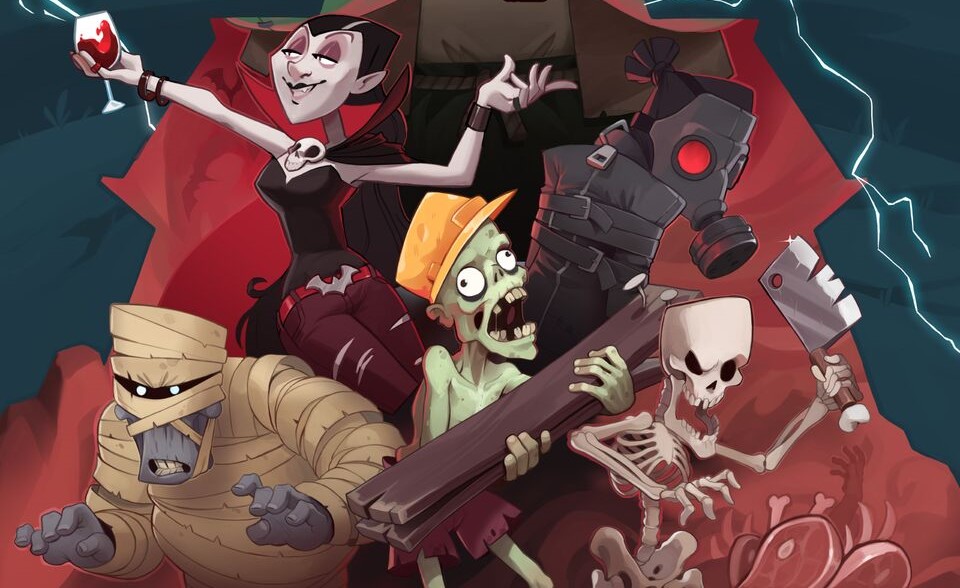 As a long-time fan of Dungeon Keeper and Rimworld, the aptly named monster mansion sim MachiaVillain seemed right up my alley. Making a monster mansion and murdering morons? Count me in.

The basic gameplay loop is the same as Dungeon Keeper. Collect resources to build a base, build rooms for your monsters, attract new monsters, research better stuff, repeat. Where it differs is that each monster eats a different type of food; blood, brains or meat and you need to balance that out to keep them healthy and happy. How do you attract these tasy teens, I hear you ask? Well you create ad campaigns telling gullible folk they’ve “won a set of 24 karat gold plates” or they’ve “inherited an old relative’s estate”. You then get one of your minions to write up and send out letters and hope some poor schmuck falls for it. 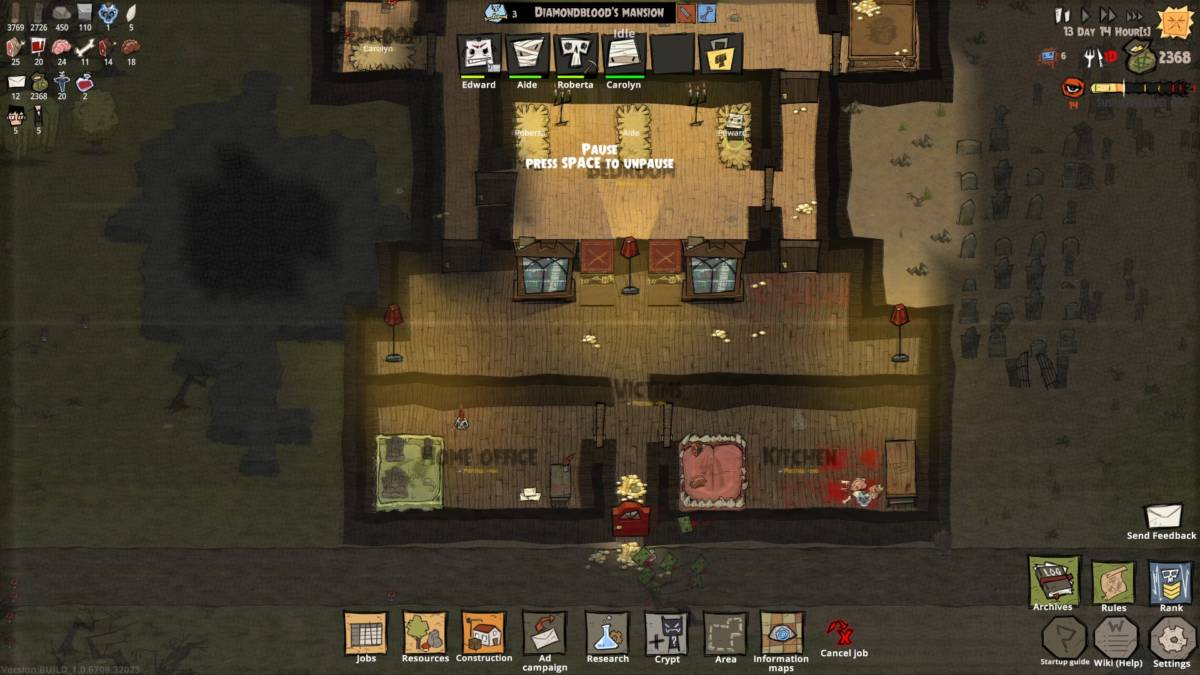 But you can’t just lure them into the woods and kill them like animals; that would be barbaric. So instead you have to construct a foyer that they can feel comfortable in and let themselves be lured deeper into. Then you make a monster bedroom because your skeletons don’t like sleeping on the ground. Once some poor patsies come by, you make a kitchen, fillet them and serve ‘em up fresh.

Conceptually it works and if you’re willing to put up with a lot of niggling issues then MachiaVillain might be great. I couldn’t handle them, though. For instance, you can’t place a wall or floor that intersects a tree so you have to chop down the whole forest before you can see what you can build. In Rimworld, the same problem is handled by having intersected trees be marked for cutting; that’s gold star service right there. There doesn’t seem to be a way to set the importance of jobs, meaning you can’t have cooks gather resources when they’re needed if you want them to cook at all. 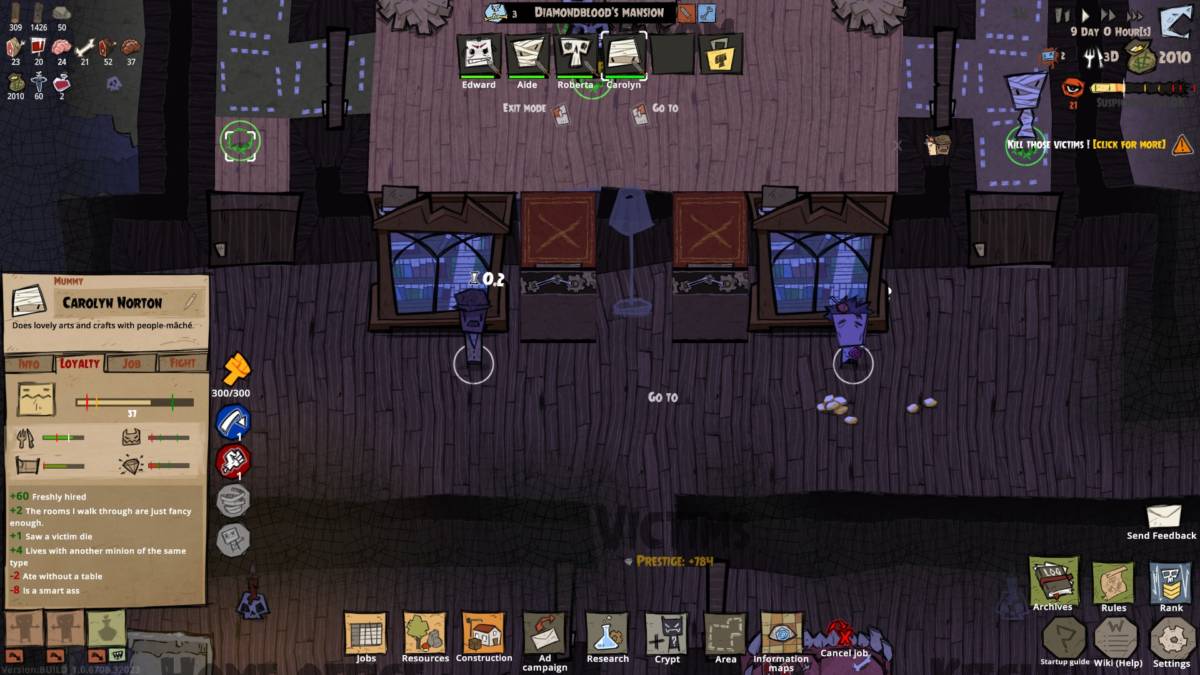 The biggest gripe I have, though, is unfortunately the meat of the game (get it, meat?). The world of MachiaVillain is covered in a dense fog of war, which means if you don’t actually have eyes on it (either through minions or watchtowers) then you can’t see what’s happening. So when victims are coming to the mansion, you’ll have to stash your monsters away (if they’re seen, the people usually run away and are much faster than your minions). Then, because the blood texture is damn near invisible in the overly dim world, they’ll spot some blood by the door because cleaning isn’t important enough to the zombie maid and scarper.

Maybe it’s for the best, though, because if my minions starve then I don’t have to listen to the godawful sound of them eating. In fact, I really recommend playing MachiaVillain with the sound off. The voice acting is gratingly bad and often triggers twice, doubling up into an ear-splitting mess. Building and eating are the worst offenders for bad sound design though as they aren’t only bad but painfully frequent. Mute the game and stick on a Halloween CD. 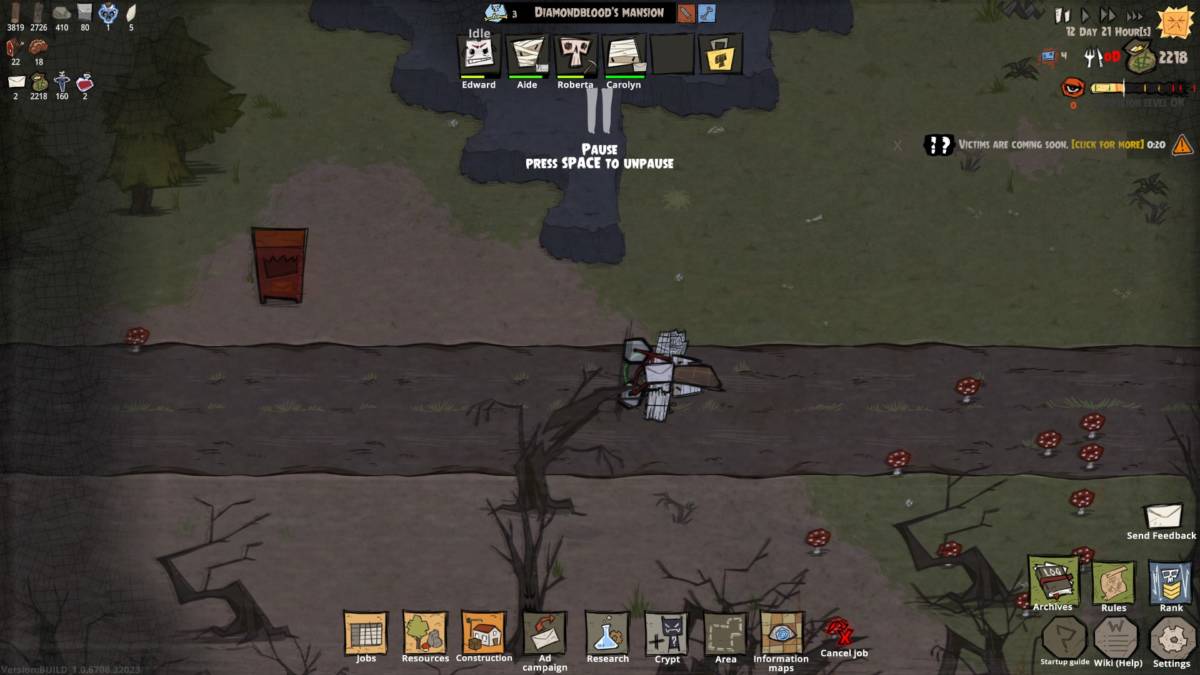 Artistically, MachiaVillain is alright: nothing to get excited about and it certainly won’t win any awards. The characters are nice little cartoon versions of the iconic movie monsters and there is a wide selection to choose from with over 20 monster types, although you are limited to a few basic ones at the start and can unlock the rest by spending Evillium.

The character icons are varied with some skeletons having worms poking out of their eye sockets, some psychopaths looking like Jack from The Shining, and some mummies being fat. However, I noticed what I can only assume is a bug that caused all of my varied psychopaths to turn into Jack once I started, which rained on the parade a bit. 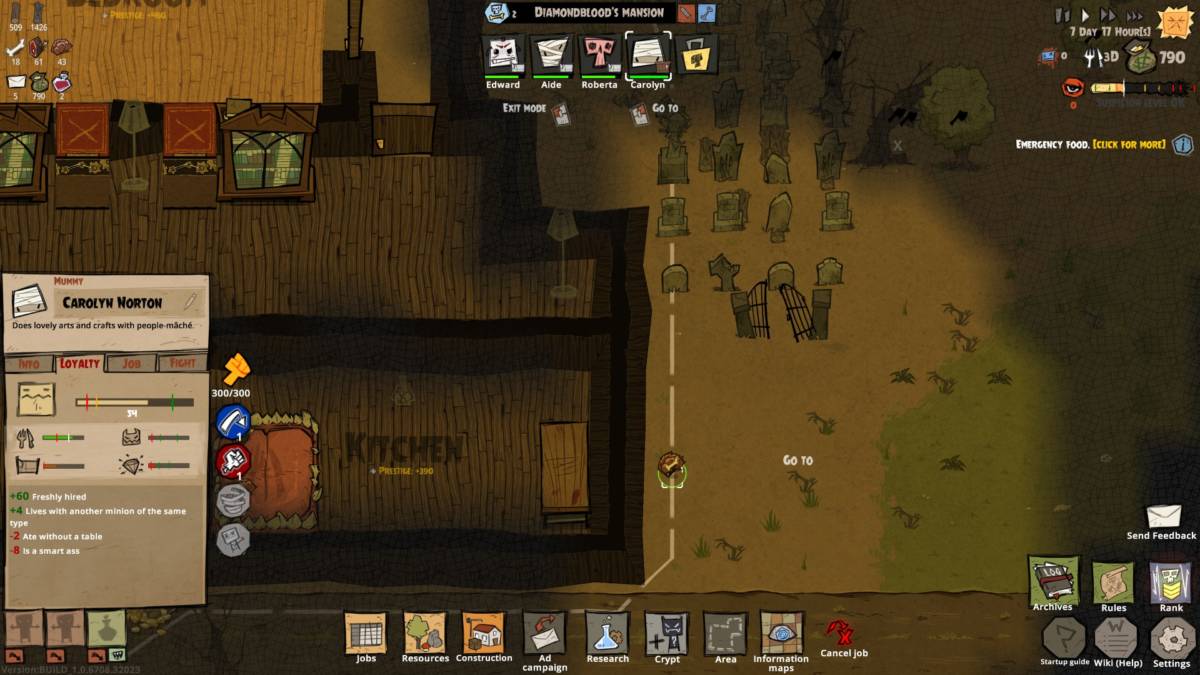 The user interface is clumsy and requires far too many clicks to get anywhere, forcing you to open the menus again and again when decorating rooms with ugly, bulky furniture which for some strange reason block light. Oh, and some furniture is just needlessly more complex and expensive to build. The basic rotating wall – 100 wood and 100 evil wood. Rotating wall for virgins – 10 cogs, 10 circuit boards, 50 planks of wood, 50 stone bricks. I understand that it’s for balancing and that separating the virgin would be too easy if we could place them everywhere but at least make it seem like there’s a reason. A picture of a unicorn does not justify 10 cogs, 10 circuit boards and more refined materials.

And to top it all off, MachiaVillain is buggier than a zombie’s crotch. I’ve had characters turn invisible and stay invisible permanently. Bicycles riding sideways, the road disappear, people gettin stuck in doorways causing the door opening sound to dogpile my ears, and for the game to just straight up crash and stall whenever I tried to load my file up.

I want to like MachiaVillain, I really do. The concept is fantastic and with refinement it could be something worth getting but as it stands I don’t even want to go near it again. If the developers fix it up, change the sound effects, recast the voice actor, and make the UI clearer, then maybe, maybe it would be worth playing but for now, just get Rimworld and add the Cthulhu mods.