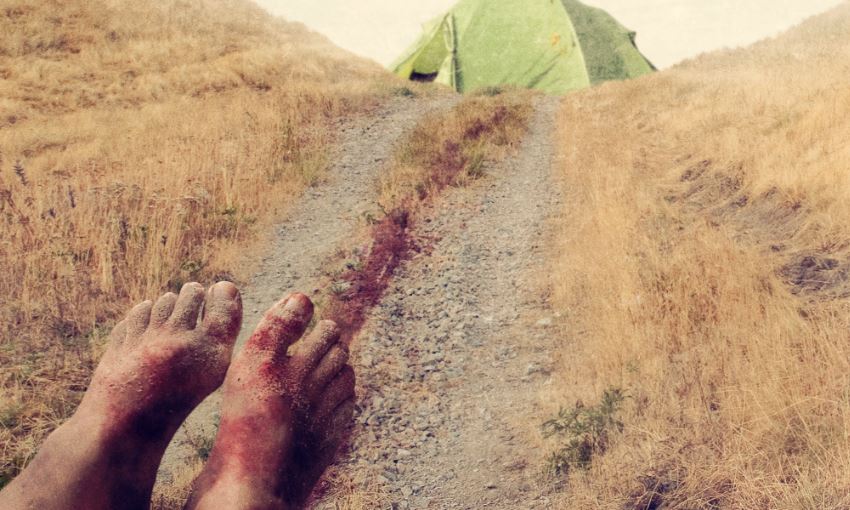 If you go down to the woods today, make sure it’s not in Australia. Or New Hampshire, or that one in The Forest for that matter. Heck, I could go on. There’s no cabin in this woods, just a couple trying to have a nice romantic time, and we can’t be having none of that.

Written and directed by Damien Power, Killing Ground stars Harriet Dyer and Ian Meadows as two lovebirds looking to spend some quality time away from the bustle of urban life. The opening scenes play out a little like Jeepers Creepers with some quality and realistic dialogue between the two as they drive to their destination. The camerawork is steady, panning over the bush wilderness, slowly building unease and tension (underlined by the score).

We get a quick introduction to the beer-drinking local outside a convenience store, offering some sage advice about the suitability of their car for the coming trek. He couldn’t be up to anything nefarious, could he? Aaron Pedersen’s grizzly beard and squinting eyes say otherwise. His equally unkempt ex-con sidekick, played by Aaron Glenane, is next on the trope of antagonists. Their scenes play out innocently enough – we know they ain’t no good, the question is how will they end up with blood on their hands.

The tone reminded me a little of Wolf Creek, predictably perhaps, but as it went on there were splashes of Funny Games and Deliverance to make it more its own film. It definitely wouldn’t be fair to generalise Killing Ground in terms of other films – it has enough about it to stand alone.

I say Funny Games because it is brutal; that combination of awkward characters being awkward, and on-screen violence. But it plays it straight; being honest and not self-conscious works to its advantage as the mystery and violence plays out. Integral to this is another camping family, who are already there by the time our protagonists show up.

The couple bemoan the presence of another tent but decide to stay anyway, camping further up the beach. “But where are the others?”, wonders Sam, as she looks nervously over her shoulder towards the fluttering, empty tent. Cue the parallel timelines as the family story plays out. This is a horror, so expect horror, but equally, it has a sense of drama and atmosphere, as the cinematography and the strings of the score ramp up the tension, rather than relying on jump scares.

It would be easy to watch the trailer, read the synopsis, and make your own judgement over what kind of film this is using stereotypes. I may have been be guilty of this; having watched 5 or 6 too many Wrong Turns, all of them morphing into one big elephantine mess after a while, but Killing Ground shows how this type of story can be told. It’s not just about the violence; character is what elevates it, and thankfully it is character that defines the ending, not cliche.

It was satisfying to see genuine character choices playing out in these extreme conditions, not your typical run and trip and stab and somehow get the upper hand at the last minute, stumbling bloody from the forest lining, which just made it all the more horrific as it was easier to imagine yourself in that situation.

Verdict
Killing Ground is a brutal and realistic thriller with characters that lead the story. Intelligent, and beautifully shot, with an uneasy score, it is satisfying viewing.
8
Cultured Vultures is a pop culture website established in 2013 covering all things gaming, movies, and more. We eat your words.
All The News On The Biggest Games