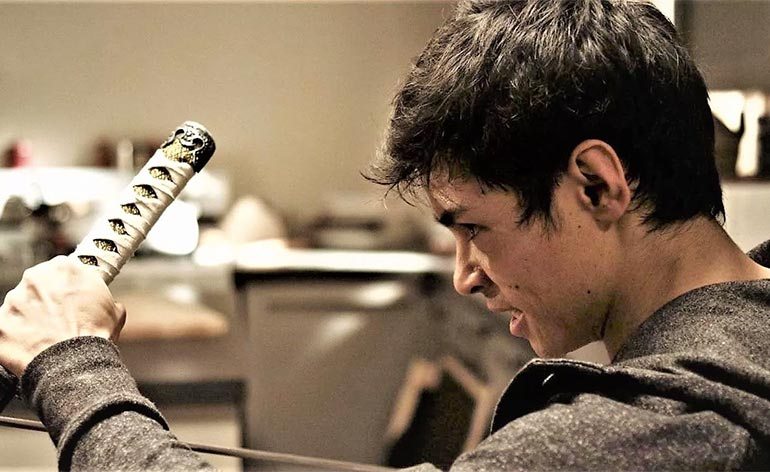 Taking inspiration from ball-busting films such as The Raid: Redemption, Kill Order is the story of David, a mysterious teenager suffering from skull-splitting headaches and visceral visions. When armed men burst into his classroom to abduct him, something inside him awakens, and he single handedly takes them out. As his life falls apart around him, deadly brutes hot on his trail, can David take revenge on those who turned him into such a savage weapon?

Martial arts films can make or break purely on their action scenes, and it’s one of few genres that don’t necessarily need a strong story to support it. Regardless, Kill Order’s plot is so limp and laughable that it clashes with the films sadistic brutality, making for a confusing tone and overall experience.

Spoilers beyond this point, as we’re delving deep into the nitty gritty of Kill Order.

First and foremost, Kill Order is a demo reel of fight choreographies tied together by a loose and generic story, but it frankly knows that’s what it is. It reminds me of another intense rampage of violence, the synthpunk shooter Hotline Miami. Not so much in terms of themes, but more so in the film’s structure. The bizarre and vague story is interspersed between long, flashy, and brutal fight scenes which last for minutes on end and feel even longer. And in a film that is already a crunch at only 70 minutes long, these fight scenes devour the film.

This isn’t to the movie’s fault though, as the point was clearly to convey solid action scenes in interesting scenarios, and it delivers on that with surprising sturdiness. The action is effective, frenetic and very obviously choreographed to sleek flawlessness. Chairs, pens, and even road signs are used to bash heads in this movie, providing a creative usage of setting. This style of action scene might be too ostentatious for some, especially those that prefer a rawer, more realistic, and more sluggish fighting style, like in Oldboy’s legendary hallway hammer scene. In this movie, though, the strange sci-fi/fantasy plot allows for enough suspension of disbelief to picture such meticulous and professional-looking fight scenes. Additionally, they add warbled effects over certain attacks or characters to emphasize their magical powers, showing visually that these punches aren’t your typical brawl-buster.

These details, though, become detriments when looking at the bigger picture. As much as I’m complementing the look of the fight sequences, the plot does not reach this level of competency, and in fact, falls flat in being unique, only standing out due to the gimmicks and cursory lore.

The whole movie feels weirdly disconnected with itself. The tone of the dialogue and the presentation clashes against the actual fight scenes and plot. It feels like a gaudy anime instead of a dark live-action film, with luminous interdimensional energy, amoral research facilities that train supersoldiers, polished fights that dissolve into brutal executions, and everyone dying in the end without any real closure or satisfying ending. The seriousness of the drama does not match the glowing eyes. jello-like powers and teleporting supervillains.

It actually kind of breaks the movie if you think about it for a second. The fight scenes lose all tension as soon as those ridiculous blue contacts light up. It’s a tumultuous aesthetic, and one that cracks the film’s presentation.

In terms of tone, the shaky-cammed and oppressive aura becomes broken by exposition scenes describing mystical dimensions and eye-rolling lines such as “Love is pain”, the latter being part of a completely distracting scene in the end of the film where David “talks to his real self”. A theme of identity becomes apparent during this scene, but it has never surfaced before this point, completely disconnected from all the mindless, simple violence seen throughout the film. There was a lack of vision in the narrative, and sadly, it shows its ugly face too much to be ignored for the pretty punches.

Ultimately, Kill Order is a film that benefits from being watched without thinking. It’s showy and wacky action is solid enough to carry the film for people just looking for some enjoyable fight choreography, but for those seeking a gripping cast of characters to care for, searching elsewhere might prove to be more productive.

Verdict
Kill Order is filled with adeptly planned and impressive martial art pieces, but the inner conflict between the story, tone, and aesthetic melts the film into a disconnected mess of ruthless killings, unexplored sci-fi concepts, and a revenge plot which lacks enough punch to stand on its own.
4
Cultured Vultures is a pop culture website established in 2013 covering all things gaming, movies, and more. We eat your words.
All The News On The Biggest Games