Jumanji: Welcome to the Jungle (2017) REVIEW 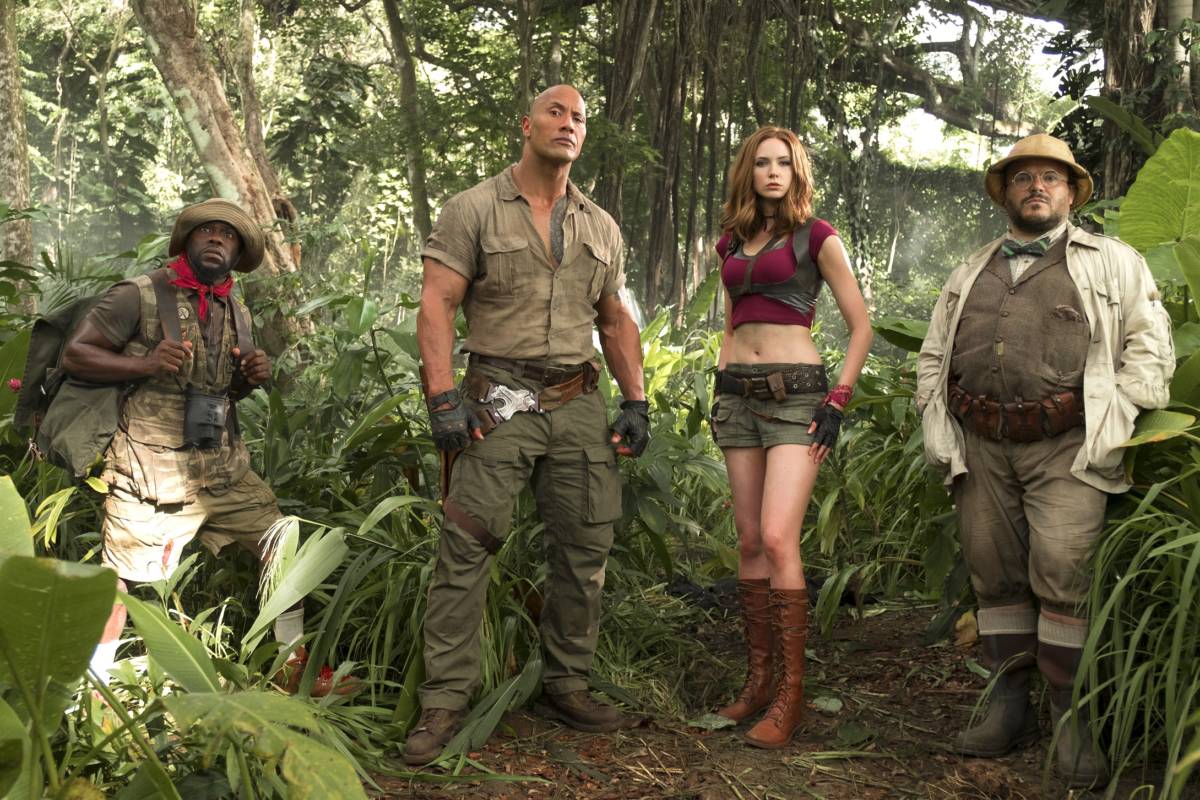 At first glance, Jumanji: Welcome to the Jungle feels like it would be an unnecessary sequel following the passing of Robin Williams. That being said, the original film doesn’t necessarily need to be viewed to enjoy the fun there is to be had in the sequel directed by Jake Kasdan.

Where the first film’s humor came by way of David Alan Grier’s Carl reacting to all the craziness going on, the fun in the sequel comes by way of the differing personalities of the main characters, but especially their reactions to their new avatar bodies.

It’s shortly after being given detention –because how else would these four end up together– that they discover Jumanji, now a video game, and get sucked into the game where Spencer, Fridge, Martha, and Bethany soon find themselves as Dr. Smolder Bravestone (Dwayne Johnson), Franklin “Moose” Finbar, Kevin Hart, Ruby Roundhouse (Karen Gillan), and Professor Shelly Oberon (Jack Black).

As Spencer (Alex Wolff), Fridge (Ser’darius Blain), Martha (Morgan Turner), and Bethany (Madison Iseman) discover who they are while in avatar form, the film makes a case for being the most expensive high school coming-of-age film to ever be made. In their fight for survival, the four of them depend on finding the missing piece, pilot Jefferson ‘Seaplane’ McDonough (Nick Jonas), stuck in the game since 1996, while steering clear of Van Pelt (Bobby Cannavale).

Be honest: most people are coming to see Dwayne Johnson, but Gillan holds her own and kicks ass in her own right. The game –and the film– would have served her better to have given her a costume that doesn’t cover so little of the body. One of Ruby’s strengths is dance fighting and one could watch Gillan kick ass all day long.

Even though it’s self-absorbed Bethany who turned out to have picked a man as an avatar, there’s just something very strange about watching Jack Black playing a teenage high school girl in a man’s body. Black has to play the character as if he were Iseman so the veteran actor had to do a lot of work in order to do justice to Iseman’s performance. It’s sometime after they arrive into the jungle and after they catch a breather that Bethany needs to pee. Not knowing what to do, the guys offer to give her lessons in learning how to go to the bathroom as a guy. It’s the comments Bethany shouts to Martha that don’t work and ends up falling very flat with everything currently going on in the industry regarding to sexual harassment. That being said, it is funny to watch Black as Bethany teach Martha how to flirt.

Kasdan, directing from a screenplay written by Chris McKenna & Erik Sommers and Scott Rosenberg & Jeff Pinkner, is no stranger to fun and is able to translate the spirit of the first Jumanji film into the sequel. What’s important is that they were able to make it work with a new cast of characters and not depend on some sort of way to force a CGI’d Robin Williams appearance into the film. This film goes more into the rules of the jungle and by evolving Jumanji into a video game, characters have their own powers and weaknesses in addition to three lives.

Visually, the film is very impressive with the Hawaii scenery standing in for the jungle and they put Andy Serkis in overtime to play every animal in the jungle (he’s not in there — it’s a joke, don’t worry). While the visual effects of the first film hold up over twenty years later, they don’t come close to what’s seen in the sequel. Most of this has to do with taking the characters to the jungle rather than bringing the jungle into their school.

In bringing together a fun cast, Jumanji: Welcome to the Jungle captures the spirit of the 1995 classic. An expensive coming-of-age film, the action-adventure comedy is enough to stand alone on its own merits and one is not required to have seen the original. In a year that’s been short of laughs from studio comedy offerings, Jumanji doesn’t falter.

Sony Pictures opens Jumanji: Welcome to the Jungle in theaters on December 20, 2017.