Burn the book, though. 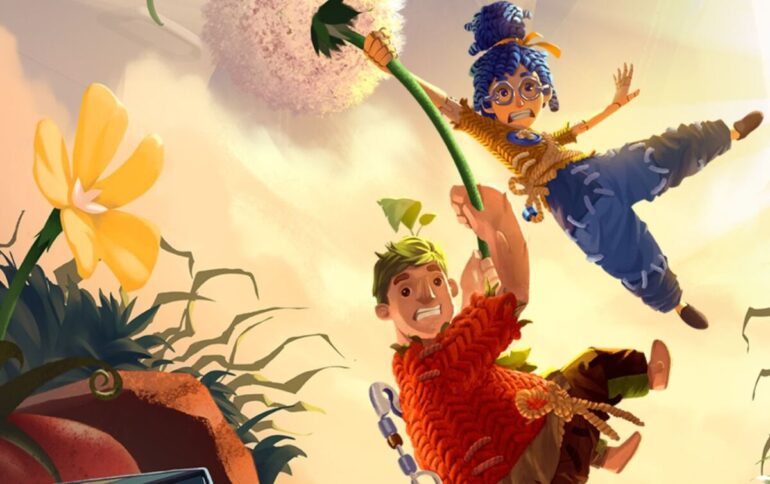 2021. It has been what some call “a year”. To celebrate this collection of sun rotations, we’re looking at the best games of 2021. Next up: It Takes Two.

It Takes Two quite possibly could be the Game of the Year for 2021. It’s a bold claim, but it’s a game that’s been stuck in my head ever since playing it earlier this year with my partner. Having been big fans of Hazelight’s previous game, A Way Out, our anticipation of It Takes Two was huge, and those lofty expectations were completely exceeded once we finally started playing.

Granted, it’s not a perfect game by any stretch, and that’s largely to do with the story and one character in particular. The plot sees Cody and May, a pair of separated parents, shrunk down into small toys by weird magic who must try to return to their bodies. Along the way, they’re encouraged/goaded to work on their failing relationship by an incredibly annoying pelvic thrusting therapy book known as Dr. Hakim.

The story’s a bit daft, or at least goes to daft places, and there’s a lot of “I know writers who use subtext, and they’re all cowards” vibes throughout (they used magnets for a few levels, and now they’re more attracted to each other, do you get it?!), but it’s hard to fault It Takes Two for any of this. It feels like there’s an earnesty there to tell a story of a couple overcoming the odds, working on their issues instead of ignoring them.

It Takes Two’s biggest highlights are literally everything outside of the cutscenes, which can be so varied that it offers more than enough motivation to finish the game if the story isn’t doing it for you. At a base level, the game’s a 3D platformer with Cody and May as small toys exploring a magical/fantasy version of their own house, with a few interesting detours along the way. The environments themselves are filled with imagination, but it’s the gameplay that really steals the show.

Instead of just relying on a formula of fast-paced platforming and calling it a day, It Takes Two throws gameplay mechanics at you with an alarming speed. Each level comes with its own gimmicks that require players to work together in ways they maybe haven’t in other co-op games, as Cody and May receive different abilities to each other. One world features the aforementioned magnets, another involves clones and time manipulation, but there’s a ton more to enjoy.

I said something similar about Resident Evil Village during these Best Games of 2021 articles that it’s hard to predict where that game would go next, and the same is definitely true of It Takes Two. Sure, it’s a platformer, until it’s a fighting game/flying sim depending on who you’re playing as, or a top-down dungeon crawler, or a racing game, or whatever random turn/flight of fancy the game nosedives into next. It’s unapologetic and fearless, but it works brilliantly.

Despite all that, the moments where the gameplay slows down and allows the players to explore also shine brilliantly. Discovering new interactables and mini-games feels like a worthwhile event. While they’re a bit of a distraction from the main objective, they’re fun little moments to enjoy and create memories with your co-op partner. If anything, the minigames actually seem to do more for bringing Cody and May together than the book does. Gaming brings people together, remember that.

With It Takes Two closing out the year as part of EA Play (and subsequently Xbox Game Pass Ultimate), the barrier to entry on this wonderful title has never been lower. If you’ve got a co-op partner ready to go, you should definitely give this game a whirl, so long as you make sure to boo every time the book comes on screen.

READ NEXT: 20 Best PS5 Co-Op Games To Play With Friends