"Except, unlike The Babadook or Hereditary, Isabelle is done with very little finesse or care towards the subject material." 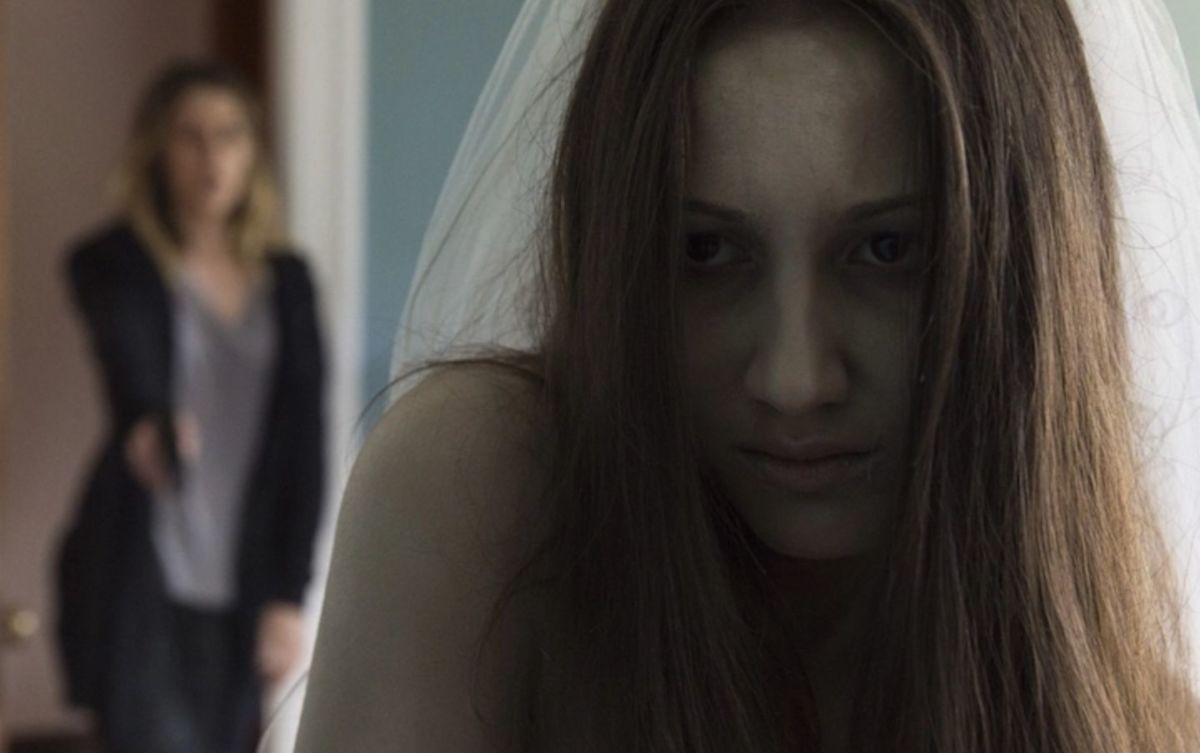 Isabelle follows a married couple, Matt Kane (Adam Brody, phoning it in) and his heavily pregnant wife Larissa (Amanda Crew), who had just moved in to their new house. When picking up her mail one day, Larissa meets her next door neighbor, an elderly woman named Ann, who is hesitant to attempts at small talk.

Looking over to the neighbor’s house, Larissa spots Ann’s wheelchair-bound daughter Isabelle (Zoe Belkin) staring at her through the upstairs window, and she immediately feels immense pain and begins bleeding heavily. In the hospital, it is revealed to Matt that the baby is stillborn and that Larissa was medically dead for one minute (something the movie loves repeating). This would have lasting effects, the doctor tells him.

When the couple returns home, Larissa begins experiencing strange things. She keeps hearing her baby’s cries, and sees him in his crib. All the while, she keeps catching Isabelle staring at her through her window, and begins seeing her where she can’t possibly be.

The movie’s official website describes the movie as being “in the vein of Rosemary’s Baby and The Exorcist”, which is a high bar to compare your horror movie to. It shares the whole “married couple trying to start a family” story with the former, and it probably wants to tie its possession angle with the latter, but its story is much more comparable to more recent horror hits, The Babadook and Hereditary. Similarly to those two films, Isabelle’s story, for the most part, is less about the paranormal occurrences as it is about how someone handles the grief and depression that comes following the death of a loved one. Isabelle isn’t so much about the titular creepy girl next door as it is about how the Kane, Larissa especially, copes with losing their unborn son.

Except, unlike The Babadook or Hereditary, Isabelle is done with very little finesse or care towards the subject material.

To paint the picture of how subtly this movie delivers its message, there is a scene where a priest visits the Kane’s home to deal with Larissa’s supposed possession. Larissa greets him by stating the movie’s thesis statement: “It’s not a possession; it’s grief.” Though in fairness the movie doesn’t get much help by Crew not selling either possession or grief well through her performance, just coming across as moody or petulant a lot of the time.

Even the idea that Larissa might be being possessed isn’t introduced properly. Larissa starts seeing and hearing things, and Matt, who is completely skeptical throughout the rest of the movie, runs to the priest and starts asking him “do you believe in possessions?” and invites him to their home. And in the very next scene, he throws the idea out the window.

The film is only 89 minutes long, and it’s as if it came down to that runtime because pages of the script was blown away by the wind and nobody noticed. There are two short scenes in the first half of the movie of Matt at work interacting with a flirty intern, which may have been the movie’s attempt at a subplot. These add nothing to the story or Matt’s character development, but are still in the movie, while there are stretches of the movie that are edited together so choppily that there had to have been scenes missing from them.

The technical side of the movie is wildly inconsistent. Some scenes look great – one dream sequence in particular looks beautiful shrouded in darkness – and the sparingly-used special effects all hold up. But then there are odd editing choices where scenes end abruptly, and there are many indoor scenes with some rough sound design where they clearly forgot to edit out the echoes.

Where the movie does somewhat work is when it came to the scares. Isabelle eschews the routine jumpscares and sells the feeling of intrusion through carefully built-up scares, with the score by Mark Korven (The Witch) doing a lot of heavy lifting. The scenes with Isabelle and Larissa in particular are effective, as Isabelle gradually starts to sink her claws into her prey. Although it must be said, hearing a baby cry in the other room for the fourth time in a sub 90-minute film does get old.

And then there’s the ending. It seemed at first that the movie was going for a darker ending, but a poignant one with what would’ve made for great commentary on mental health; how you should believe and help your loved ones who open up to you about struggling with depression, as opposed to going out of your way to try and prove it’s not there.

But then the movie went on, and by doing so, cancels out its lovely message en route to a contrived happy ending with an extremely ham-fisted take on recovering from grief, which effectively amounts to telling a person with suicidal impulses to, like, not. Except that’s still not it.

No, the actual ending of the movie completely bulldozes any kind of message it tried to send in the name of “happily ever after” for the Kane’s, via an obligatory final showdown which uses the worst shaky-cam this side of a direct-to-VOD action flick. Not only that, the ending doesn’t even make narrative sense.

If you walk into Isabelle only for the scares with zero expectations on anything else, it might not be a complete waste of your time. That is, if you ignore the wooden acting, the technical incompetence, the story in general, and the general feeling that it’s not properly finished yet.

Verdict
Isabelle squanders a creepy premise and some solid scares through odd narrative choices and technical shortcomings, and ruins any goodwill built with its ending.
3
Cultured Vultures is a pop culture website established in 2013 covering all things gaming, movies, and more. We eat your words.
All The News On The Biggest Games