Is Andrade WWE’s Next Latino Star?

Does 'El Idolo' have what it takes to be the people's hero? 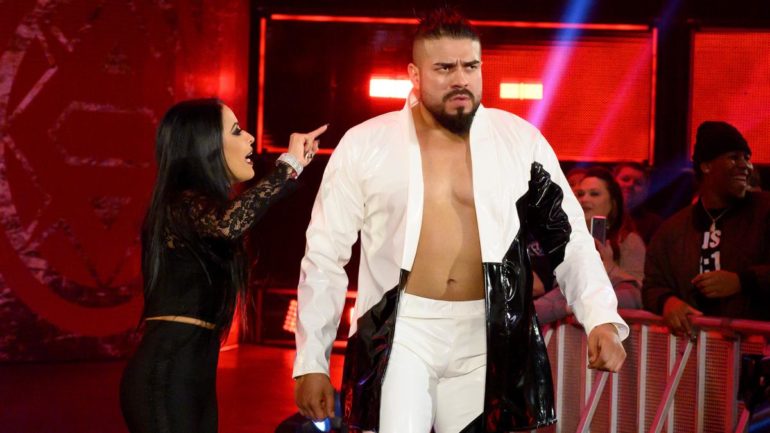 This week’s episode of Monday Night RAW featured Seth Rollins and Andrade tearing the house down in a singles bout to determine whether or not Andrade would take the reins of Team RAW. The match itself was a barn-burner, reminding the WWE Universe that Andrade has what it takes to steal the show. The former NXT Champion started to rally the crowd behind him, but ultimately lost the match to Rollins via a shocking case of disqualification, thanks to the Lucha House Party.

Kalisto, Dorado and Metalik hit the ringside area and attacked ‘The Architect’, giving Seth the win over Andrade. The trio of luchadores drilled Rollins into the barricade, leading many to believe that Andrade had formed a new Latin-centric stable with the stars of SmackDown Live, although his face told a different story. Andrade seemed confused and infuriated that the Lucha House Party had cost him the victory. Moments later, the trio continued their assault on Andrade.

Rollins assisted his former opponent in fighting off the attackers, forming a brief alliance with ‘El Idolo’. Fans in attendance were delighted to see Andrade side-by-side with one of the leading stars of Monday Night RAW, not only as enemies but as potential teammates.

It seems that in this strange occurrence, we’ve seen a double turn involving Andrade and Lucha House Party. Now, many reports and rumours have speculated that WWE have been looking for a hot, young Latin star to begin tapping into their lucrative wrestling market. It seemed that WWE were starting to shift focus onto budding Cruiserweight star Humberto Carrillo, but now Andrade is once again in the spotlight, he could indeed fill that role.

Although, could we justifiably say that Andrade is the right man to be pushed to the moon? Does he have what it takes to be the next Latin babyface, in the vein of Rey Mysterio and Eddie Guerrero?

Andrade definitely has his fans, especially after his incredibly successful run in NXT, putting on stellar matches with the likes of Aleister Black, Drew McIntyre and Johnny Gargano. Andrade was a key figure in picking up WWE’s first 5 star rating from notable wrestling journalist, Dave Meltzer, so there’s no doubt that he should be rewarded with a career full of credit. But since debuting on SmackDown Live in 2018, Andrade hasn’t really achieved much.

Andrade has been involved in some fairly high-profile mid-card feuds against Finn Balor and Rey Mysterio, but has yet to win any championships. He’s just another case of a former NXT champion struggling to find his feet on the main roster. It’s going to be a difficult task moulding him into WWE’s Latino babyface, unless they’re willing to start giving some big wins to his name.

A potential alliance with Seth Rollins could be a strong start to the rest of his career. Presumably Andrade will pick up a feud with the Lucha House Party, using Rollins as his partner for the foreseeable future. Should this lead to a potential shot at the RAW Tag Team titles? I wouldn’t say no.

Fans are slowly starting to sour on Seth as RAW’s flag-bearer, and after their singles match on RAW this week, I imagine they wouldn’t turn away from rematch with Andrade going in as the hero against Rollins’ heel persona. Perhaps their alliance turns to a game of one upsmanship, Rollins is pushed to the brink of turning heel and starts a competitive feud with Andrade for RAW’s top spot.

Andrade could eventually claw his way to the top, maybe even find himself in contention for the WWE Championship if WWE play their cards right. Should WWE ever find themselves south of the border, it would be the perfect time to put Andrade at the fore-front of programming and present him as the underdog going into a huge main-event title fight against whoever ends up with the title after Lesnar.

Andrade might not have buckets of charisma in front of an English-speaking crowd, but he can certainly handle himself with a presence. His time as La Sombra in NJPW allowed him to flourish with his ring-skills alone, he refined himself in AAA and proved that he can be a strong babyface if in front of the right audience. Perhaps allow the guy to be a bit more creative in his matches, rather than giving him a structure to follow and forcing him to rely on Zelina Vega to get the crowd invested, then Andrade might start to evolve into a strong leading man.

WWE could definitely shape ‘El Idolo’ into their new Latino babyface star. He has the uncanny ability to get over with a crowd through wrestling alone, he has a natural charisma that has yet to be tapped into and can appeal to an audience that has been widely ignored since Mysterio’s world title run in 2006. It’s time for WWE to come through on their promises for a Latin star. Andrade is that man, let’s make it happen.