INTERVIEW: Strange U – Embracing the Strangeness 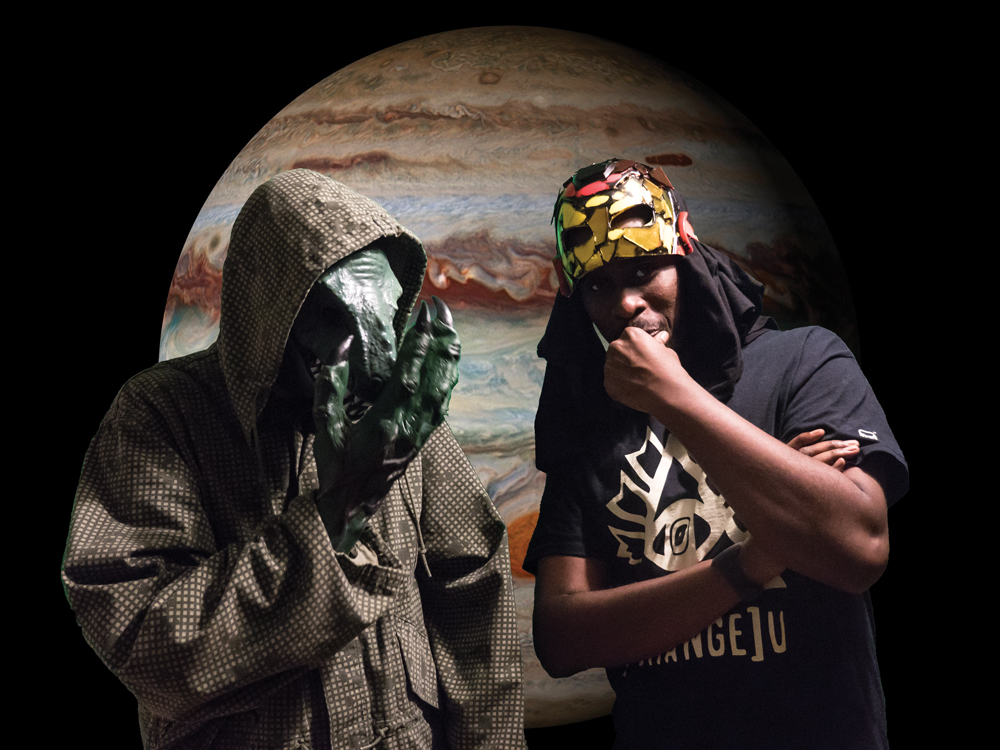 It’s kind of incredible just how much groundbreaking music has been released under the High Focus banner in its short, 7 year life. So deeply are they wired into the UK hip-hop scene that whenever a new rapper or group start working on things, they’re not only the first to know, but the best option for a signing.

King Kashmere and Dr. Zygote have been on more than friendly terms with them for years, and now that they’ve come together as Strange U, the relationship has taken on a new shape. Strange U are, without question, making some of the most interesting rap music out there at the moment, where else are you going to hear references to Portal, Ghostbusters, Dolph Lundgren, Mary Poppins, Superman, Grey’s Anatomy, dark matter and Hancock all in the space of a few tracks? The production is dark, glitchy, and ideally suited for the lyricism it comes bundled with.

#LP4080 is their first long player, their first release on High Focus and their finest work to date. I caught up with them at the launch event at Birthdays in Dalston to talk about it. Birthdays is an odd venue, upstairs is a pretty standard looking East London bar, decent food, plenty of seating, relaxed vibe, the kind of place you’d perhaps go for your actual birthday if it was zero hour and you’d forgotten to plan anything else. Below, however, there’s a dark, narrow subterranean venue, the kind of place UK hip-hop was born in.

Kashmere and Zygote are two distinctly different people, in almost every conceivable way. Even as I was first introduced, and shown into the green room, that was evident. “I have to warn you, we’re a pretty shit interview.” Kashmere said, as I fumbled with the record settings on my phone. In my experience when people say that, it’s usually the opposite, and this was no different.

The first thing I wanted to know was what kept luring the two of them back into UK hip-hop. “In the area I grew up in, I saw how certain artists could move around in hip-hop, but still retain that identity. I grew up listening to Kool Keith, Godfather Don, people like that, these guys had so many different styles.” Kashmere says, motioning with his hands. “It might seem crazy to everyone else, but for me I’m always making hip-hop.” 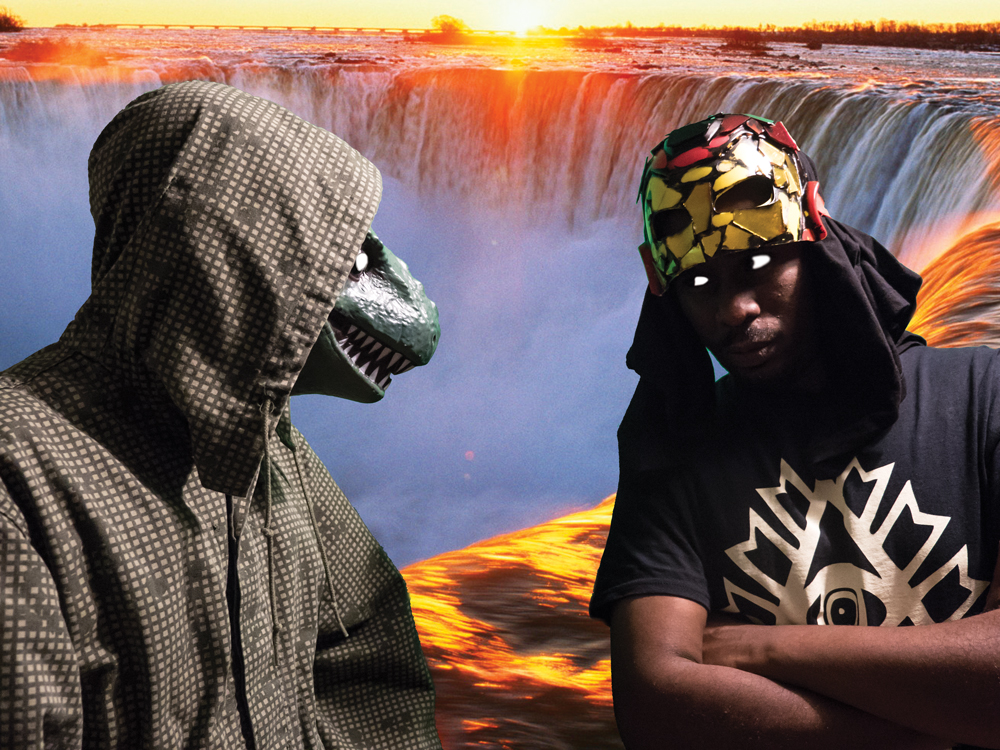 Kashmere has rapped over an endlessly varied array of beats, and Zygote has dabbled in various genres under various guises, but Strange U beats are style unto themselves. “I’m a lot less closed-minded than I used to be, but at the same time, I just like doing stuff around this tempo. I think about it more in terms of tempo than anything, I appreciate stuff across all tempos.” He says, “I’d say we have been more experimental before now, the past couple of EPs were a bit less hip-hop and bit more electronic. This time there was a bit of a conscious decision to have more straight up hip-hop stuff.”

The real difference maker is how it comes across live. I’d seen Strange U once before at another High Focus album launch, and they stole the show then. As a headline act, they were utterly overwhelming. The depth of the sound had the crowd sinking and rising, and Kashmere had them so engrossed that half the time they didn’t even realise what they were chanting (“You lot are fucked up!” he said to them at one point).

Strange U’s sound is hard to describe, but I’d almost call it sci-fi, and the crowd aren’t the only ones who have a different response to it, the guest vocalists have their work cut out too. Cappo, Fliptrix, Lee Scott and Jehst all featured on the album, and the latter 3 were at the show. All of them provided bars well outside of their comfort zones. “I didn’t give them any kind of direction in that way.” Kashmere relays, speaking on the subject “I think the beat has a lot to do with how someone sounds. It’s like with Little Wayne, a lot of people might dislike him, but if you heard in on an Alchemist beat, or a Premier beat, you might have a different view on it. It’s the same with us, these beats aren’t what they’re used to, and it informs the way they rap.”

Kashmere himself seems to have adapted his style almost perfectly to Zygote’s bizaree offerings. His rhymes are heavy and hard, but measured. The nearest comparison I can make is MF Doom. “Ah!” He exclaims, throwing his arms up. “That’s the thing I’ve been hit with since the beginning! When I started doing Strange U the lyrics were very freeform, where it went was where it went, these days I find it to be a bit of a hindrance if I have a specific topic, unless it comes completely naturally. If someone says ‘this needs to be about this’, that’s difficult. Normally I just start writing, and eventually it turns into something. Tracks like Mumm-Ra are idea driven. Usually it starts with the beat, and the way [Zygote] makes beats gives you a vibe, tells you where you want to go. I just trust my pen.”

If you’re getting the sense that this is the kind of collaborative music which really deserves the term, that’s far from an accident. This is where High Focus come in. As a label, they’re not only always encouraging artists to work together, but nurturing any creative drive they find, however outlandish. So how did the Strange U/High Focus relationship start? “They just held us up at gun point. It wasn’t cool.” Kashmere says, shaking his head. “I just went to one of their shows to see a few people rap and I got tackled at the door, gun to my head, it wasn’t fun.”

At this moment, Jehst, who had been quietly pouring himself a cup of wine nearby, decides to weigh in. “Fliptrix is a terrifying character!” He laughs, knowing that the High Contrast founder is just on the other side of the door. “No-one really knew what to do with us. If we’d been doing some other kind of rap or some grime, maybe, but that’s not what we’re doing. I think people look at us and go ‘what the fuck is this? How are we going to sell this?’.” Says Zygote, bringing it back to reality. “High Focus will call us and ask us how we want to do things, even with the release, they told us the vinyl was coming back sooner than they thought and asked how we’d feel if they dropped it earlier. It’s not like some dude trying to feel like he’s made his mark on the thing. If labels don’t make music, running the label is their creative endeavour. Some people feel like they have to have some sort of input into something, but these guys are completely democratic.”

Kashmere, as it turns out, has his own thoughts on their attitude towards production as well. “This one time I was recording in the lab, and Fliptrix just came into the booth and put me in a fucking sleeper hold. ‘Rewrite those bars and I’ll let you fucking go’. He kept me in a sleeper hold until I rewrote the bars. It was hardcore. He looks calm, he’s not.” As the laughter dies down, his tone shifts. “They’ll listen to you about what you want to do, and when you submit the material they listen to it from front to back, over and over. They’ll do their best to make sure it happens right.”

High Focus have worked this way with all their signings, from The Four Owls to Jam Baxter to Rag N’ Bone Man. For Strange U, this was a welcome change, and in fact the title of the album, which references a Tribe line about not trusting labels, has some relevant backstory. “We had some more fuckery with someone else, this American label.” Zygote says, causing Kashmere to half laugh, half sigh. “We got flown out to New York to talk about signing to this label, and it just didn’t work out.”

“Basically we went over there, everything was cool, they were talking us up, it was all great, and then in the end they just offered us a 360 deal.” Kashmere says, resting his head in his palm. “It was worse than your average as well.” Zygote continues. “All the things we had negotiated on, none of it was taken into account when they sent us the contract, all the things we pushed back on they had just ignored.” “They were just like ‘we listened to what you said, but fuck that, bend over, now’.” Kashmere says, summing up.

If there was ever a better motivation to seek out more trustworthy representation, I haven’t heard it. Seeing Strange U on stage, surrounded and celebrated by the High Focus crew, it’s abundantly clear that they made the right call. Really though, regardless of where they ended up, Strange U were on for great things. Their synergy is so balanced, so different and so fascinating that you find yourself being pulled further in by each new track you hear. 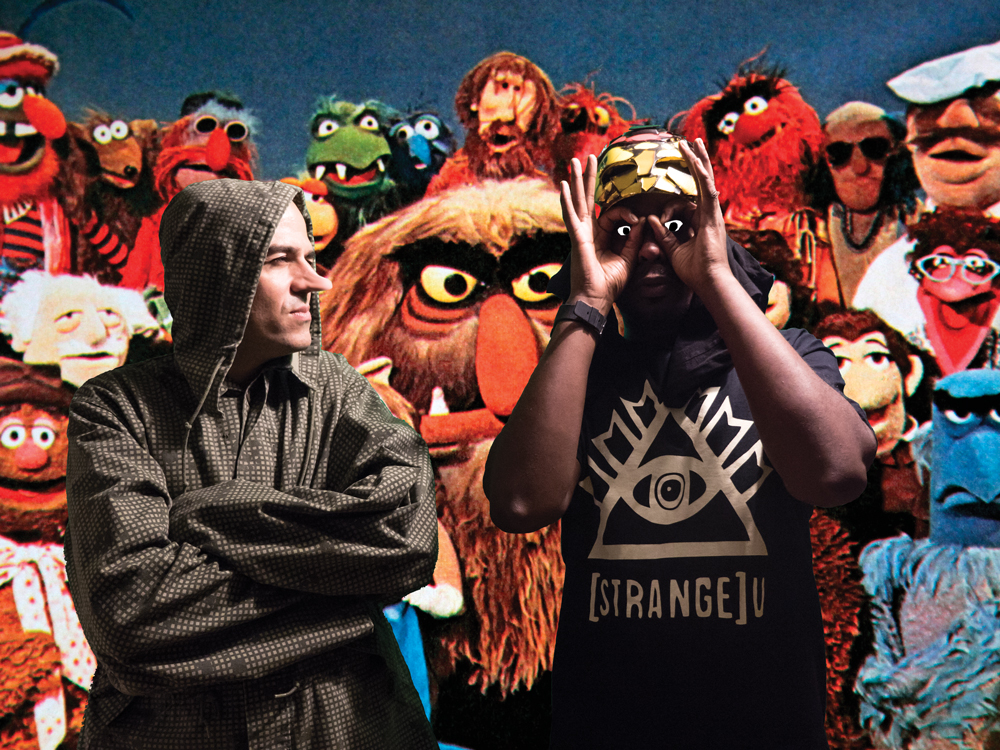 A lot of it comes from this idea of taking established ideas and making them, well, strange. The duo have no agenda, as such, they just follow their own momentum. “There’s nothing more fucking tiresome than conscious rap where someone’s on their high horse, telling you about the injustice in the world. I speak for myself.” Zygote says, “Kashmere does it with an element of humour, which is very important.”

“There are always outside forces trying to pressure you into doing some kind of social commentary, but I felt none of that when I was doing this. This was all natural.” Kashmere says, endlessly motioning his hands around in time with his speech, like all real MCs do. “In fact, ‘Mr. Kill’ came from a conversation I was having with Lee Scott, as it happens, we were doing the video for ‘Reel It In’, and it was around the time that the pig’s head story came out. Lee was talking about the Bullingdon Club stuff and that sparked it off, I didn’t feel compelled to comment on something, it was just one conversation that sparked my imagination. I prefer taking on a character and then speaking through them than saying ‘this happened at this time, and that sucked’. I learned that from Kool Keith.”

All of this imagination was present on stage, and when they came off the crowd seemed bewildered and disoriented. They all got loose, but they all had a lot to process, and being spat back out into the streets of East London at the early hour of 10pm wasn’t going to help.

If there’s one thing to take into account with Strange U, it’s that they have managed to do something which many artists will only ever dream of doing – establish a style all their own. The ‘Strange U sound’ is far from speculative, it’s real, and it demands your full attention.