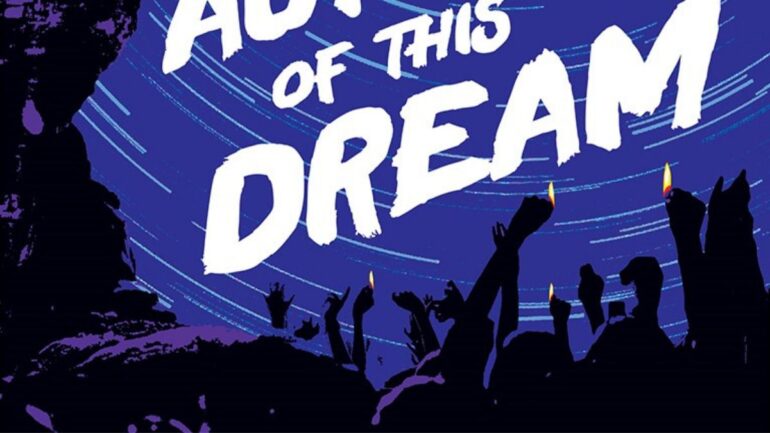 Seth Mullins' Authors of This Dream

I sat down to speak with Seth Mullins, the writer of The Authors of This Dream, which releases on May 11th, 2021. The novel follows the story of Brandon Chane, a musician who is always ready to throw his fists at the slightest provocation. After a fight outside a music venue nearly proves fatal, he’s feeling at the mercy of dark forces threatening to tear his life apart. Even as a gifted poet and musician, his efforts to channel pain, frustration, and thwarted love into his music may not be enough to save him. The Authors of This Dream is Mullins’ first novel in a visionary fiction series titled Edge of the Known.

Your novel is fiction, but also loosely based on your life as well. So why a novel instead of something more non-fictional, like a memoir?
Well, it’s based on a little germ of my own personal experience, and I took it off in a different direction. The common ground is that I have some experience as a musician, songwriter, performing, so in writing about the fictitious band, I drew on a lot on that. And I had certain struggles in my childhood, in like adolescence, that were kind of, well, the particulars were different. I’ll describe it this way: psychologists speak about there being responses to trauma, like fight or freeze, and mine was always to freeze, to close down, and keep myself feeling safe that way.

So part of it was the idea of, “what if somebody’s default position was fight?”, which is the case for Brandon. There’s an underlying emotional similarity, I jumped off and took it in a completely different direction – that part was pure fantasy. What if someone dealt with these same emotions, but the reactions were very different. Plus, having him be a fighter, also lets me explore that as a microcosm for violence in society, in the world…the sense of powerlessness that’s often behind that.

In your book, you explored how the individual sometimes feels powerless when reckoning with a higher being like God, or thinking about ourselves as a part of society. So, what can individuals do to feel less powerless?
I’ll keep my answer [confined] to the story. Brandon eventually has a mentor, Saul, and the main thrust of Saul’s work is trying to get people to understand how, far from being powerless, that they actually created their life as they know it, created the reality that they live in. Then he gets into the real nuts and bolts of it: this is what you believed, and this is picture of your life that it’s painted for you. The sessions that they do together, basically revolves around that. It gets specific to Brandon’s circumstances.

Hopefully, anyone reading that, even if their lives are very different, or their challenges are different, if they get the gist of how that process works, where you take an experience that you don’t like, and realise how your own thoughts and feelings and responses are reinforcing it, creating it, then you can change your beliefs, and your life changes. Then all the power is in your hands. It’s just a tricky process because a lot of times, beliefs aren’t recognised as beliefs, they seem like statements of fact – they create their own truth. You keep experiencing the same thing over and over again, and you conclude that maybe it’s just how life is, since that’s all you’ve ever known. The leap of faith is in the face of what seems to be true, making the conscious decision to change that belief.

This leads me to my next question – which is really the crux of your book – that loss is necessary to appreciate the joys in life. But do you feel that this is only a perspective we can gain from hindsight?
It depends on the person. Obviously when you have an unpleasant experience, it makes us kind of angry, and we have a tendency to close down, and you don’t want to necessarily know what the silver lining could be. So maybe, oftentimes, it would take a little distance, emotionally–I don’t know, for me oftentimes, it can happen instantaneously. Say, watching a really sad movie and once it’s over I feel really grateful for what I have in my life because of that contrast.

But is that because the loss is impersonal?
Good point. [We laugh.] Easier to be objective when it’s happening to someone else, but you probably wouldn’t be affected by it if you hadn’t experienced something similar.

Music is quite an important aspect in your novel. So, what piece/pieces of music would you say has taken you beyond the confines of your familiar reality?
A lot of music from the late 60s: The Doors, The Beatles, The 13th Floor Elevators. My other favourite era is what they refer to as the Seattle scene, the early 90s, Alice In Chains, Nirvana, Smashing Pumpkins — those are some of the main ones. I really could go on and on; I listen to a lot and am pretty much attracted to anything that’s extreme – really sad, or really tripped up and weird, loud and aggressive. Pretty much the only thing I don’t respond to is anything kind of middle.

Okay, so no pop music? [We laugh.]
Yeah, the laidback kind of pop, coffee house music, the kind of stuff you can find at Starbucks. Not putting it down, I just don’t respond to that. I respond to things with an emotional edge of some sort.

Yeah, I’m the basic Starbucks music kind of person. [We laugh.]
We created a new genre.

Lastly, what are your plans for the series, and will Brandon still be the protagonist?
He will. He starts out writing this memoir, that’s kind of explained in the second book. The reason that he’s doing it is to clear up a lot of misconceptions about him and the band. He figures the best way to do that is to cut through the phony press, the speculation from people who don’t really know what’s going on, is if I tell my story – how I lived and experienced it.

The inner journey that he’s on deepens, and at the same time, their audience gets bigger, so where it ends up is someone arriving at some earned knowledge, wisdom, that’s helpful in freeing people who want to be freed and reaching a lot of them too, since by then they have the ear of millions of people. I’ve actually outlined seven books, so it’s for the long haul.

READ NEXT: 10 Trope Bending Time Travel Books You Should Make Time For