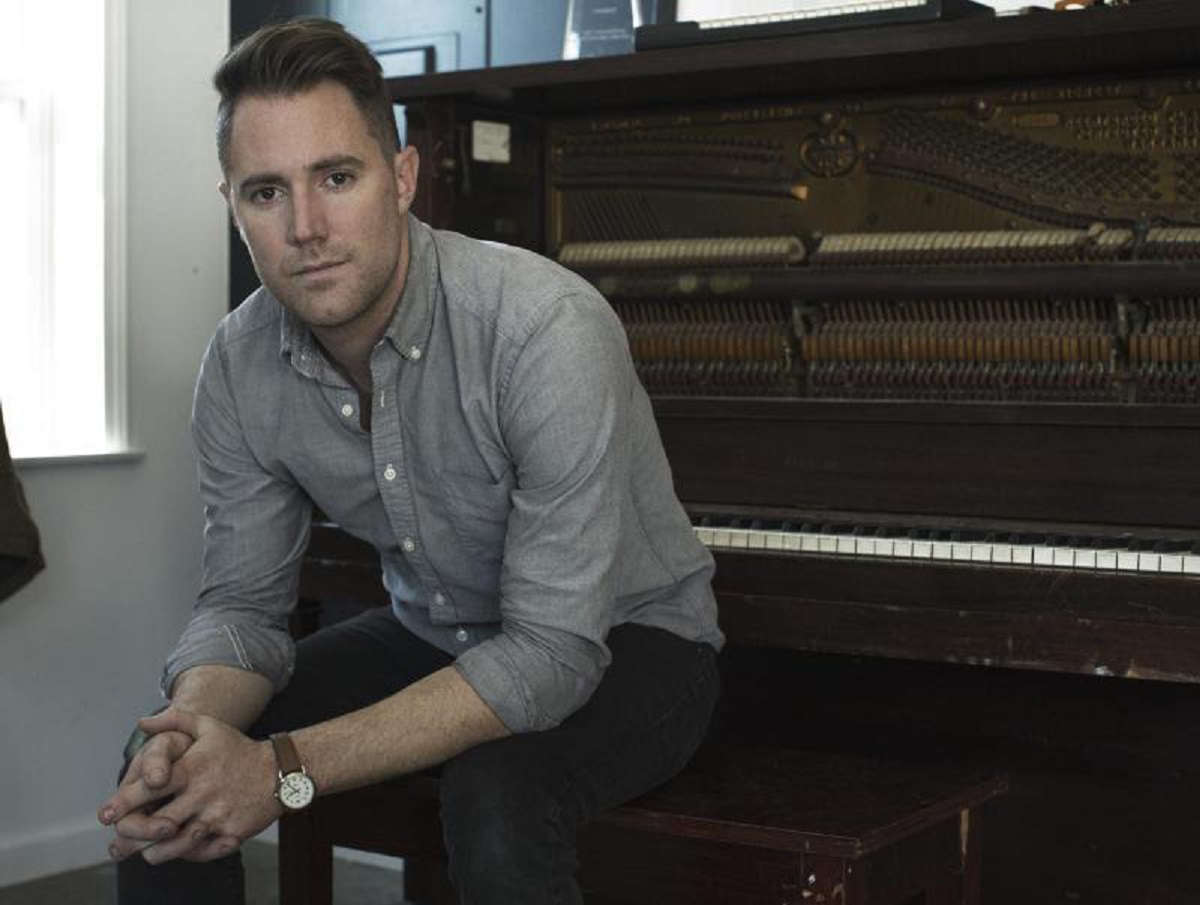 Songwriter Keegan DeWitt spoke with Cultured Vultures over the phone this week about working on Hearts Beat Loud.

Thanks for joining us.
Thanks for taking the time to talk. I appreciate it.

You wrote some great music for Hearts Beat Loud. After working with Brett on some of his previous features, was working on this film a no-brainer?
Yeah. Brett is one of those people where I have this pre-existing relationship. The great thing about having a pre-existing relationship is that you can just start working. You don’t have to do the whole awkward meet and feel each other out and understand each other’s instincts. At this point, we just get it. There’s a cool amount of trust where we’re able to just get started, which is really refreshing and nice. It also–on more projects where I’m hired on and don’t have a pre-existing relationship, I spend a lot of time doing that. I feel like the creativity of the project can suffer a little bit because you’re spending so much time trying to please everybody. With Brett, it’s nice because we can just kind of get in there, be excited and surprised by what we come up with.

When I saw the film in January at Sundance, I couldn’t wait to get the soundtrack. I saw again during SXSW.
That’s great!

Which songs were written for the film and which were previously recorded?
I had “Hearts Beat Loud” in sort of a raw version that I had kind of messed with as a singer-songwriter. Brett had been—we had always been friends at that point. He had all the different things out of my—he had raided my hard drives and had a bunch of different music. That song—as soon as I had it and was kind of messing with it even in an intricate form, he was excited about it. I think that’s when the idea started to cede for him. At that point, I was a lot younger and he was in a different point in his career so we couldn’t just make the movie we wanted to make. So that and “Shut Your Eyes” — the song that Nick plays on acoustic — that was one that I had kind of hashed as a raw idea. The two that we really brought from total scratch on the project were “Blink” and “Everything Must Go.”

At Sundance, were you kind of paying attention to the reaction? I remember you played during the Awards Ceremony.
We played during the Awards Ceremony but Sundance is always strange. It’s a totally weird world. A lot of things can seem big and exciting or picking up steam there and then suddenly, you cut to a year later, you didn’t even know it came out and it shows up on iTunes. Also, I think for part of one of the creative people in it, I never try and phase that much whether people are responding. It’s more whether if it works in the life of the film. For me, for example, there’s a moment early on where Kiersey —- it’s as they’re composing the song, “Hearts Beat Loud.” She’s plays on the keyboards and sings, “Your heart is what it is.” I just remember Kiersey was sitting right behind me and I just squeezed her leg. We were both going like, “Yeah, that’s great.” I felt like at that point, I was more excited to be in a dark theater and going, Right, okay, it works. There’s real emotion present here.

Have you ever acted the way Nick Offerman does in the film when hearing your song over the loud speaker while ordering food?
{Laughs) I haven’t but I know that feeling. Especially with my band, there would be a lot of funny moments where I’d be like—the band that I was in, Wild Cub, We had a song that was on the radio for over a year. It was a somewhat big song. It would be funny because I’d be shopping with my wife in Anthropologie and then suddenly, my song would come on, which would be very funny. Or you’d be sitting in a Sbarro somewhere. It’s always a funny feeling when the server comes up and is like, “Can I get you something to drink? You want to be like, “It’s me!” but you can’t unless you’re Nick and then people are charmed by it.

How did you get interested in songwriting and film music?
I went to a fine arts high school. At the time, I was always playing music. I was excited about music as a really small child—learning piano, learning guitar, and a lot of playing in punk bands as a teenager. During that whole time, in parallel, I was going to this fine arts high school to hopefully write for stage and film. I was hoping to write screenplays and stage plays. I was best friends in high school with this guy, Aaron Katz, who’s a director that I just did Gemini with. I went to film school to be a filmmaker and he did the same. He called me one day and was like, “I know you kind of do music. My film got into SXSW. Would you be into doing music for it?” Similar to Brett, he had always–I don’t know, there was like this weird black market for my crappy four-track demos that I was making. I was just always making music on the side. I would just keep a journal or something like that. I would just write these songs and would record them on a cassette four-track or stuff.

Somehow, because everybody went to the same college — North Carolina School of the Arts — there were all these directors who were swapping around mp3s and had these songs and stuff. That includes Brett and Aaron. Aaron was the first out of our group to get into the world of actually getting his film seen. He had his film and was like, “Do you want to try and do the music for it?” I sort of did. We just grew together from that point. I fell into the idea of composing for film. I actually am really grateful for the world in which I came from because it makes me approach scoring music in film in general as a filmmaker rather than just a musician in a vacuum. Sometimes I feel like on a set or dealing with specialists, you feel like it’s hard to get them to calibrate and look at the film at the whole. They’ll be like, “I don’t know, we’re doing this really interesting thing musically or visually.” I feel like a lot of directors struggle with getting these people to take three steps back and look at the macro of things. I feel like it’s one of the assets of me as a composer. I’m certainly not looking at as a director but looking at it more in how things work in the film thematically and narratively and trying to think of music as the same thing as how you would use light, blocking, or something like that.

What is your songwriting process like?
My songwriting process can sort of vary up and down. For myself or even for the original songs that we did for The Hero or I’ll See You In My Dreams, those are little more private and can be more straight-forward where especially because they’re topical lyrics, I’m sitting down to write something personal. For this, it was more difficult because the band I’m in — Wild Cub — had just spent a year and a half recording a record. When Brett showed up and was like, “Hey, we’re going to do this. We’ve got to write a bunch of songs.” I definitely felt like I had an empty barrel in terms of ideas so I just started creating as much as possible. Brett was really good about it. I’m usually extremely fast and he’s pretty fast in how he works. It was taking a long time. I was getting a lot of late night texts from Brett like “Hey man, just checking in. Let me know if you have anything.” So finally, I just folded and said, “I don’t know what I’m doing over here. Let me send you this giant folder of stuff.” I sent him like thirty song ideas. Thankfully, in there, within like an hour, he called back and said, “This Blink song is incredible. Let’s do that.” We knew we had that one. There was a song that was just an instrumental, a raw bit that was the beginning of “Everything Must Go” with the steel drum loop and the guitar changes over it. He was like, “This is cool. Whatever it is, let’s finish that. That’s the thing.” Luckily, somewhere in there, we found something.

What other projects are you working on?
Right now, I’m starting a TV show with Elizabeth Olsen and directed by James Ponsoldt, who did The End of The Tour and that’s for Facebook. That’s exciting. I’m working on the new Alex Ross Perry film with Elizabeth Moss, Cara Delevingne, and Amanda Heard. I’m working on another film with Lola Kirke and Ben Platt, who did Dear Evan Hanson. I’m excited about that and everything else just kind of — there’s a couple pending whether I want to. This is right when it starts to get really crazy because everybody’s trying to finish their movie for Sundance and things like that.

Thanks again for your time, congrats on the film, and I cannot wait to buy this album.
Awesome! Thank you so much for taking the time to talk.

Following its world premiere during the 2018 Sundance Film Festival, Gunpowder & Sky will release Hearts Beat Loud in select theaters on June 8, 2018. A theatrical expansion will follow.