Something which has always fascinated me about art, in any form, is the often stark disparity between how the artist interprets it and how the audience interprets it. How the artist then reacts to that response then becomes crucial, it shapes the way their career continues. If you’re talking about Obaro Ejimiwe, aka Ghostpoet, he just carries on doing what he wants to do and, given the amount of success he continues to enjoy, he’s clearly doing something right. After garnering a Mercury Prize nomination for his first LP Peanut Butter Blues & Melancholy Jam, he went on to tour globally, release a second album in 2013 and now a third, Shedding Skin. If you read reviews for this or any previous album, you’ll find a common thread of critics attempting to generically define the music but the man himself doesn’t see his work in those terms at all, as I discovered.

I hope to just keep doing what I’m doing and I’m pleased with the results so far.

I went to meet him at The Hare and Hounds in Birmingham a few hours before he was due to be on stage. It’s familiar ground for me, it was my most frequent haunt when I was living there and past interviews and friendships mean that I know the backstage area pretty well too. Despite being so close to getting up on stage, Obaro was calm as they come, totally at ease with his surroundings, but I guess after about half a decade of recording and touring that should come as no surprise. Apparently though even back when the first album dropped, Obaro started to settle into that mindset. “It was all the travelling and gigging abroad and meeting people who had listened to my record,” he says. “The kind of mental freedom that making music has given me, changing my personality and my confidence. I guess that’s when I started to think there could be future in it.” But is it any different now, certainly he’s steadily become more well known, but has that had any bearing on his process? “I’m not really aware of wider acclaim, maybe that’s part of the reason why I haven’t felt any need to change, in the lyric sense, I still talk about feelings and emotions and I’m still talking about the world around me. The only thing that changes for me is that I like to make a record that’s in the moment, of the time, so this one would have been over the course of the last two years or whatever, same with the record before that and the one before that.” 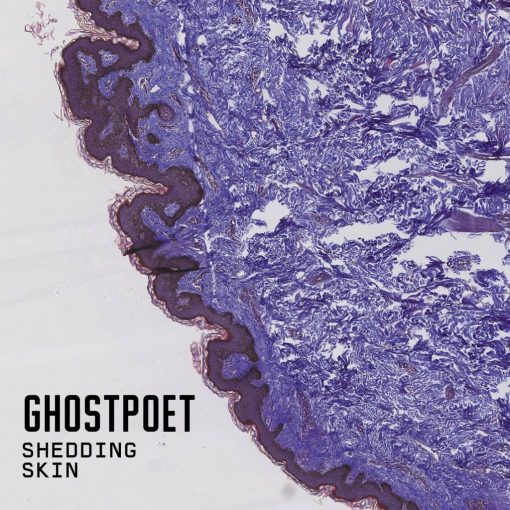 Shedding Skin does have a different flavoring to it than Peanut Butter Blues & Melancholy Jam or Some Say So I Say Light, there’s a considered, observational feel to many of the lyrics which is perhaps more evident than it was on the others. In a live context though, it coalesces seamlessly into the older material, despite being much more heavily weighted towards acoustic instrumentation than electronics. That part was definitely by design. “I decided this time to put the electronics on the back-burner so to speak and make a record that was fully-fledged acoustic,” he explains. “It’s a direction change but I wouldn’t say it’s different from the rest. The band is really just made up of the guys that I tour with. My drummer John Blease, my bassist John Calvert who co-produced the record and a friend who’s played with me on and off over the years, a guy called Joe Newman on guitar. It was great to work with people that I know, they’re all friends of mine.”

I had never seen Ghostpoet live before that night, but having now done so I can confirm that it’s a winning formula, you could see how attuned the band members were to each other and the crowd became completely absorbed in the experience, some choosing to dance and others preferring to keep themselves fixated on the stage like statues. As a recording process, Obaro found it not only gratifying to work with such familiar faces, but productive. “It was quicker to get to an end result because they knew the things that I had in my had and the ideas that I tried to explain that I wanted to get done. It wasn’t me trying to do it myself, painstakingly over a week, it was done in a matter of minutes,” he reflects, stroking his beard. “It was on my mind when I was making the record to make something that worked much more easily live, more digestible, easier to get into.” As far as the actual conceptualizing is concerned, Obaro did with this LP what he has always done, absorb the world around him and reflect it back through his prism. His lyrics on Peanut Butter were praised for their honesty, realism and darkness and it’s a similar story with Shedding Skin. “I try to put myself in different kinds of prescriptive, so it could have been something that I’d been told or something I’ve overheard which I’ve then elaborated on but it’s all centered around truth.”

This is particularly evident with the opening track, Off Peak Dreams, which coupled with the video outlines the cyclical nature of the daily 9-5 grind, something Obaro has plenty of experience with. “Currently I’ve done a 9-5 more than I’ve done music, that life is still very much in me so I wanted to reflect it, I wanted it to be as real as possible. That was really important because the visuals aspect is one of the main ways that people listen to music nowadays, through YouTube and Vimeo and that.” The video chronicles a day in the life of a man working in London, from waking to commuting to working to drinking and back to the start. It was made using what amounts to the average monthly wage in the UK, a fascinating idea that has gained a lot of attention. “That was an idea that I hoped would be talked about and I get asked about in every interview, so it’s done its job.” Obaro actually comes from a somewhat more visual background, having taken a degree in media production. “I wanted to be a video editor. It was something that I really wanted to do but I could really get a break” He says, speaking as if he’s opening up some pretty dusty doors in his head. “I’ve always been very aware of all the different aspects that make a record, the artwork, the videos and the visuals as well as the music itself. I’m trying to squeeze as much creativity out of each of those aspects as possible. I’m definitely aware of it but I don’t think my degree has directly affected what I’m doing.”

It’s this kind of unique blend of ideas and processing that makes Ghostpoet so hard to pin down in generic terms, but that’s far from a bad thing. Obaro himself would rather stay as far away from those parameters as possible, at one stage I offhandedly mentioned hip-hop but he was understandably unwilling to travel down that path, his music doesn’t fit that description, despite his albums often being shelved as such. “I don’t want to be confined by genres or opinions or reputation or whatever, I don’t give a shit, I just do what I want and I say that in the nicest way because I think it’s important to be creative and to do that you can’t be restricted, you have to do what you need to. I hope to just keep doing what I’m doing and I’m pleased with the results so far.” He says as we get back on track. “Even in the experimental times that we’re in with music with so many genres being amalgamated and mish-mashed, people are still relying on genres and offshoots of them to understand things better. I know that it’s just the natural thing for me to do is just to make whatever and I’m surprised that people still want to hear what I’m doing after 3 records.”

It surprised me somewhat to hear him say that, his work has always appealed to me and seeing The Hare and Hounds packed to the gills with fans later on that night only compounded how wide his voice reaches. His storyteller style vocals are pretty much unique and when he’s mere feet from you with mic in hand it’s utterly mesmerizing. “Obviously I care what people think because if I didn’t I wouldn’t release records professionally. I’d just put it on Soundcloud or Bandcamp and be done with it.” He explains, and I’m certainly glad of it, as are many other fans almost the world over. “I try to avoid thinking of myself as a London musician because I’m very fortunate that people around the world listen to my music, it may not be on a massive scale but it’s a global audience, I am a Londoner and love that fact and it does feel like a laboratory but so many places have the same kind of vibe. You’ve got Birmingham, Manchester, Glasgow; Dublin’s doing stuff. You’ve got so many places where things are going on and I think people are looking to the UK to find and be inspired by music.”

There’s a great deal to be said for having the wherewithal to just do what you want regardless of what might be happening around you and it’s evident in everything Ghostpoet does. “Ultimately I’ve got to make a record for myself.” He says, half-smiling. “I’ve got to do what’s best for myself.” Even when the show was drawing near to a close he forwent the usual encore formality of walking off and then back on and launched straight into the closing tracks. Bearing in mind how staunchly focused he is on doing what comes naturally, on following his own rhythm, I was interested to know what else Obaro had planned beyond Shedding Skin. “I have lots of ideas for work with other artists and I’m just trying to get some time so I can work on that. There’s stuff that I wouldn’t want to do as Ghostpoet, I want to go to extremes in different directions.”

[Tweet “”Ultimately I’ve got to make a record for myself.””]

Ghostpoet will be touring Europe up until the 21st of May. You can get a copy of Shedding Skin here.