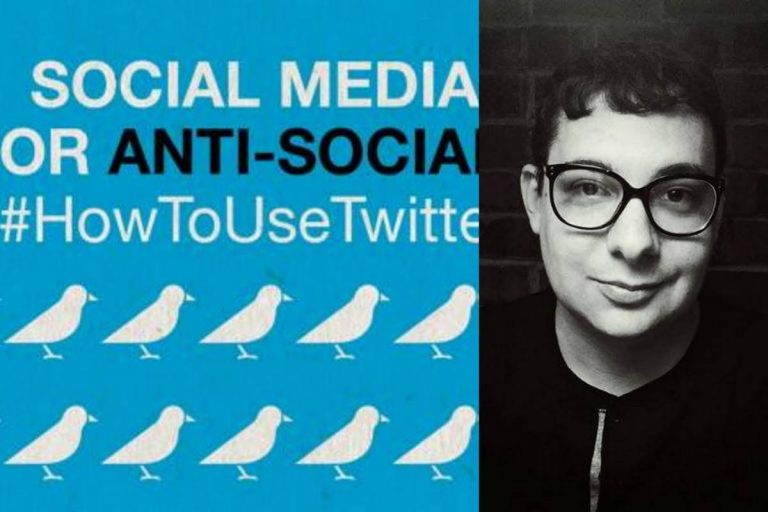 We recently read and enjoyed Christoph Paul’s guide to social media. Since then there were a burning few questions about how this maestro does it, and how he does it so well. Christoph could sense those feelings through whatever creative antennas he has, and was kind enough to indulge us. Make sure to check Christoph out, and explore the great writing and wisdom he has to offer.

After having a novel published, did you find it difficult approaching the creation of a nonfiction book, or did you feel that it gave you more experience to draw on?
My first book “The Passion of the Christoph” was a mix of non-fiction and fiction. I wanted to draw on the voice I used in Passion and expand on it for the Twitter book. I can say after having a few books under my belt, that the more books you write, the easier it is to finish stuff that is outside of your comfort zone.

You talk about other social media apps in the book such as Tinder. What do you think would be the worst way to market your book?
Spamming or bringing up your book in every conversation. It’s so god damn annoying to see authors do that. You look like the high school virgin whose whole purpose in life is to finally get laid. You still need to let people know you have a book out, but communicate it to them in a way that would make them interested in your book. If you can’t communicate to your audience, and just spam instead, you’re just going to lose future readers.

You also give some very important advice about dealing with trolls. Is this something you’ve encountered, and have you seen people fall victim to?
A big thing I stress is to use Social Media efficiently. If there is anyone who is going to make you spend a bunch time arguing and bullshiting about bullshit, then step away. Facebook is way worse than Twitter because you can spend thirty minutes writing a response to an argument instead of getting actual writing done. I get trolled a lot, I just don’t respond. “Ain’t nobody got time for that”, is probably the greatest piece of wisdom of the last 5 years.

You’ve also had a Bizarro novel published this year. Tell us about that, and what drew you to the genre and if it was different than your writing before.
I love reading and writing Bizarro Fiction. I think what is cool about it is you can approach the genre from different angles and influences. Bizarro Fiction is a big tent. Why Bizarro appeals to me, is to paraphrase Brian Keene, Bizarro Fiction writers are the genre fuckers. That is what I love to do, I love to take genre and turn in on its head while still telling an entertaining and well-crafted 3-act story. With my latest one from Eraserhead Press, “Slasher Camp for Nerd Dorks”, I am drawing from Dystopian YA, Satire, and Horror, and twisting those genres into a WTF tale. It was a lot of fun. I have done that same with erotica under Mandy De Sandra. Yes, it’s technically ‘erotica’ but it’s weird as fuck, I am really just using the erotica template to write weird fucking stories that make me and other readers laugh. It is Bizarro Fiction Erotica.

Speaking of publishing, your erotica has been carried by lots of online outlets.
How does it feel when such high levels of attention get paid to your work? It’s great man. That damn Kirk Cameron Crocoduck of Chaos Magick book changed my life. I was a musician before I was an author, and I’m seeing that writing just like music in that you need a break out hit to really build a fanbase. The erotica stuff has done that for me. It was a crazy experience to see all of the media talk about me for a week. It’s really fun when that happens now with Mandy’s new books, even thought so far, nothing has beat Crocoduck in that level of media attention.

Back to social media. For readers that haven’t read it yet, how do you justify the balance between marketing yourself and being a genuine artist?
The irony is people are less likely to respond to you if you aren’t being genuine. With marketing and being genuine, it is all about communication. Communicating and trying to connect is a genuine act. I’ve noticed that a lot of artists have this very all or nothing attitude when it comes to marketing—if I’m marketing my book in a way that is not 100% true to my soul, then I’m not genuine. That is silly, privileged, and immature. I really think people should look at marketing as communicating effectively and instead of weighing their soul’s intent.

There was a strong element of humour in Social Media… did you find it difficult to approach this subject with humour or is it something that happens naturally in your writing?
I think it will be a challenge for me is to write a book that doesn’t have humour that doesn’t suck. I am a humourist. My first book “The Passion of the Christoph” won a humour award and I just kept on writing funny shit. I felt that to write a Twitter and marketing book, which is a lame ass book idea, it had to at least be funny.

You also talked about how social media can trickle into someone’s real life, like with romantic exploits. Is Twitter truly a way to find people to date and connect with in real life?
What’s funny is I met my girlfriend on Facebook, but I’ve met one-night stands on Twitter. You probably could date through it. It is a great way to show intelligence and sense of humour. Many people complain about it being 140 characters, but a concise smart sentence is sexy.

Is there a significant difference between your online and offline persona?
No, and I like this question. I see a lot of people say that being online turns them into the asshole, and that is bullshit. The truth is you’re probably just a fucking asshole, but you are too scared and lack the balls to be that way in real life. I’m the same in real life as I am on Twitter. Leza Cantoral can confirm this.

What does the future hold for Christoph Paul?
A lot of writing and shopping manuscripts. I’m finishing a YA book for my agent, a sequel to Great White House for Clash Media, a poetry collection about Horror Films, a Bizarro Cosplay novel, and novella titled “A Confederacy of Hot Dogs”. And that is just my stuff. Mandy is always busy with new projects as well.