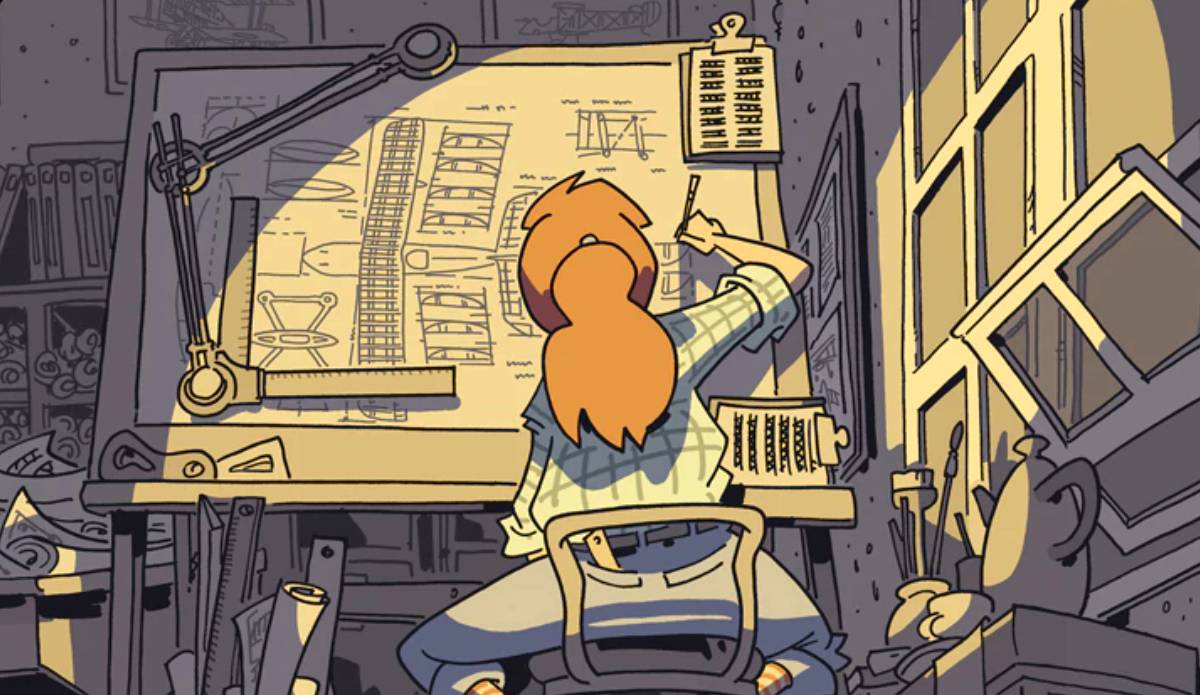 Chris Schweizer is an Eisner Award, YALSA, and Stumptown Award-nominated cartoonist who lives in Madisonville, KY, where he spends his time making art and researching events and figures of historical interest. He’s published a series of all-ages historical adventure graphic novels called The Crogan Adventures with Oni Press, and is known among fans of all things spooky for being the artist/writer behind The Creeps.

Settling down for our Skype interview, I take in Schweizer’s surroundings as he begins to talk. The room is decorated with framed artwork, a miniature camel and–reminiscent of the gentle backdrop of a YouTube vlogger–a few strings of fairy lights. We begin by talking about our own pasts, and I ask Schweizer of his early life, and the artistic influences of his parents: “My parents were both classical musicians,” he says, “when I was about three, my Dad decided to stop touring to spend more time with the family, and so he took up positions as a choral director for a Episcopal church, and also as a music professor for a local college in Louisiana. I spent a lot of time in the Fine Arts building at this college, just wandering in and out of galleries and the theatre. Every once in a while to, y’know, probably shame a poor undergraduate who hadn’t memorised their lines, I’d get called up by the director to recite them in their place,” Schweizer tells me, laughing, “So y’know, I’d be six or seven, standing on stage and performing…and I really loved it. I loved that environment.”

But along with this emerging passion for everything artistic came the more sobering reality of the amount of work required to make a living as an artist: “As well as being a director and a professor, my Dad was also a publisher, publishing mainly choral music,” Schweizer explains, “so from an early age, I recognised that you could have a career in the Arts, but you’d have to put in dramatically more hours than you would at a 9-5 job. The trade off of course being that you got to do what you loved doing, for a living.”

Whilst talking of our own histories, we broach the subject of wider world history, and Schweizer explains to me that, to him, the darker and more complex parts of history can also ultimately be the most comforting: “I like looking back and realising that the human condition has, more or less, remained unchanged,” he explains, “especially when it comes to politics…these are issues that people have dealt with before, and have dealt with in a way that seems successful, at least to me. And that gives me a great deal of comfort. It’s also helpful for me to be able to trace the origins of things: events, thoughts, interpretations…you know, a lot of history isn’t telling us so much about what happened in a particular time period, it’s telling us more about ourselves, in how we interpret a particular time period.”

One of my favourite things about Chris Schweizer’s historical work is that a lot of it is often focused around people in history who aren’t as well-studied as they should be; his “Warrior Women Wednesdays” series being one great example of this. I asked Schweizer to explain quite why it is that his work concentrates so much on people who aren’t anything like him, in terms of physicality and self identity:

“What I think is really important is a lot of folks who feel underrepresented in a lot of texts that discuss history–whether it be women, LGBT folks, people of colour…kids, even, I think kids get a short shrift so far as historical notice goes–I think it’s important to showcase to them that those people had just as vibrant and important a place in pretty much every period of history and every region that we can think of,” he tells me, “I think that allows audiences that may not have seen themselves reflected in history, aside from perhaps in some very limited and specialised roles, to realise that the world is full of their history just as much as it is my history. And if that gets them excited about studying more, if that gives them a richer sense of self-identity, that’s huge to me. I think that any time I learn about something like this–something about someone else’s history–I feel like it’s my responsibility to share that with as many people as possible. I do think that can make a big difference to a person’s interest in history, as well as their sense of belonging, wherever they may be.”

It’s not too long before I bring up the topic of Star Wars–one of mine and Schweizer’s shared passions, despite my relatively recent foray into George Lucas’ playground. After recommending that I watch the second Ewok movie, The Battle for Endor, and letting me speak at length on my love for Donnie Yen, we get onto the topic of the Topps trading cards, an assortment of which Schweizer has been asked to draw for Lucasfilm and co. “I love Star Wars, but my favourite Star Wars film is the one that exists inside my head,” he says, laughing, as I realise Schweizer is probably echoing the words of every Star Wars fan in existence, “I’m really excited to get to do something in an official capacity. They sent me a small list of rules–the characters have to look like how they do in the movies, that kind of thing–but they gave me a lot of freedom too. I’m pretty excited to get to tackle them!”

As well as his professional licensed work, Schweizer also recently opened a page on Patreon–a website dedicated to creators of all kinds of art and other regular content–where backers can pay a desired amount of money each month and receive a variety of rewards in turn. Schweizer’s backers receive rewards such as original art, paper figure sets (including a Patreon exclusive figure) and downloads of his previous sketchbooks, as well as other fun rewards like money off of purchases from his online store and access to a weekly “behind the scenes” style newsletter.

“The things I make for Patreon are all things that I want to do”, Schweizer says, “and the Patreon gives me permission to do them, without feeling like I’m neglecting other work. The paper figures and the other historical things, those are all things I really want to spend time creating, and hopefully other people want them as well! There’s enough people downloading them and supporting the Patreon that I hope that’s the case, but it’s one of those things where–and this is something I’m currently fighting, existentially speaking–is it better for me to reach a wider audience, by doing something that is a little more accessible to that wide audience? Or is it better for me to do work that is of intense interest to me, but that may only reach a limited number of people? It’s something I’ve been thinking about a lot lately, but Patreon at least allows me to spend time working more on the things I have a personal interest in.”

The topic then turns to something decisively more cheerful: death. As artists, we will never know what our final piece of art will be. We never know which pen stroke will be our last, and the idea that art can be immortal where artists cannot is some of what drives Schweizer to make every piece of his artwork the absolute best it can be:

“I think a lot about each project that I take on, and if it’s going to take more than a few days to complete, I look at it as: “Is this something that will have been worth my time, after I’m gone? Is this something I’ll be proud to have on my bookshelf?” If not, then it’s not something I’ll take on,” he says, and patiently listens whilst I prattle on about Hamilton’s philosophical questioning of not knowing who tells your story after your death. “As a result,” he continues, “the ones which most catch my interest are the historical projects. I feel like history as a genre unto itself has more shelf life than a lot of other projects. You know, you have rises and falls with other genres, but if you look at what’s stuck around, a lot of that stuff are either contemporary pieces which embodied their time period, or historical fiction. I don’t have a ton of interest in tackling contemporary stuff but there’s something about the alien quality of history that makes it kind of the same as tackling Star Wars, or something fantastical.”

Unfortunately, having passions for things which often fall outside of what is considered easily marketable is a problem when it comes to funding: “I recently pitched a book to a publisher, and it didn’t work out,” Schweizer explains, and I realise how little artists talk about the rejections and pitfalls they so often face, perhaps because of how often we’re conditioned to think of artists as “overnight successes”, “they’ve been looking at it for a while, but they turned it down a few days ago. They’re great people, and there’s no bad feelings on my part, it just wasn’t feasible for them, in the end. Historical fiction, as a rule, doesn’t sell, and so it’s difficult to get a publisher to front you an advance when, statistically speaking, it’s unlikely to make back that advance. Finding people to pay me to do the things I love, that’s the tricky part. Is it better to take up a day job, and focus on the books I want to make? Or is it better to focus on books I don’t want to do quite as much, so I can focus on drawing for a living? Finding that balance is hard.”

Overall, my conversation with Chris Schweizer left me thinking about what we leave behind in the world, and how the need to make a living can often alter our creative outputs and endeavours. It seems strange to me to make the conclusion that I’d rather see my favourite artists secure in terms of employment and finances than I would see them create more art that benefits me as a consumer who enjoys particular things, but that may be in part due to my own anger at the continual romanticisation of the “starving artist”. Whatever happens, I’ll still be here, cutting out little mountain men paper figures and standing them up on my desk as I try to figure everything out.

To find out more about Chris’ work, you can follow him on Twitter or Facebook. You can also pledge to his Patreon page by clicking here. If you’re interested in the full Porco Rosso image used as the header, you can purchase a print of it here.