Conversation includes spontaneous combustion and what kind of music to dance to in a barn. 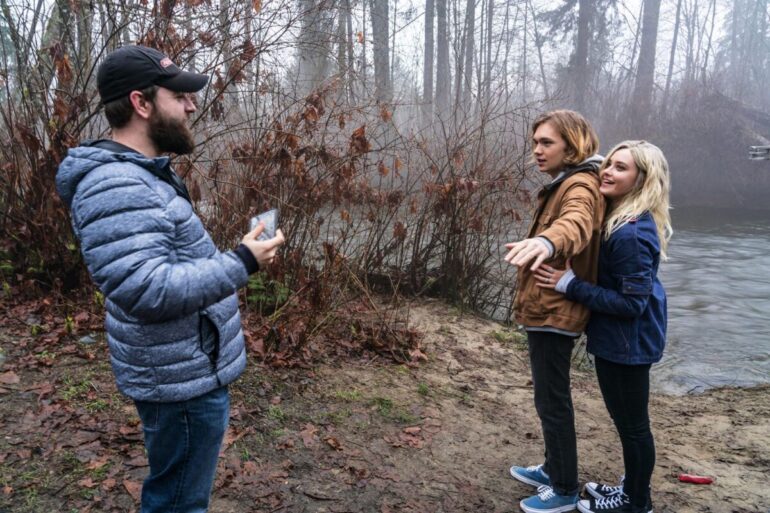 I sat down to speak to writer/director Brian Duffield about his new movie Spontaneous. Duffield, known for his work as a screenwriter on films like Underwater, Insurgent and The Babysitter, delivers a darkly funny tale that will resonate with viewers as they try to navigate today’s uncertain climate. In the film, high school seniors find themselves exploding spontaneously (hence the film’s title), with no explanation as to what’s causing this and how to stop it.

As they struggle to survive in a world where each moment may be their last, an unexpected romance blossoms between Mara (Katherine Langford) and Dylan (Charlie Plummer), who discover that when tomorrow is no longer promised, they can finally start living for today.

Congratulations on the film! I watched it, really loved it. I know everyone is probably saying that.
I don’t think everyone’s saying that. [We laugh]

It made me cry! It was really very good.
I’m sorry! But I’m also really happy about that.

Spontaneous is your directorial debut. Take me through the highlight reel as a first-time director of a feature film. What were the sweet highs, or the absolute lows?
Naturally, working with the actors, working with Katherine, Charlie, Hayley, Rob, Piper, Chelah, Yvonne…it is a very long list of people. They, you know, made me look good. [We laugh] Some of the loveliest people to work with – that aspect of it was the most fun. Especially Katherine, because she is in every scene of the movie, I grew to value her, as much a creative part on the movie as anyone I worked with. Katherine was really special, someone I really cherish. Also, working with all the blood and all the action stuff, it was really thrilling to finally get the chance to create some fun action set pieces.

I feel a little dramatic talking about this, but after we went into production, the company we were working with, like the whole studio was sold. So, for a long time, we weren’t sure what might happen to us. People got laid off. There weren’t any negative reactions to the movie or anything, but we weren’t sure if we could do post on the movie. I think we had a nine to ten months gap, in the middle of, as a lawyer figured out who owned the movie.

That was frustrating, and like in the movie, we had no control. In this bizzarro way, we felt like we were learning the lessons of the movie while being in post for it. You know, cosmic bullshit that we’re not in control of, corporations merging and whatnot. Nothing negative happened to the movie. The studio came in and changed things, and we figured out who owned the studio, and therefore owned the movie. But yeah, it’s coming out soon, so I’m thrilled.

Spontaneous involves a bunch of high school seniors spontaneously exploding. Is this a conceit for mental health struggles, the volatility of being young, or is it meant to reflect the larger uncertainties of life?
I think you hit the nail on the head. Katherine, Charlie and Hayley and I talked a lot about making sure all the emotions in the movie worked, and they still worked if you talked about spontaneous combustion and replaced it with, god forbid, a virus, or whatever bad, traumatic event people go through, the emotions of the movie and what Katherine’s character goes through would still feel authentic and real. We talked about how it’s kind of like The Fault in Our Stars, but with people exploding instead of having cancer.

I think one of the nice things about it is that the movie isn’t so much about why is it happening – it’s an unanswerable question. It isn’t fair, it isn’t solveable. It’s important as I think it gives people the ability to have it be about whatever they believe it to be about. You could project whatever you feel is real into that, and how the characters react, and what is being taken away at the end of the movie. That was something Aaron’s novel did beautifully, and what attracted me to it.

As a high school story, it makes so much sense. Katherine’s character has a year left of a perfect life that she’s kinda crafted for herself, then she goes on off to college, and does all these different things, but you know, things are going to change no matter how much you don’t want them to.

Do you feel that you will always direct your own screenplays?
Oh yeah. [We laugh] As a writer, it took me a while to learn, not to write as much, but to have the confidence. I was young when I sold my first script, and even just acclimating to being a professional writer took me a minute to wrap my head around. So, I felt I needed to grow up a little bit, be responsible, understand the directing part and the end of purchasing side. Once I felt that I had a solid foundation, it was just a matter of timing, to get a movie that was representative of all the things I wanted to make movies about. So, when I got Aaron’s story, that’s exactly what it was. It was a tonal mishmash, ambitious, there’s nothing else really quite like it. [We laugh]

I would say so.
It was lighthearted and hopeful, not like a downer Sundance kind of thing, and I loved that it held what I wanted to do, and I wanted to say – the coming out party, I guess. I’m very thankful that Aaron wrote the book.

I noticed an E.T reference in Spontaneous, which was also referenced in The Babysitter. Is this a coincidence, or do you just really love E.T?
I do love E.T! I think it’s a coincidence. Honestly, I can’t remember if it’s in the book. It’s such a striking thing, I mean, once you’re in that place (containment facility), how could you not think it’s about that (aliens)?

Katherine’s character doesn’t really feel the issues in the movie, she’s always trying to push them down, and she’s just been through something traumatic. It’s also the first time she sees Charlie’s character start really breaking and struggling with what’s going on. So, we see Katherine’s character kind of giving him a pep talk, and helping him process and deal with it.

In the film, Charlie Plummer’s character Dylan speaks about listening to Springsteen and Bon Jovi. So, I guess my question is, what type of music would you dance to in a barn?
Oh, that’s a fun question! It would probably…be Springsteen, I think. At time, there was that movie, Blinded by the Light, and he also had his Broadway show, so there was so much Springsteen happening at that moment. I love the songs he has out there now, so if I had to, yeah, I would say Springsteen. You asked me a tough question.

Last question: What’s the status of Vivien Hasn’t Been Herself Lately?
There’s been in a bit of a lull actually. I don’t think it will be next. I became close to doing it a couple of years ago, but schedules of some of the actors got moved around, and things fell apart a little bit. I love that project and I’m dying to get to it, but I don’t think it will be the next thing I do. At some point, if the urge still exists, maybe three to five years, I would love to come round to it again.

I don’t have any intention of going back to just writing anymore. Everything I’m writing is for me to direct at this moment; that’s definitely the trajectory I hope I’m on.

I’m wandering the desert, hoping for the launch of new productions. In the next few months I’m hoping I’ll have something, so till then, knock on wood.

Spontaneous will premiere at select drive-in theaters on October 2, 2020. It will be available on VOD and digital platforms October 6, 2020.