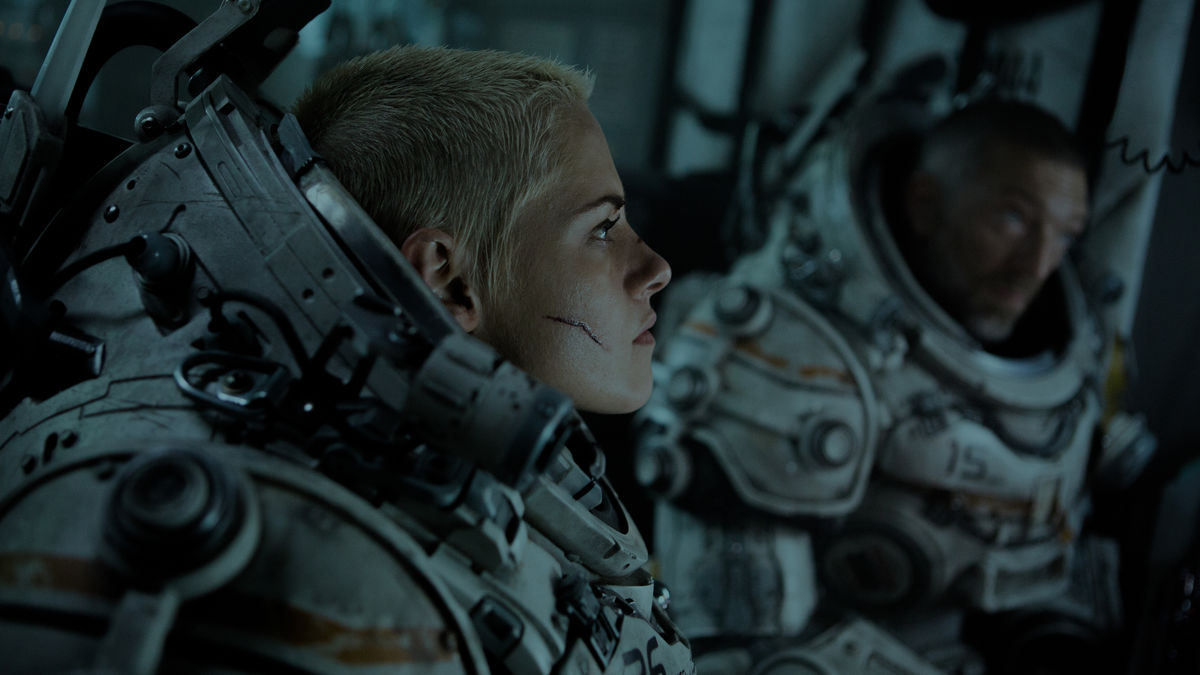 Few things are as terrifying as the endless abyss of the ocean. A dark expansiveness that suffocates the senses and fills the belly with apprehension. And now imagine that black emptiness is filled with Cthulhu-esque creatures hunting you.

Director William Eubank, and writers Brian Duffield and Adam Cozad, have crafted claustrophobic oceanic terror through creative creature design and a dread-filled atmosphere. Underwater promptly drops viewers into its world, mere minutes before knocking them on their backside.

The Kepler drilling station is tasked with digging seven miles beneath the ocean’s surface. The station is suddenly thrown into chaos by a destructive and mysterious earthquake. As the surviving crew takes preemptive measures to secure the integrity of the facility, they are suddenly faced with a horrifying reality: Something has awakened on the ocean’s floor.

Our gateway into the film’s world is through the lens of mechanical engineer, Norah Price (Kristen Stewart). During Norah’s traversal of the now dilapidated facility, she meets up with the Kepler’s captain and a motley crew of survivors.

Given the inherent loneliness of the isolated setting, a decent chunk of the film is spent establishing the crew’s relationships. Most notable of the team are Captain Lucien (Vincent Cassel) and Paul Abel (T.J. Miller – Underwater was filmed prior to an accusation of sexual assault). Enough time is spent developing these characters that they never feel as if they merely exist to serve as creature fodder.

Captain Lucien is the highly respected rock of the crew and Paul provides a continuous levity that humanizes their shared struggle. Norah being the Swiss Army knife as she adapts to and overrides any obstacles standing in their way.

The remaining crew members are deep-sea love birds Emily (Jessica Henwick) and Liam (John Gallagher, Jr.). Their relationship initially seems narratively superfluous, but in fact, they fuel much of Norah’s drive. Given her openly cynical mindset, she finds reasons within the crew to continue pushing forward in the face of opposition.

It should be no surprise that Kristen Stewart has the standout performance here. Norah’s arch from cynical loner to leader and tactician is smoothly implemented. Her rise to face seemingly insurmountable odds is well-paced, ensuring that she grows into her role. She comes to be a badass underwater heroine, rather than feeling like an invulnerable superhero right out the gate. Norah is merely adapting to being between a rock and a hard place; that hard place being Eldritch hell.

Before evolving into a full-blown aquatic creature feature terror, Eubank establishes the morose and suffocating atmosphere of the Kepler station. Every leaky pipe, flickering light, and condescending workplace safety posters, further establishes the station as an inhabited locale. Much like how Ridley Scott made Alien’s Nostromo feel like an organically inhabited environment, the attention to conveying the claustrophobic innards of the Kepler is equally resounding.

Once leaving the cramped station interiors, the film preys upon the viewer with the new nerve-wracking terror of the endless void of the seafloor. And despite the spaciousness of this environment, Eubank snuggles the viewer into each character’s deep-sea chassis. We take each dreaded step with them, waiting for the lurking aquatic hunters to strike. The constant cat and mouse dichotomy of survivors and creatures work beautifully with the setting, and crafts ample anxiety-inducing buildup to the creatures’ big reveal.

How the audience is introduced to the creatures is another superb bit of pacing. As the seafloor is an inherently dark environment, the survivors rely on the chassis and gear at their disposal. One scene, in particular, highlights the suits’ night vision feature, revealing the haunting outline of a creature hovering in the darkness behind a crew member. Given the film’s brisk 95 minute runtime, it never wears out the creatures’ welcome. These initial brief glimpses quickly make way for sheer hordes of finned foes that block out what little light is available in underwater scenes.

Given my love of creature features, I always wish we had one more scare or scene displaying the technical wizardry that brought these horrors to life. Had Underwater not weaponized its aquatic setting as pristinely as it did, I would have found this to be a more considerable detriment.

What allowed the film to be so bone-chillingly tense for me is its throttling my fear of the sea. The ease with which one could become lost on the ocean floor will forever haunt me. Spin around in a panic, and you immediately lose the sense of which direction you came from, forever lost within an underwater labyrinth.

January is notoriously viewed as a month where schlocky horror films, with little studio faith, are released. Underwater unequivocally disproves this conventional notion by providing constant tension and terror. First and foremost, Underwater is a ton of underwater creature fun. And sure, some of its scientific jargon can, at times, be silly or easily explained away. And yet, for as short a film as it is, I was never not fully engaged and anxiously awaiting the next terror to present itself. The lingering dread of its atmosphere heightens even the most basic of momentary jump-scares and genuinely payed off during its biggest scares.

Verdict
Underwater makes waves by crafting nerve-wracking deep sea terror and a suffocatingly bleak atmosphere.
7.5
Cultured Vultures is a pop culture website established in 2013 covering all things gaming, movies, and more. We eat your words.
All The News On The Biggest Games