In The Orchard REVIEW – Poignant and Absolutely Moving

Warning: This film will leave you in a shattered, heartbroken state. 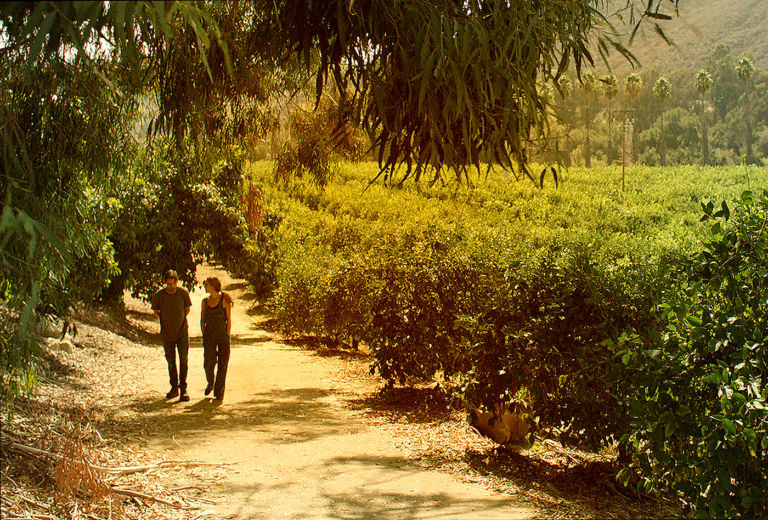 Christopher Knoblock’s In The Orchard is a strikingly beautiful film. Every frame and moving image so lovingly pieced together, shining in every moment – a labyrinth of suns even amidst all the despair and grief. The cinematography is so expertly done, and it is clear to see from the opening moments of the film. There is the frenzy of rushing and activity, which then transitions to slow, out-of-focus shots. This is to mark the fugue state that now inundates Charlotte’s life.

Before the death of her husband and son, she had bustle in her life, but now there’s no one to live for, there’s no need to hurry anywhere for anything – she has lost both the role of mother and wife. Lead actress Dana White (who also wrote and produced this movie) is luminous and absolutely poignant in her role. She communicates so much from so little, her performance so authentic and unfiltered. Death is not a pretty thing in her hands, her dance with grief so palpably intense that you find yourself unable to look away.

The vastness of the property and the beauty of the orchard juxtapose against her solitude and bleak loneliness. This is a woman struggling to hold on, and you wonder what will be the sharp point that snips the string that keeps her tethered to life. Her days are now filled with empty platitudes of polite calls to tell her how sorry they are for her loss, or family members who want to help but are at a loss as to how to help her.

Through it all, Charlotte cleans obsessively and cooks meals for herself, a faux busyness that wears her down at the end of the day when she goes to sleep in an empty bed. What I love so much about the film is how it communicates Charlotte’s thoughts to us through the visuals, where all she has to do is stare at three place settings at the table, and linger over broken pieces of a cup for us to know how she feels.

It all feels very bleak for Charlotte, until Nick (Jonas Ball) enters her life. We don’t know much about Nick, except that he served as a Marine in Iraq and Afghanistan. Charlotte lets Nick into her life gradually, aptly symbolised by how he starts off staying in property outside of her house, merely a hired hand to work on the orchard, before moving into the interior spaces of her home. Ball makes absolute use of his physicality as an actor, presenting Nick as always fidgety and anxious, a symptom gained from his service as a Marine.

Initially, it was just nice for Charlotte to prepare meals that involved more than one person, but slowly, it evolves into something deeper. Bound together by their own personal ghosts, they find themselves seeking comfort in each other. The romance is well done and comes across as a natural development of the plot, not to sell a mere contrivance that love heals all wounds, because it clearly doesn’t. There are broken parts of each of them that the other will not be able to fix, but the holes seem less gaping when there is someone to hold at night, to make love to with a quiet passion that gives them the sense that they are still alive in the world. What I like about the pairing is this natural air of intimacy the two share. It doesn’t feel like an exaggerated romantic product, and genuinely feels like two real people in a relationship. I almost feel like a voyeur at times watching the two of them together.

It does feel a little too good to be true, and we see the cracks appearing in the relationship, with Nick’s past catching up with him and inundating Charlotte’s life as well. The bed the two of them share, instead of bring peace and respite, does nothing to steady Nick. While Charlotte sleeps, he slips back into his old familiar world of violence. Is it PTSS (Post Traumatic Stress Syndrome) or is Nick running away from something tangible? There is much tension for the viewer here, as we feel the dangerous ground Charlotte seems to be on, yet we don’t want her to lose what they have built together.

The switch in direction of the narrative, where we hop from Charlotte’s perspective to see more of Nick’s interior world of paranoia, is such a bold decision and choice. The parts should feel incompatible, with the earlier section of the film so numb with grief switching to the frenzied action sequences towards the end; but I absolutely enjoyed the pairing of the two. The scenery of the film changes as well, where we move to more darkened interior spaces and spend less time outside. The soundscape is simple but effective, comprising mostly of scenic sounds like crickets in the nighttime or the rustle of the leaves, before transiting to the more chaotic sounds that Nick hears inside his head.

The conclusion of the film shattered me; I was in little splinters all over the floor, much like the broken cup Charlotte had to clean up at the beginning of the film. Grief is like that I suppose, it leaves you broken, overwhelmed, filled to the brim with pain and hurt that you see no end in sight. Eventually, there comes a time where you pick up the pieces and rearrange yourself back together, crossing the bridge to the other side, where life awaits.

Verdict
Christopher Knoblock's In The Orchard is a strikingly beautiful film. Every frame and moving image so lovingly pieced together, shining in every moment - a labyrinth of suns even amidst all the despair and grief.
9
Watch In The Orchard
Cultured Vultures is a pop culture website established in 2013 covering all things gaming, movies, and more. We eat your words.
All The News On The Biggest Games