Good morning, and in case I don’t see ya, good afternoon, good evening, and good night!

Watching The Truman Show has been a long time coming. It’s one of those films that is so iconic that you don’t need to have watched it to know the premise. For that reason, I was almost a little apprehensive that the film would have been ruined for me. I wish I could have seen it through the eyes of someone in the 90’s, but I honestly don’t think the appeal has been lost at all.

The Truman Show, if you somehow don’t know, is a 90’s film that stars Jim Carrey as Truman: the unknowing star of a reality TV programme. His life, watched from birth, is a carefully fabricated “reality” filled with actors, proud of their roles and conducted by the shows creator who watches from above. The film carefully examines the dangers of the MTV generation and probes into the notion of playing god. People from all over watch the show as mindless zombies without once questioning the ethics – that is except for ex-star Sylvia. The world Truman lives in has a Tim Burton-esque quality with overtly smiley neighbours, trimmed suburbia and a very 1960’s style housewife.

Approaching any 90s Carrey film always seems to be a gamble. Will we get goofy whacky Jim Carrey or will we get serious relatable Jim Carrey (or a hybrid – see Liar Liar). The Truman Show is serious Jim Carrey, but not only that, it skilfully takes on very dark twists and turns. Although off-key, the show doesn’t seem too terrible until we understand that Truman has lost his “father” in a boating accident at a young age. Even worse when it unravels that this was a ploy to stop Truman from crossing the water. Admittedly , I feel you could criticise this film for focusing more on being a conceptual masterpiece than being gripping storytelling (the exception being the escape at the end). 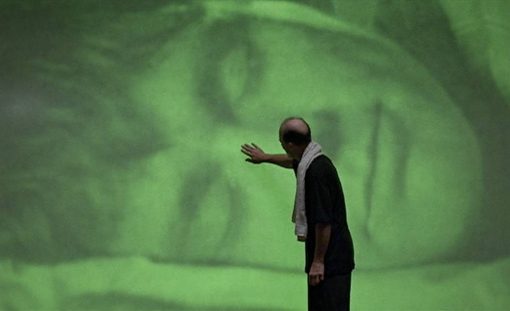 However, this doesn’t stop The Truman Show being fantastically well put together. The opening credits are the actual ones for the reality programme The Truman Show as opposed to the credits of the film itself. There is something uncanny about this which highlights the idea that we live in a world where reality shows that exist to exploit people are a thing, which isn’t too far away from reality. The film is absolutely stunning in terms of camera work: the angles and shapes hugely reflect not only something that you would expect to find on TV, but also have a raw sense of voyeurism that perfectly captures the almost perverse way we as a society take entertainment from exploitation. I also enjoyed the way they threw in the product placement, subtly at first and then addressing it full-on, explaining how it makes the money. It is half absurd and half sickening to think of turning  a profit on somebody’s life such as that. The value of life further decreased when we discover that Truman was one of 6 “unwanted” children that could have been chosen.

The film is fantastically acted. It can be easy to forget that Carrey is a legitimately fantastic actor even without pulling silly faces. However, this is another Carrey film where he plays someone with such sincerity that you cannot help but feel your heart go out to them. Christof (played by Ed Harris) the creator is darkly sinister, largely in his ability to act as though nothing is remotely wrong about what he is doing. His god complex is astounding, preferring to see his creation suffer in order to stick to his divine plan. Equally, Laura Linney is simultaneously delightful and terrifying in her ease at being the perfect housewife for show. Her comfort in having a fake life is unnerving.

The Truman Show is definitely a modern classic and one I think could have easily made the top 50.  I had to step back from the laptop and re-evaluate my life after watching as my brain imploded and bordered on an existential crisis. What’s the point in making films if you can’t do that?