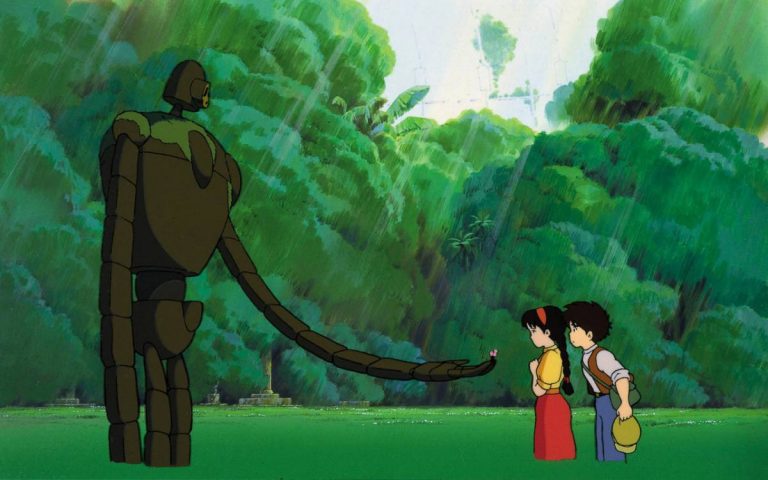 Castle in the Sky

250 films, 250 reviews. This is a pretty crazy idea, but who doesn’t love a challenge? Here at Cultured Vultures we’ll be counting down the IMDb Top 250 with a review for each from one of our dedicated film writers. Everything from Goodfellas to Casablanca will be covered over the next year or so for you film lovers to enjoy. So you can’t say we don’t spoil you, you lovely lot. – Ashley, Project Lead

Also known as ‘Laputa’, Castle in the Sky is one of seven Studio Ghibli films currently in the IMDB’s Top 250. The world-famous Japanese studio is well-known for producing dark and beautiful family films, many of which are well-deserving of their position in the IMDB’s hall of fame. While Castle in the Sky is certainly comparable to the other Ghibli films in terms of technical achievement (and is especially commendable given that it’s one of the earlier productions), it’s not one of the stronger efforts from Miyazaki et al.

Castle in the Sky follows Sheeta, a mysterious girl with amnesia, and an ambitious Luke-Skywalker-type named Pazu as they go on the run from steampunk pirates and Nazi-inspired government operatives (all flying Jules Verne-ish fantastical flying machines, of course) through a visually stunning alternative world. Their aim is to unravel the secrets behind Sheeta’s identity. Also, there’s a big robot and stuff.

While it almost goes without saying that the art direction and animation are incredible for its time, the story-telling and characters in Castle are uncharacteristically poor for Miyazaki. The premise is flimsy and predictable, the villain and the reveal turn out to be disappointing, and the suspenseful action sequences peppered throughout don’t really meet the standard that’s been set by the Ghibli films that came before or after its release. As a Ghibli fan, I couldn’t help but feel this was a trough among the studio’s almost uniform peaks.

I’m not just ripping on it because it’s one of the older ones either; I caught this movie during a Ghibli-binge I went on a couple of years ago, and I found it impossible not to make comparisons to the conceptually superior Nausicaä of the Valley of the Wind which was made two years earlier. As I’m sure the impending Cultured Vultures review of Nausicaä (which will be #201 in this list) will reveal a lot of the visual themes which are similar (cool flying vehicles with a rustic steampunk feel, alternate universe, etc.), but in Nausicaä, the story and characters are far stronger and much more memorable. Watch Laputa and Nausicaä within a week or two of one another; they’ll blend together (but you’ll only be able to remember the plot of the latter).

Perhaps it’s unfair that I’m judging Castle in the Sky with unrelenting comparisons to the other Ghibli films; at times, it’s still an exciting other-world adventure which is undeniably beautiful.  Joe Hisaishi’s score is both serene and stirring as usual, and complements the visuals perfectly. The pacing of the whole affair isn’t quite up to scratch (it slows down to a crawl after the first big chase scene), but looking at it as a typical high-concept animated adventure, there’s a lot to enjoy.

With that said, I can’t help but feel that this is one of the more forgettable Ghibli films – the type that you’d only watch because it’s in the box set. If you’re a Miyazaki fan, it’s an essential watch, but for the casual observer of Studio Ghibli (and anime in general), you can probably skip this one in favour of the aforementioned Nausicaä. Either way, it wouldn’t be in the Top 250 if it were up to me.