Sometimes you can find some gems while dumpster diving, other times you get Tony Hawk's Shred. 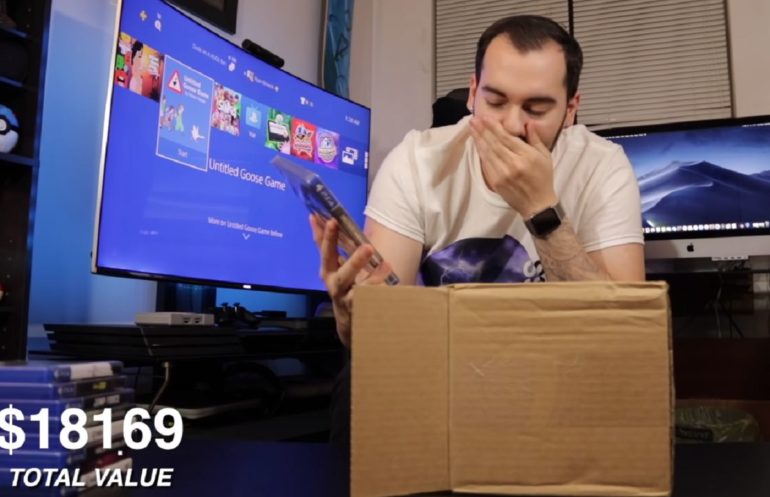 I like surprises. Not surprise mechanics, but I genuinely love seeing something I didn’t expect — my head’s still spinning from around half of Lost, all these years later.

I also like video games, believe it or not. My roughly 3000 articles on this very site can attest to, yeah, I like to rip and tear with the best of them. Once upon a time, I also loved to collect video games, collating the physical editions of my favourite franchises and then sorting them into alphabetical order in the hopes of one day impressing someone. That, as you might expect, never happened.

If you mash video game collecting with nice surprises, you get “mystery games unboxings,” a neat niche of YouTube content that I can’t get enough of.

In essence, a YouTuber will trudge on over to eBay, find a mystery box full of random games and then unbox them on camera. That’s it. There’s no amazing editing required, just the gradual unveiling of some random video games from a box, a splurge of Madden and Hannah Montana tie-ins all but guaranteed.

Mystic, a PlayStation-orientated content creator, has been making a killing off these videos lately with them being some of the most popular videos on his channel. The below haul features him unpacking a mystery box that cost $70 but with an overall worth of $200.

The array of games really is something to behold. From Shrek 2 on the original Xbox to Pure on PS3 (a game that made me go “oh shit, that was a thing”), it’s like a weird and random step back through gaming history. It’s also a reminder of how much shovelware was on the Wii — somebody really needs to go on trial for littering all over that console.

In another video, Mystic enjoys one of the most outrageous hauls ever, getting a tonne of modern (sealed, no less) games including Modern Warfare for a total of $40 with a value of $200.

When he pulled out that Modern Warfare, dear reader, my thighs tensed with such primal joy that I almost gave myself cramp. What a revelation. What a steal. What an absolutely lucky bastard. It later became clear that these games were damaged from Target, though only in the sense that the discs had become loose within their cases.

There are a few other YouTubers who do similar things, and I’ve pretty much watched them all. Unfortunately, as mystery boxes don’t seem to appear on eBay that often, there’s not a regular churn of videos featuring them. For me, that’s a large part of why this content is so appealing; they’re not everywhere and I feel like almost every single one is legitimate.

It’s not just the games themselves that fascinate me, but also what condition they’re in. The state of a box usually says a lot about where that game has been, if its owner looked after and what that says on their opinion on the game. In some cases, a pristine box of a random game (a Disney singing game tie-in, for instance) makes me think of how few copies of it must have sold, it just being sat on some retail shelf somewhere for years before some job lot scooped it up. Conversely, a dog-eared copy of GTA III shows that the game has been played to the extent it deserves — I had many copies of that game in my childhood, each re-bought after being caught by my parents with an 18-rated game.

What’s inside of a case also tells its own story, and kind of shows how much the industry has changed over the decades as well. There are regularly little slips for services that no longer exist, promotions for other games from the same publisher, and even online passes. Remember those? Christ, that was a whole thing for a while, wasn’t it?

I don’t think I will ever get tired of watching these videos, even if they’re almost always dominated by Madden bilge throughout the years and an absolute swathe of party titles that nobody really wanted. I will persevere, though, just on the off-chance, that sweet, sweet moment of glory, that a true icon of gaming history is unboxed.