Another collab on the horizon. 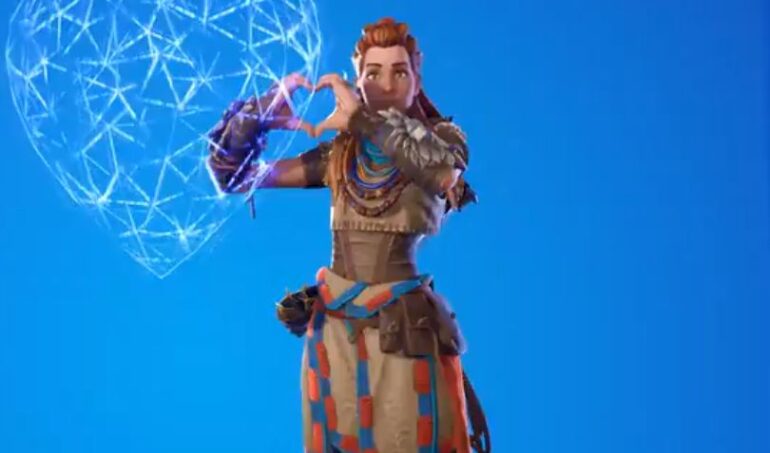 It’s been a quiet time for crossover skins in Fortnite since the launch of Season 6, but it looks like it’s time for one of the biggest yet: Horizon’s Aloy is coming as a skin with her own LTM.

Revealed within the files for v16.20, Aloy will be teaming up with Lara Croft for the LTM, which will be focused on using bows and dealing with wildlife. Seeing as how both characters are gaming icons who are famous for using bows, as well as the fact that this season is trying to take things back to nature, it couldn’t really make more sense.

There are a couple of encrypted files as of this writing, which will surely be the Aloy skin herself.

Here’s the lowdown on the Lead Alloy LTM:

Strings from the new LeadAlloy LTM:

– "Use loot from wildlife and technology to upgrade your weapons"
– "All Weapons can upgrade to legendary quality"
– "Keep an eye out for wildlife, you never know what might be lurking in the bushes"

– “Use loot from wildlife and technology to upgrade your weapons”
– “All Weapons can upgrade to legendary quality”
– “Keep an eye out for wildlife, you never know what might be lurking in the bushes”

As well as that, it looks like Aloy’s bow will also be coming to the game as weapon by the name of the Splinter Bow:

It doesn’t seem like this bow has anything special about it, such as a unique ability, but time will tell on that front. It’d be incredibly toxic if you could shoot other players with it and trap them in place, just like Aloy does while she’s hunting down giant robot animals.

Here’s what the Aloy skin in Fortnite will look like, along with all of the cosmetics, courtesy of Hypex:

And a glimpse at everything in the set in-game:

Pretty accurate, right? I love the Heart-rizon emote, which is a pose you can strike in Photo Mode in Zero Dawn.

If you’re curious when Fortnite will be getting the Horizon crossover skin and LTM, it will be sooner rather than later. All of the Horizon Zero Dawn cosmetics will land in the Item Shop skin on April 15th. You will even be able to get them for free by playing in a tournament.

In terms of how much the Horizon skin will cost you in Fortnite, based off the previous Kratos skin, Aloy should set you back 1,500 V-Bucks for just the skin. You will almost certainly be able to buy extra cosmetics to go alongside Aloy, like pickaxes and back blings, so there may even be a complete bundle for 2000+ V-Bucks.

If this sounds like a bit of a strange crossover to you, it’s actually one of the most sensible Epic have ever done. Not only does it team up Lara Croft and Aloy, which is a bit of a dream crossover, but it also helps to market the new Horizon game on PS5 and PS4, which is due to release sometime this year but probably won’t. You know, what with the world being consumed by flames, and all that.

MORE FORTNITE: Brie Larson Is Getting Her Own Fortnite Locker Bundle