Although Heaven's Vault boasts no groundbreaking animations, an emphasis on dialogue and language make it stand out. 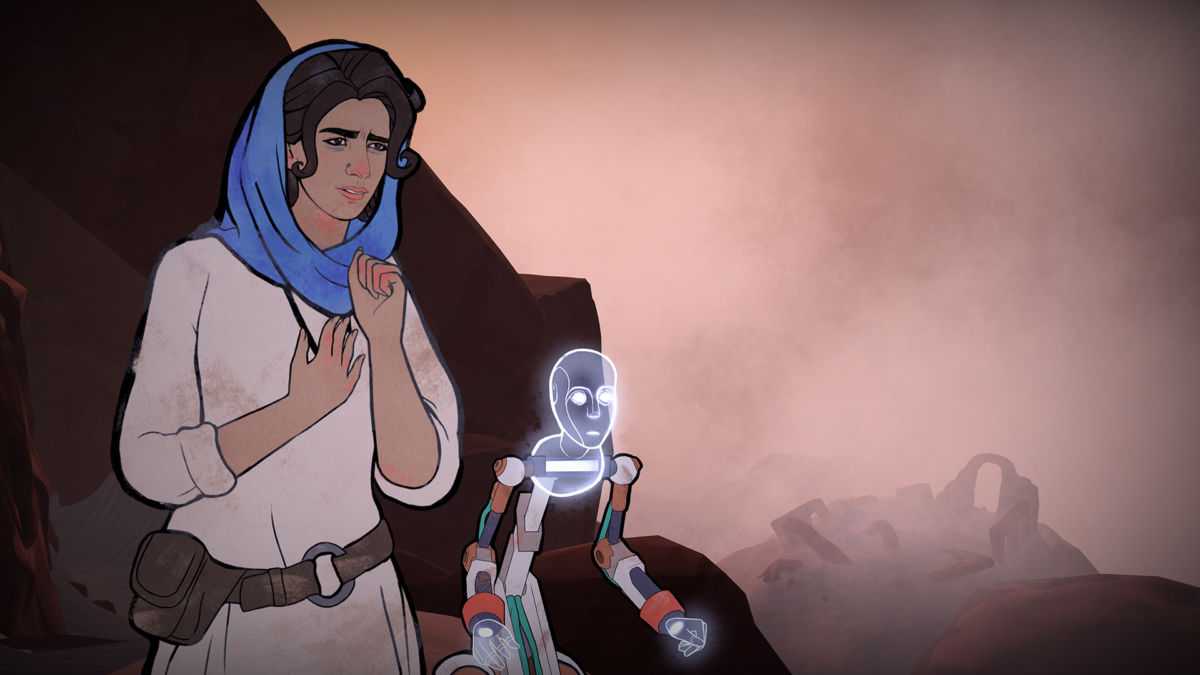 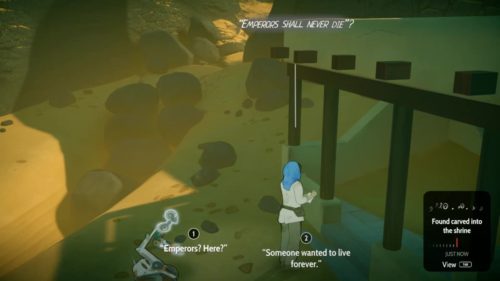 You don’t have to look very far today to find a game capable of shaping its narrative around the player’s choices. With more developers than ever experimenting with ways to make a playthrough entirely unique, even genres with linear roots — such as platformers and puzzlers — have been adjusting their conventions to fit the growing trend.

But when Inkle described how their own puzzler, Heaven’s Vault, was going to integrate a story that fluidly reflects the player’s choices, I was hesitant. Yes, the notion is enough to pique interest and earn the game a download, but do the developers ultimately hold out on their word to mould an entire narrative thread around players deciphering a handful of ancient symbols? 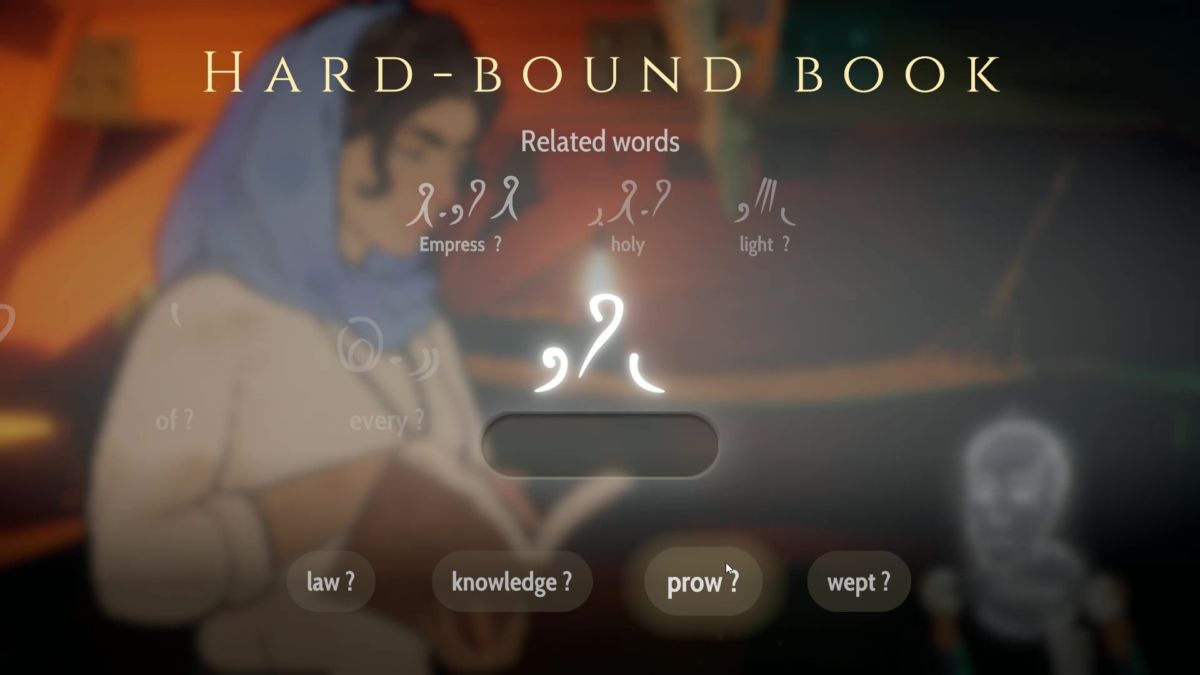 They most certainly do. The minute I started Heaven’s Vault, gorgeous sounds of a cello introducing an emotional and unexpectedly cinematic main theme was enough to assure me that there was more to this game than meets the eye.

You play as Aliya, an archaeologist sent on a mission to track a missing academic by following traces of mysterious ancient relics scattered throughout the Nebula. Before embarking, she is presented with her sixth companion robot, aptly named ‘Six’, who will analyse newly-gathered artefacts and, of course, offer ironic and hilarious responses for any snide ‘robotist’ comment you think you’re clever in making. 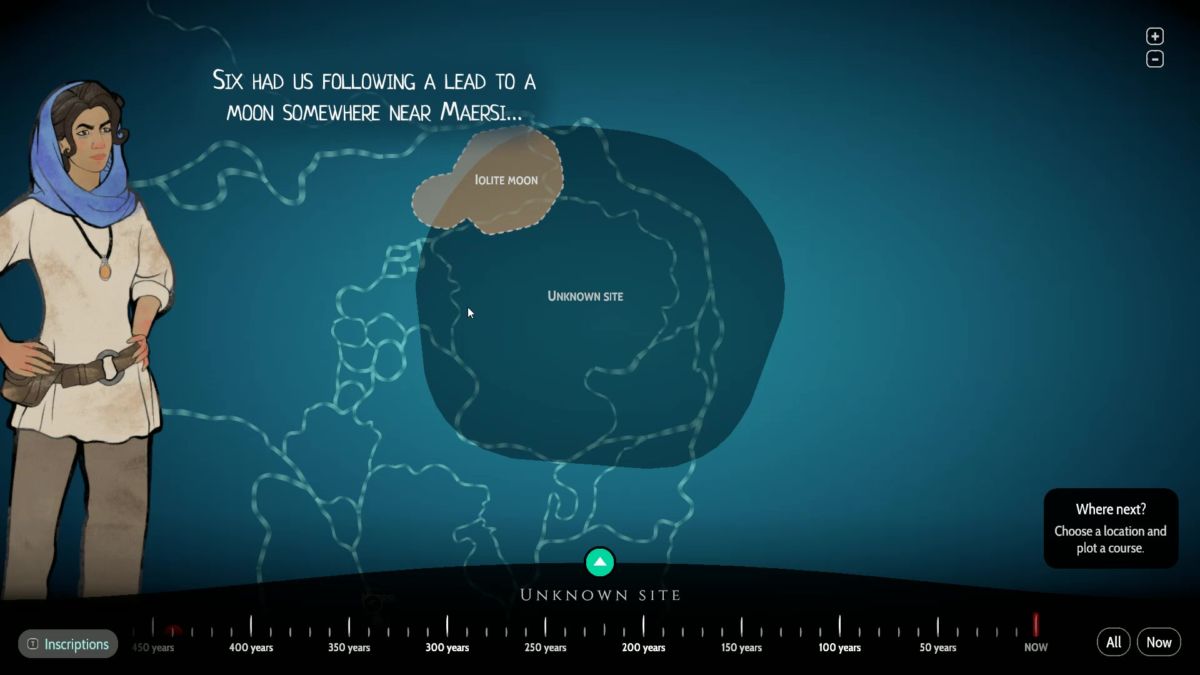 Once you leave the modern haven of Iox University in the opening segment, the entire Nebula is virtually yours—and to be frank, I was astounded by the sheer scope of locations Heaven’s Vault had to offer. While traversing space, you are free to visit a vast and diverse collection of civilisations, environments and lost regions of early history waiting for you to discover. From the verdant farm moon of Maersi to the slums of Elboreth and dozens of forgotten settlement moons in between, there’s seriously no shortage of places to explore.

People have taken a single glance at the graphics and called Heaven’s Vault ‘cheap’, but I implore you to not undervalue its simplistic style. Inkle, after all, proves that you don’t need photo-realistic textures to convey a believable interactive world. The combination of 2D character models rendered onto stunning 3D landscapes is so effective in showing off the Nebula’s vibrant colours and soft textures in the most consistent way, with charming ‘snapshot’ walking animations that are surprisingly fluid when worked into the environment. Close-up faces were often fuzzy and certain poses could get clunky during my playthrough, but these barely put a scratch on the beautiful art style that carries Heaven’s Vault with a sparkling polish. 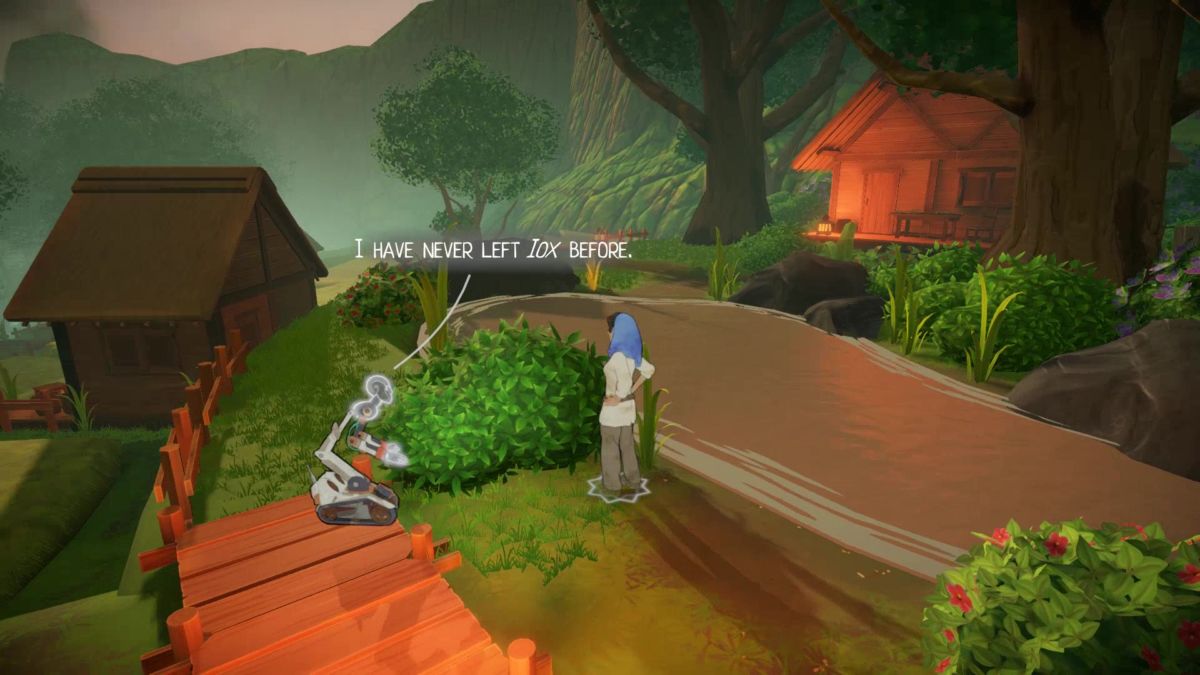 Although I’m reluctant to apply generalisations behind the typical ‘size’ of indie games, I have to admit that I did not expect Heaven’s Vault to be as big as it is. It’s deceptively vast, with a map, language system and world lore that surpasses even large budget games. What truly makes it shine is in how it never loses itself in its broad scope, and that its expansive size is justified by the amount of things Aliya and Six can interact with.

Throughout your travels across various moons, you will be investigating dozens of artefacts, pieces, treasures, knick-knacks and any other synonyms for ‘relic’ you can think of as you attempt to trace them back to their roots. The more you collect, the more regions will be unlocked on the map for you to visit and explore even further. Although each area you dock in is relatively small, I was impressed by the amount of ground available for exploration, and while it isn’t difficult to find artefacts, there is always a meaning in where they are found that makes your ‘detective work’ all the more engaging. Even when revisiting moons, I was still discovering new areas that I didn’t even know were reachable and was always rewarded with encountering a new character or valuable clue. 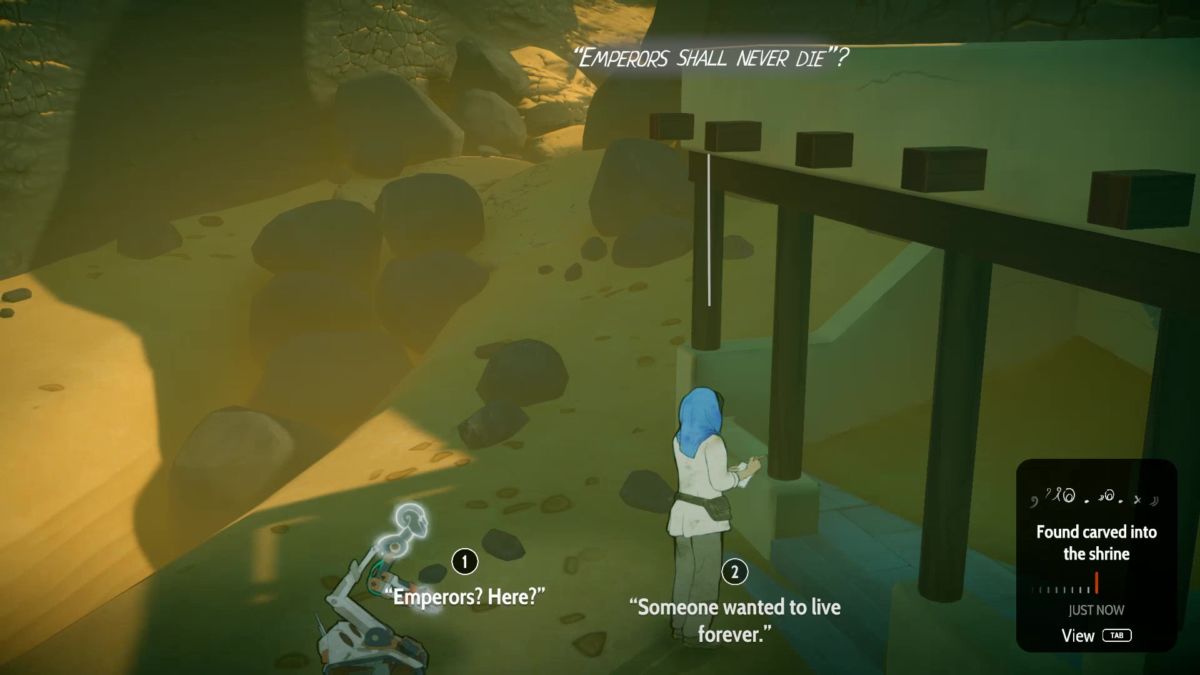 But that isn’t what I most looked forward to when discovering another trinket; it’s when Aliya notes that something has been inscribed on it.

The language mechanic can take a while to wrap your head around (particularly for my slower-than-average brain), but you’ll feel like a true archeologist once you get the hang of things. In this distinctive albeit poorly-explained new form of gameplay, you must essentially guess the meaning of symbols as they are presented in a phrase, sometimes short, sometimes intimidatingly long. When you match a word with a symbol, it will be associated with it and used for comparison in future translations, forcing you to think outside of the box as you must consider broader contexts, lore and similar-meaning words. The catch? You will likely never be told whether you’re correct, so when an incorrect guess influences the translation of the next artefact you come across, a chain reaction of wrong decisions can lead to an entirely different perspective of their meaning.

And this is a notion Inkle conveys with mastery. Every guess, no matter whether it is right or wrong, becomes embedded in the dialogue between Aliya, Six, and other characters in the vicinity. Every playthrough will have a timeline underlying your unique journey, which will update according to your discoveries and, most prominently, your translations. As you unfold the mystery surrounding the professor’s disappearance, your inscriptions will convey a different story based around the one you decipher. I had to stumble around my guesses for a time, however, as Inkle makes it difficult to find past guesses you want to make changes to as you’re forced to filter through dozens of past inscriptions. 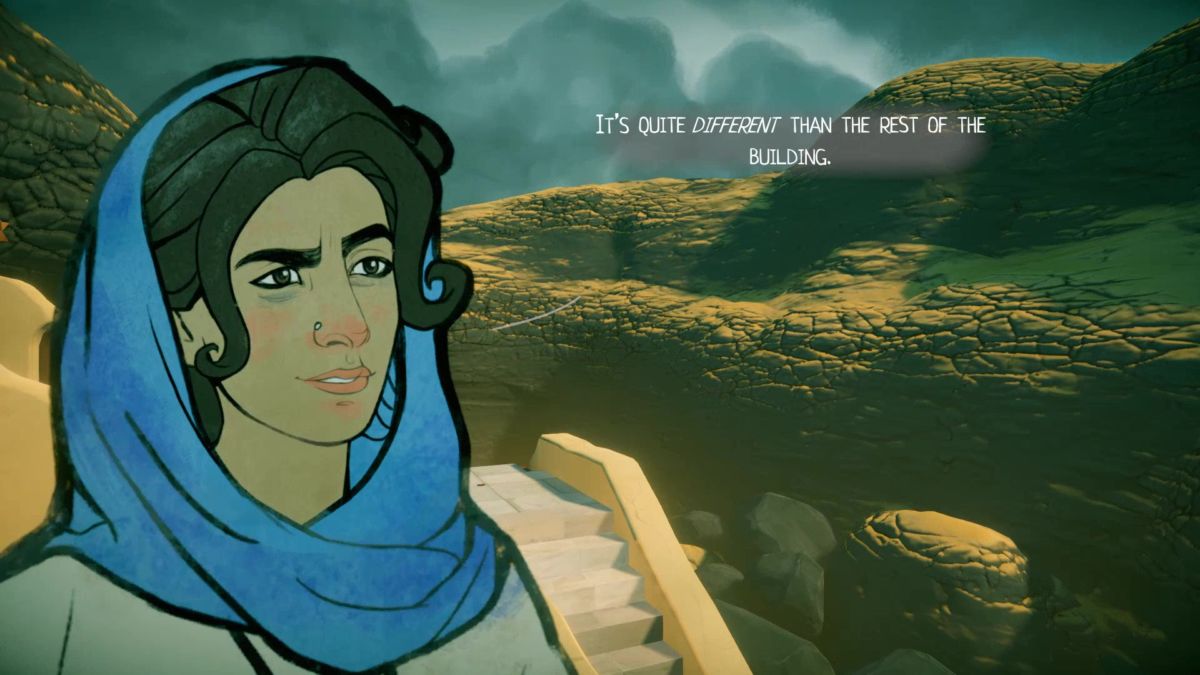 I was also confused at how certain phrases I guessed ‘had to be incorrect’ even when they made grammatical sense and matched similar symbols, but hey, perhaps this difficulty was to simply add an edge of realism, after all, learning a language is never as simple as sitting through a tutorial. This only makes it all the more gratifying when your guesses are right.

But perhaps the most rewarding aspect of Heaven’s Vault is its dialogue. It takes a remarkable team of writers to construct conversation that is consistently fresh, meaningful and, of course, reflective of the characters, and for a game with no voice acting beyond Aliya’s occasional interjections (whose crystalline quality I savoured), I was baffled by how well-written every line was. The quantity also equalled the quality, as there are seemingly endless prompts and choices for talking as you walk, from making remarks about the area to answering questions that Six peppers you with. What’s more fulfilling is that even seemingly pointless subjects of conversation become added to your unique timeline, so you are continually discovering clues to ancient lore by simply responding to a dialogue prompt. It’s an ingenious mechanic that keeps you engaged with a world more vivid through every exchange. 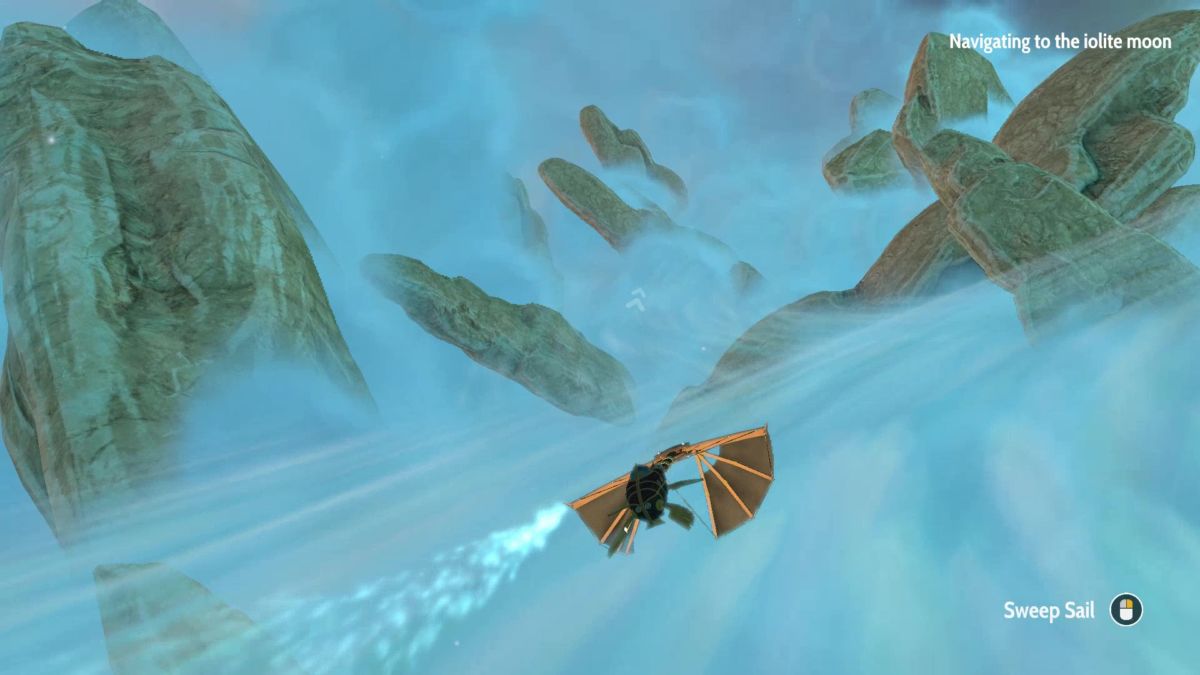 With the sheer amount of dialogue presented in ‘bubbles’ of text above characters, Heaven’s Vault actually manages its pace and identification with who is speaking fairly well. My only issue was when certain text would jump around as much as someone who desperately needs a bathroom. Sometimes it wouldn’t appear at all and the characters would just stare at each other with an awkward silence, only for it to leisurely float toward the bottom corner from offscreen. Thankfully, it wasn’t a frequent occurrence, but it did get frustrating when important pieces of information were hovering half-concealed on the left side of my monitor.

While we’re on the subject of flying around the screen, a gameplay mechanic I did not expect to see was the ability to steer Aliya’s mighty airship, the Nightingale, across the rivers of the Nebula. In a Kingdom Hearts-style of interactive planet hopping, you are free to travel along a myriad of pathways to reach your waypoint destination. It’s a seamless and welcome addition to the gameplay with smooth controls, dampened only by its repetition. Sure, you’re kept on the lookout for certain shipwrecks and the occasional stray island where Six can recover new artefacts, and your journey is accompanied by enticing lines of dialogue as you fly, but even the beautiful music couldn’t soothe my irritation when I found it took me a little under 10 minutes to soar (or crawl) north from Iox to the market moon of Renaki. The game allows you to ‘rest’, which essentially works as fast travel while Six takes the helm, but if you are seeking to explore regions beyond the populated moons, you are going to have to navigate there yourself, which can sadly be a yawn-inducing frustration.

Regardless of the travel time, there is always something new to see in Heaven’s Vault, and I was constantly taken aback by Inkle’s sheer and heartfelt attention to detail. Every turn of the plot, new character and puzzle was enough to see me through to the mystery’s end, and somehow even the minimal gameplay adds meaning to the story in a way few other puzzlers manage. No two players will ever experience Heaven’s Vault the same way, and it is this very uniqueness which makes each playthrough all the more worthwhile.

Verdict
Although Heaven's Vault boasts no groundbreaking animations, an emphasis on dialogue and language truly makes it stand out as an innovative puzzle game. With characters as colourful as the worlds you visit, you are guaranteed to be swept into an intriguing storyline shaped exclusively by you.
8